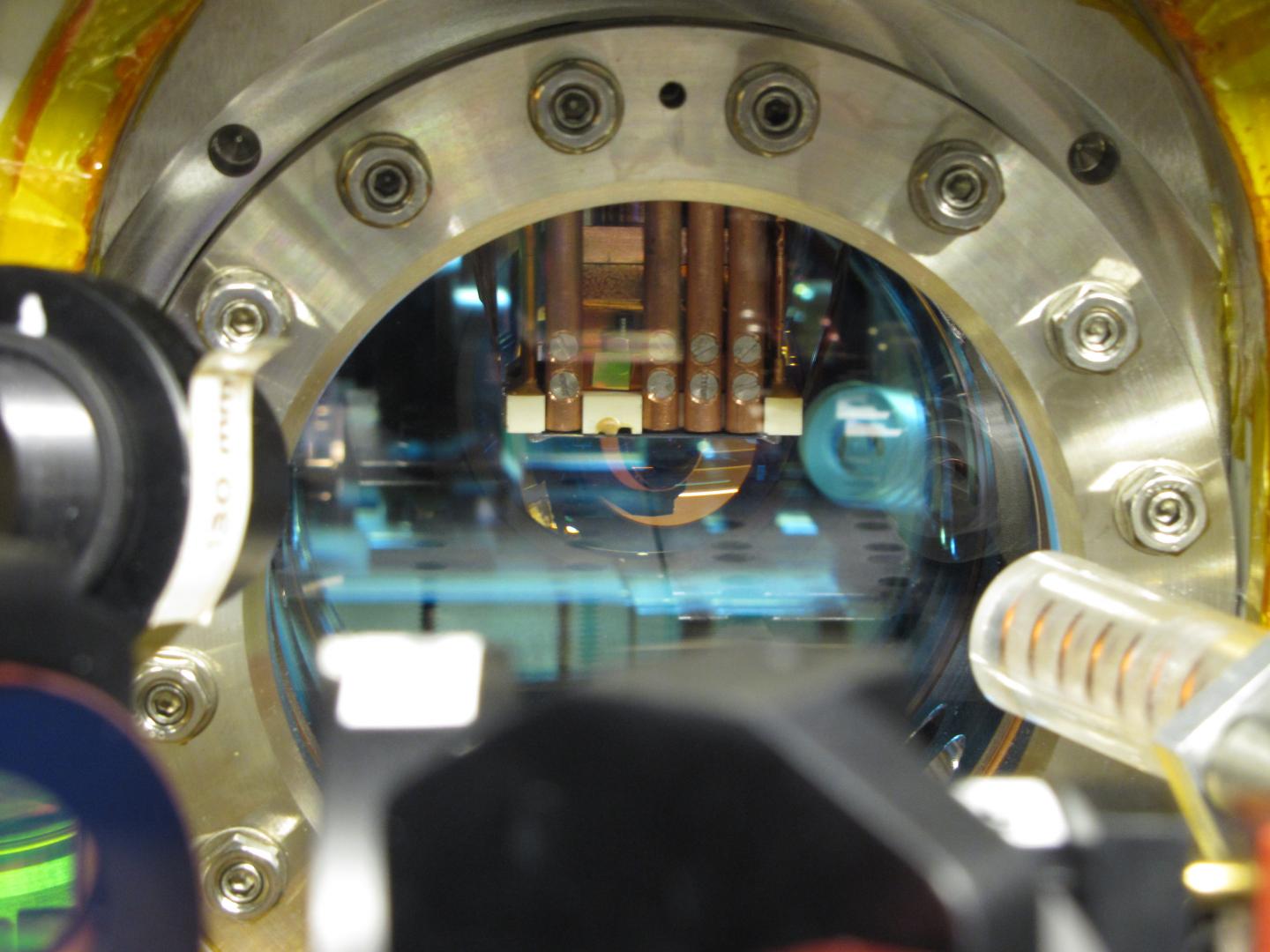 These are experiments at TU Wien (Vienna) — with a quantum chip, controlling a cloud of atoms.

What happened right after the beginning of the universe? How can we understand the structure of quantum materials? How does the Higgs-Mechanism work? Such fundamental questions can only be answered using quantum field theories. These theories do not describe particles independently from each other; all particles are seen as a collective field, permeating the whole universe.

But these theories are often hard to test in an experiment. At the Vienna Center for Quantum Science and Technology (VCQ) at TU Wien, researchers have now demonstrated how quantum field theories can be put to the test in new kinds of experiments. They have created a quantum system consisting of thousands of ultra cold atoms. By keeping them in a magnetic trap on an atom chip, this atom cloud can be used as a “quantum simulator”, which yields information about a variety of different physical systems and new insights into some of the most fundamental questions of physics.

Complex Quantum Systems — More than the Sum of their Parts

“Ultra cold atoms open up a door to recreate and study fundamental quantum processes in the lab”, says Professor Jörg Schmiedmayer (VCQ, TU Wien). A characteristic feature of such a system is that its parts cannot be studied independently.

The classical systems we know from daily experience are quite different: The trajectories of the balls on a billiard table can be studied separately — the balls only interact when they collide.

“In a highly correlated quantum system such as ours, made of thousands of particles, the complexity is so high that a description in terms of its fundamental constituents is mathematically impossible”, says Thomas Schweigler, the first author of the paper. “Instead, we describe the system in terms of collective processes in which many particles take part — similar to waves in a liquid, which are also made up of countless molecules.” These collective processes can now be studied in unprecedented detail using the new methods.

In high-precision measurements, it turns out that the probability of finding an individual atom is not the same at each point in space — and there are intriguing relationships between the different probabilities. “When we have a classical gas and we measure two particles at two separate locations, this result does not influence the probability of finding a third particle at a third point in space”, says Jörg Schmiedmayer. “But in quantum physics, there are subtle connections between measurements at different points in space. These correlations tell us about the fundamental laws of nature which determine the behaviour of the atom cloud on a quantum level.”

“The so-called correlation functions, which are used to mathematically describe these relationships, are an extremely important tool in theoretical physics to characterize quantum systems”, says Professor Jürgen Berges (Institute for Theoretical Physics, Heidelberg University). But even though they have played an important part in theoretical physics for a long time, these correlations could hardly be measured in experiments. With the help of the new methods developed at TU Wien, this is now changing: “We can study correlations of different orders – up to the tenth order. This means that we can investigate the relation between simultaneous measurements at ten different points in space”, Schmiedmayer explains. “For describing the quantum system, it is very important whether these higher correlations can be represented by correlations of lower order — in this case, they can be neglected at some point — or whether they contain new information.”

Using such highly correlated systems like the atom cloud in the magnetic trap, various theories can now be tested in a well-controlled environment. This allows us to gain a deep understanding of the nature of quantum correlations. This is especially important because quantum correlations play a crucial role in many, seemingly unrelated physics questions: Examples are the peculiar behaviour of the young universe right after the big bang, but also for special new materials, such as the so-called topological insulators.

Important information on such physical systems can be gained by recreating similar conditions in a model system, like the atom clouds. This is the basic idea of quantum simulators: Much like computer simulations, which yield data from which we can learn something about the physical world, a quantum simulation can yield results about a different quantum system that cannot be directly accessed in the lab.