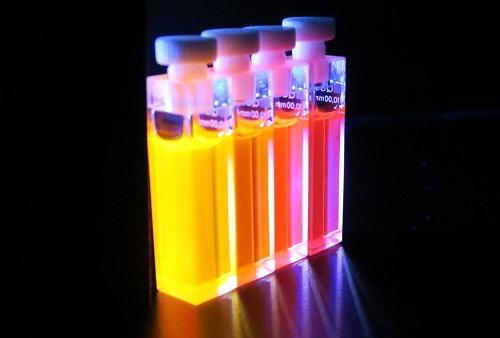 This is fluorescence of the conjugated polymers in solution. Source: © 2017 Hubert Piwonski

A strategy to produce highly fluorescent nanoparticles through careful molecular design of conjugated polymers has been developed by KAUST researchers. Such tiny polymer-based particles could offer alternatives to conventional organic dyes and inorganic semiconductor quantum dots as fluorescent tags for medical imaging.

Conjugated polymer-derived nanoparticles, called Pdots, are expected to transform several areas, including optoelectronics, bio-imaging, bio-sensing and nanomedicine, due to their intense fluorescence, high stability under exposure to light and low cytotoxicity. Their spectroscopic properties are tunable by tweaking the polymer structures. This makes it essential to consider their design at the molecular level.

Bio-imaging applications require nanoparticles small enough to be eliminated from the body and strongly emit light in the far-red to near-infrared range. However, current design and fabrication of Pdots have mostly relied on empirical approaches, hindering attempts to manufacture these ultrasmall nanoparticles.

To meet this challenge, Dr. Hubert Piwoski and Associate Professor Satoshi Habuchi came up with a systematic method that enhances the performance of Pdots. Habuchi explained that his team aimed to create Pdots of a smaller size and brighter fluorescence by using conjugated polymers, whose backbone of alternating single and multiple bonds enables so-called π electrons to move freely throughout the structure.

For the first time, the researchers opted for twisted, instead of planar, conjugated polymers as building blocks to generate their Pdots. Existing Pdots usually exhibit lower fluorescence intensity than their precursors as result of complex inter- and intra-chain photophysical interactions within particles.

According to Habuchi, this trial was a shot in the dark — his team initiated the project without really knowing what would eventuate — but they were still surprised by the fluorescence behaviors of these Pdots compared to their previously investigated analogues.

Preliminary results suggest that the newly synthesized nanoparticles were the smallest and brightest Pdots reported to date. “Therefore, we hypothesized that the twisted shape of the molecules is responsible for the very bright fluorescence due to the suppression of π-π interactions inside the particles,” explained Habuchi.

The researchers validated their hypothesis by comprehensive photophysical and structural characterizations. “That was the most exciting moment of our project,” added Habuchi, noting that this demonstration has opened a new door for the correct prediction of the fluorescence properties of Pdots.

“We are now trying to introduce functional groups into these Pdots for bioconjugation,” Habuchi continued. The team is also designing and fabricating near-infrared-emitting nanoparticles.