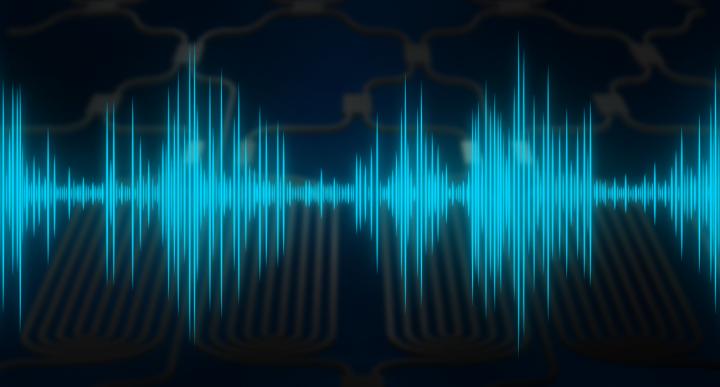 Researchers at the Moscow Institute of Physics and Technology have developed a theory that gives the possibility to precisely predict the level of noise caused by the amplification of photonic and plasmonic signals in nanoscale optoelectronic circuits. In their research published in Physical Review Applied, the scientists propose an approach that can be used to evaluate the ultimate data transfer rates in the emerging optoelectronic microprocessors and discover fundamental limitations on the bandwidth of nanophotonic interfaces.

Surface plasmon polaritons are collective electron oscillations on a metal surface coupled to an electromagnetic field. A surface plasmon could be viewed as a compressed quantum of light, and that explains why plasmonic devices are very promising for many applications: They are almost as compact as nanoelectronic components, but at the same time, they enable up to four orders of magnitude higher data transfer rates than electrical wires. Replacing even some of the electrical interconnects on a chip with plasmonic (nanophotonic) components would give a much-needed boost to microprocessor performance.

The main obstacle currently faced by plasmonics is signal attenuation. Due to high losses, surface plasmons can propagate over long distances only in so-called active plasmonic waveguides. Such waveguides not only guide the plasmonic signal from the transmitter to the receiver but also amplify it using the energy of the electric current flowing through the device. This added energy compensates for signal losses and allows surface plasmons to propagate freely along the waveguide, just like the energy supplied by a battery keeps a quartz clock ticking.

However, there is a fundamental problem associated with signal amplification and loss compensation. Every amplifier does not just increase the amplitude of the input but also adds some unwanted random signals. Physicists refer to these signals as noise. According to the laws of thermodynamics, it is impossible to remove all noise from a system. The distortion of the original signal is largely determined by noise, which fundamentally limits data transfer rates and causes errors in the received bits if information is transferred at higher rates. To increase the data transfer rate, the signal-to-noise ratio needs to be improved. The importance of this ratio is obvious to anyone who has had the experience of talking to someone on a busy street or tuning in on a radio station.

“Noise plays a key role in nearly half of all the devices in our homes: from cell phones and television sets to the fiber-optic channels that are the backbone of the high-speed internet. Signal amplification inevitably decreases the signal-to-noise ratio. In fact, the more gain an amplifier provides, or, in our case, the greater the signal loss it needs to compensate, the higher the level of noise it produces. This problem is especially pronounced in plasmonic waveguides with gain,” explains Dmitry Fedyanin.

A recent study by Dmitry Fedyanin and Andrey Vyshnevyy published in Physical Review Applied deals with a particular kind of noise, namely the photonic noise produced when plasmonic signals are amplified in semiconductor devices. Its main cause is the so-called spontaneous emission. When a photonic signal is amplified, the power of the optical wave increases due to transitions of electrons from higher to lower energy states, namely the difference in energy between the two energy states is released as quanta of light. This emission can be both stimulated and spontaneous. While the stimulated emission amplifies the signal, the spontaneous emission produces random quanta of various energies, i.e., noise with a broad spectrum. Noise can be observed as random fluctuations in signal power, resulting from the interference of frequency components of the signal and of the spontaneous emission (this phenomenon is known as beat). Any increase in the gain provided by an amplifier increases the noise level and broadens the spectra of emission, both stimulated and spontaneous. The applicability of the well-established approaches of quantum optics, which are meant to describe the interaction of light with individual atoms, decreases as the spectra in the studied system become broader. To tackle the case of high-gain amplification at the nanoscale, the researchers basically had to start the work from scratch.

“We had to bridge the gap between three different areas in physics that rarely intersect with one another: quantum optics, semiconductor physics, and optoelectronics. We have developed a theoretical framework that can be used to describe photonic noise in structures incorporating active media with a broad gain spectrum. Although this approach was initially conceived for plasmonic waveguides with gain, it can be applied with no change to all optical amplifiers and similar systems,” Dmitry Fedyanin points out.

“If we know the noise power in a nanophotonic communication channel, as well as its spectral characteristics, it is possible to evaluate the maximum rate of data transfer along that channel. Furthermore, we can identify ways to reduce the amount of noise by choosing certain regimes of device operation and using optical and electrical filtering techniques,” adds Andrey Vyshnevyy.

The proposed theory sheds light on the prospects of a new class of devices which combine the advantages of electronics and photonics on the same chip. In a chip of that kind, plasmonic components would be used for ultrafast communication between processor cores and registers. Although signal attenuation was previously regarded as the proposed chip’s main drawback, the recent study by Russian researchers shows that as soon as the loss of signal has been compensated, a way must be found to deal with the issue of noise. Otherwise, the signal might simply get drowned out by spontaneous emission noise, making the chip virtually useless.

The calculations performed by the researchers demonstrate that an active plasmonic waveguide with a cross section of just 200?×?200 nanometers could be used to transmit signals over a distance of 5 millimeters. This may not seem like much in terms of the distances we deal with in everyday life, but this number is actually rather typical for modern-day microprocessors. As for the data transfer rates, they would exceed 10 Gbit/s per spectral channel, i.e., a data communication channel, which uses a specific wavelength of light. Not to mention that a single nanoscale waveguide can be simultaneously used by several dozen of these spectral channels if the wavelength-division multiplexing (WDM) technology is used, which is a standard in all optical communication lines including broadband internet. To put that in perspective, the maximum rate of data transfer through an electrical interconnect (a copper conductor) of similar dimensions is only 20 Mbit/s, which is at least 500 times slower!

The scientists found how the noise power and noise characteristics depend on the parameters of plasmonic waveguides with gain and showed how the level of noise can be reduced to ensure the maximum bandwidth of the nanophotonic interface. They proved that it is possible to combine a miniature size and a low error count with a high data transfer rate and a relatively high energy efficiency in a single device, heralding a “plasmonic breakthrough” in microelectronics that could come in the next ten years.