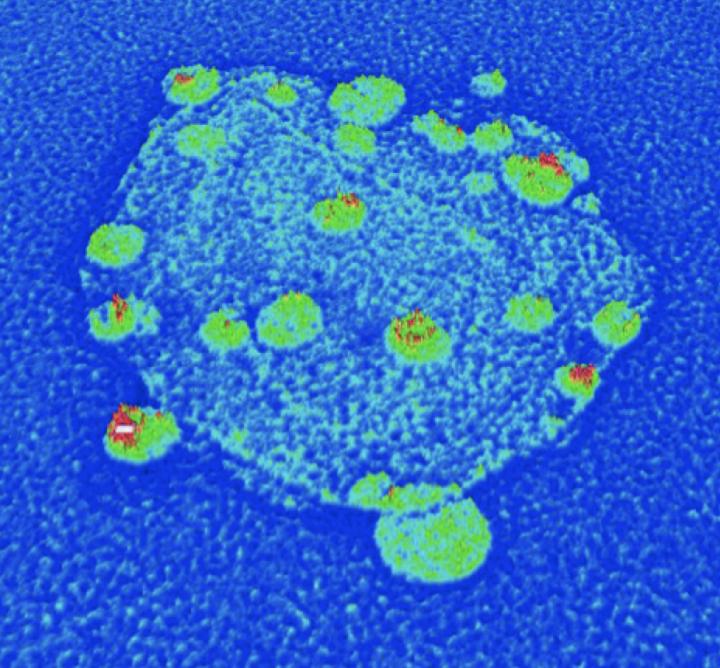 Nanomaterials have the potential to improve many next-generation technologies. They promise to speed up computer chips, increase the resolution of medical imaging devices and make electronics more energy efficient. But imbuing nanomaterials with the right properties can be time consuming and costly. A new, quick and inexpensive method for constructing diamond-based hybrid nanomaterials could soon launch the field forward.

University of Maryland researchers developed a method to build diamond-based hybrid nanoparticles in large quantities from the ground up, thereby circumventing many of the problems with current methods. The technique is described in the June 8, 2016 issue of the journal Nature Communications.

The process begins with tiny, nanoscale diamonds that contain a specific type of impurity: a single nitrogen atom where a carbon atom should be, with an empty space right next to it, resulting from a second missing carbon atom. This “nitrogen vacancy” impurity gives each diamond special optical and electromagnetic properties.

By attaching other materials to the diamond grains, such as metal particles or semiconducting materials known as “quantum dots,” the researchers can create a variety of customizable hybrid nanoparticles, including nanoscale semiconductors and magnets with precisely tailored properties.

“If you pair one of these diamonds with silver or gold nanoparticles, the metal can enhance the nanodiamond’s optical properties. If you couple the nanodiamond to a semiconducting quantum dot, the hybrid particle can transfer energy more efficiently,” said Min Ouyang, an associate professor of physics at UMD and senior author on the study.

Evidence also suggests that a single nitrogen vacancy exhibits quantum physical properties and could behave as a quantum bit, or qubit, at room temperature, according to Ouyang. Qubits are the functional units of as-yet-elusive quantum computing technology, which may one day revolutionize the way humans store and process information. Nearly all qubits studied to date require ultra-cold temperatures to function properly.

A qubit that works at room temperature would represent a significant step forward, facilitating the integration of quantum circuits into industrial, commercial and consumer-level electronics. The new diamond-hybrid nanomaterials described in Nature Communications hold significant promise for enhancing the performance of nitrogen vacancies when used as qubits, Ouyang noted.

While such applications hold promise for the future, Ouyang and colleagues’ main breakthrough is their method for constructing the hybrid nanoparticles. Although other researchers have paired nanodiamonds with complementary nanoparticles, such efforts relied on relatively imprecise methods, such as manually installing the diamonds and particles next to each other onto a larger surface one by one. These methods are costly, time consuming and introduce a host of complications, the researchers say.

“Our key innovation is that we can now reliably and efficiently produce these freestanding hybrid particles in large numbers,” explained Ouyang, who also has appointments in the UMD Center for Nanophysics and Advanced Materials and the Maryland NanoCenter, with an affiliate professorship in the UMD Department of Materials Science and Engineering.

The method developed by Ouyang and his colleagues, UMD physics research associate Jianxiao Gong and physics graduate student Nathaniel Steinsultz, also enables precise control of the particles’ properties, such as the composition and total number of non-diamond particles. The hybrid nanoparticles could speed the design of room-temperature qubits for quantum computers, brighter dyes for biomedical imaging, and highly sensitive magnetic and temperature sensors, to name a few examples.

“Hybrid materials often have unique properties that arise from interactions between the different components of the hybrid. This is particularly true in nanostructured materials where strong quantum mechanical interactions can occur,” said Matthew Doty, an associate professor of materials science and engineering at the University of Delaware who was not involved with the study. “The UMD team’s new method creates a unique opportunity for bulk production of tailored hybrid materials. I expect that this advance will enable a number of new approaches for sensing and diagnostic technologies.”

The special properties of the nanodiamonds are determined by their nitrogen-vacancies, which cause defects in the diamond’s crystal structure. Pure diamonds consist of an orderly lattice of carbon atoms and are completely transparent. However, pure diamonds are quite rare in natural diamond deposits; most have defects resulting from non-carbon impurities such as nitrogen, boron and phosphorus. Such defects create the subtle and desirable color variations seen in gemstone diamonds.

The nanoscale diamonds used in the study were created artificially, and have at least one nitrogen vacancy. This impurity results in an altered bond structure in the otherwise orderly carbon lattice. The altered bond is the source of the optical, electromagnetic and quantum physical properties that make the diamonds useful when paired with other nanomaterials.

Although the current study describes diamonds with nitrogen substitutions, Ouyang points out that the technique can be extended to other diamond impurities as well, each of which could open up new possibilities.

“A major strength of our technique is that it is broadly useful and can be applied to a variety of diamond types and paired with a variety of other nanomaterials,” Ouyang explained. “It can also be scaled up fairly easily. We are interested in studying the basic physics further, but also moving toward specific applications. The potential for room-temperature quantum entanglement is particularly exciting and important.”