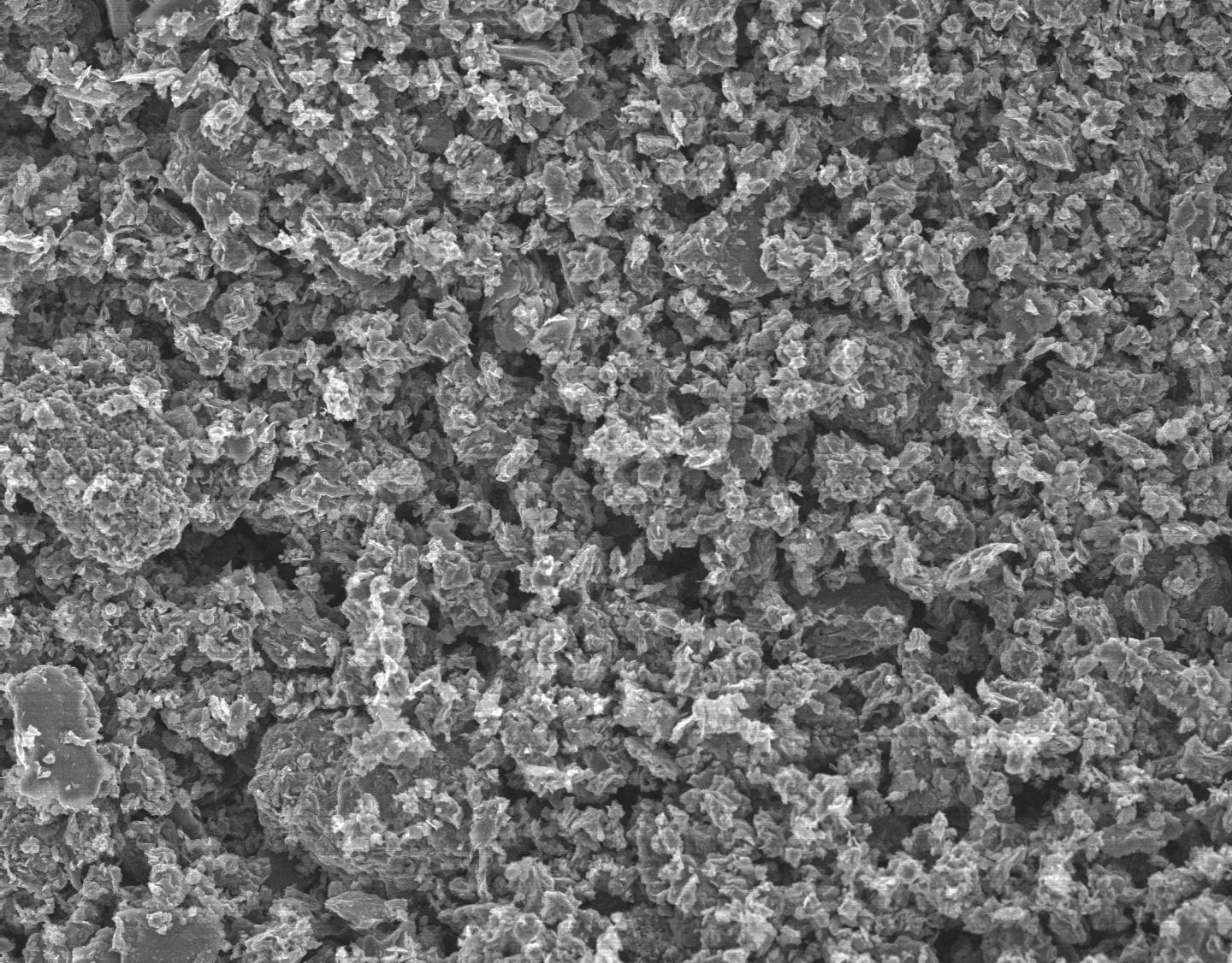 C-seal F, a carbon source, magnified 200 times reveals its high surface area of 12.5 square meters per grams. Processing it into oxidatively modified carbon raises its surface area to 16.9 square meters per gram while enhancing its ability to remove radioactive cesium and strontium from water, according to researchers at Rice University and Kazan Federal University. Source: Kazan Federal University

Researchers at Rice University and Kazan Federal University in Russia have found a way to extract radioactivity from water and said their discovery could help purify the hundreds of millions of gallons of contaminated water stored after the Fukushima nuclear plant accident.

They reported that their oxidatively modified carbon (OMC) material is inexpensive and highly efficient at absorbing radioactive metal cations, including cesium and strontium, toxic elements released into the environment when the Fukushima plant melted down after an earthquake and tsunami in March 2011.

OMC can easily trap common radioactive elements found in water floods from oil extraction, such as uranium, thorium and radium, said Rice chemist James Tour, who led the project with Ayrat Dimiev, a former postdoctoral researcher in his lab and now a research professor at Kazan Federal University.

The material makes good use of the porous nature of two specific sources of carbon, Tour said. One is an inexpensive, coke-derived powder known as C-seal F, used by the oil industry as an additive to drilling fluids. The other is a naturally occurring, carbon-heavy mineral called shungite found mainly in Russia.

The results appear this month in Carbon.

Tour and researchers at Lomonosov Moscow State University had already demonstrated a method to remove radionuclides from water using graphene oxide as a sorbent, as reported in Solvent Extraction and Ion Exchange late last year, but the new research suggests OMC is easier and far less expensive to process.

Treating the carbon particles with oxidizing chemicals increased their surface areas and “decorated” them with the oxygen molecules needed to adsorb the toxic metals. The particles were between 10 and 80 microns wide.

While graphene oxide excelled at removing strontium, Tour said, the two types of OMC were better at extracting cesium, which he said has been the hardest element to remove from water stored at Fukushima. The OMC was also much easier and less expensive to synthesize and to use in a standard filtration system, he said.

“We know we can use graphene oxide to trap the light radioactive elements of relevance to the Fukushima cleanup, namely cesium and strontium,” Tour said. “But in the second study, we learned we can move from graphene oxide, which remains more expensive and harder to make, to really cheap oxidized coke and related carbons to trap these elements.”

While other materials used for remediation of radioactive waste need to be stored with the waste they capture, carbon presents a distinct advantage, he said. “Carbon that has captured the elements can be burned in a nuclear incinerator, leaving only a very small amount of radioactive ash that’s much easier to store,” Tour said.

“Just passing contaminated water through OMC filters will extract the radioactive elements and permit safe discharge to the ocean,” he said. “This could be a major advance for the cleanup effort at Fukushima.”

The two flavors of OMC particles – one from coke-derived carbon and the other from shungite — look like balls of crumpled paper, or roses with highly irregular petals. The researchers tested them by mixing the sorbents with contaminated water as well as through column filtration, a standard process in which fluid is pumped or pulled by gravity through a filter to remove contaminants.

In the mixing test, the labs dispersed nonradioactive isotopes of strontium and cesium in spring water, added OMC and stirred for two hours. After filtering out the sorbent, they measured the particles left in the water.

OMC1 (from coke) proved best at removing both cesium and strontium from contaminated water, getting significantly better as the sorbent was increased. A maximum 800 milligrams of OMC1 removed about 83 percent of cesium and 68 percent of strontium from 100 milliliters of water, they reported.

OMC2 (from shungite) in the same concentrations adsorbed 70 percent of cesium and 47 percent of strontium.

The researchers were surprised to see that plain shungite particles extracted almost as much cesium as its oxidized counterpart. “Interestingly, plain shungite was used by local people for water purification from ancient times,” Dimiev said. “But we have increased its efficiency many times, as well as revealed the factors behind its effectiveness.”

In column filtration tests, which involved flowing 1,400 milliliters of contaminated water through an OMC filter in 100-milliliter amounts, the filter removed nearly 93 percent of cesium and 92 percent of strontium in a single pass. The researchers were able to contain and isolate contaminants trapped in the filter material.