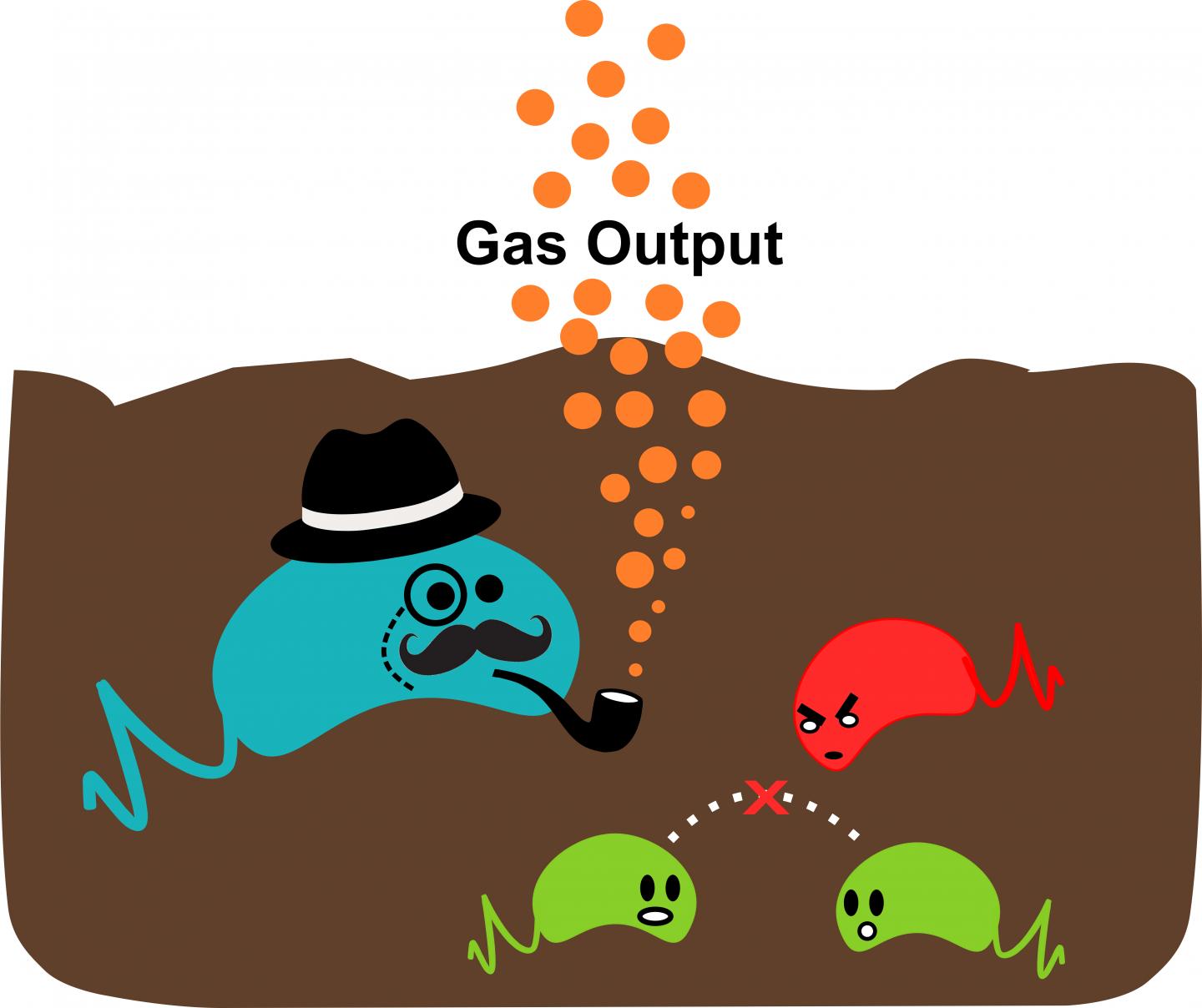 A robust two-stage microbial sensor developed at Rice University will help researchers observe gene expression and the bioavailability of nutrients in environments like soil and sediments without disturbing them. Rather than fluoresce, like current biosensors, these release gas to report on their host microbes’ presence and activity. Credit: Illustration by Ilenne Del Valle/Rice University

A gene “genie” developed by Rice University scientists grants researchers valuable data about microbes through puffs of gas from the soil. The latest version is a robust two-stage microbial sensor that will help bioengineers, geobiologists and other researchers observe gene expression and the bioavailability of nutrients in laboratory facsimiles of environments like soil and sediments without disturbing them.

The gas is produced by microbes genetically engineered to report on both their environment and activity and mixed into soil samples in contained laboratory experiments. One gas that seeps out tells researchers how many of the target microbes are present and a second gas tells researchers what the microbes are doing. Eventually, the Rice team would like the programmed microbes to reveal whether and how they communicate with each other.

The ongoing research began in 2015 with a $1 million grant by the W.M. Keck Foundation and is led by Rice synthetic biologist Jonathan Silberg, biogeochemist Caroline Masiello and graduate student and lead author Hsiao-Ying (Shelly) Cheng. Their goal has been to measure bioactivity in opaque environments, especially those where changing the environment would alter the results.

Silberg said the new gas-emitting microbes operate on the same principle as those that contain two fluorescent proteins; for example, a green-fluorescing protein would tag all the cells in a dish and a red one would light up when triggered by a microbial activity, like protein expression or proximity of a specific molecule.

“In those systems, you can check the ratio of green to red and know, on average, what the cells are doing,” he said. “But that doesn’t work in soils.”

Currently, researchers measure microbial activity in soil by grinding samples and using processes like high-performance liquid chromatography to quantify their contents. That not only eliminates the opportunity to study the same sample over time, it also limits the scope of the data.

“Our system answers the right question,” Masiello said. “Do microbes know these compounds are present, and what are they doing in response to them?”

In the Rice lab’s ratio-metric system, gases that emerge from modified E. coli or other microbes could help scientists measure soil development. Ratio-metric means the output of gas is directly proportional to the input, in this case the level of activity the microbe senses.

In one test, E. coli was modified to express enzymes that synthesize ethylene and bromomethane. The bacterium continuously made ethylene, which allowed the researchers to monitor the size of the microbe population, but only made bromomethane when triggered by, in this case, the bioavailability of acylhomoserine lactones (AHL), molecules that facilitate signaling between bacteria.

Tests with another bacteria, Shewanella, whose native habitat is a sediment, showed similarly robust results. “The dynamic range for sensing chemicals with what Shelly’s built is very good,” Silberg said. “It will vary with the organism, but synthetic biology is really about tuning all of that.”

“The particularly useful aspect of this work is the potential to distinguish between what’s chemically extractable in a marine or soil environment and what a microbe perceives is there,” Masiello said. “Just because we can grind up a soil and measure something doesn’t mean that plants or microbes know what’s there. These tools are what we need to be able to, for the first time, measure microbial perception of their environment.”

The modified microbes are meant to be used for lab testing and not in the wild. But tests would be much faster than current processes and allow labs to monitor a sample continuously over time. The researchers anticipate applications not only in synthetic biology and environmental science but also for tracking the environmental fate of gut bacteria being developed for diagnostics and therapeutics.

Going forward, the Rice lab intends to focus its effort on the conditional output part of the sensor. “As we’ve been building this, people like (Rice bioscientist) Jeff Tabor and others are standardizing the sensing modules,” Silberg said. “We’re building new output modules that you could then couple to the great diversity of sensors they are building.

“Shelly’s really led the way to prove that we can do gas reporting, and she was the first to do it in soils,” he said. “She then showed we could do it with horizontal gene transfer as part of our proof of concept, and now this. The tools are just getting there, and I think applications will be next.”