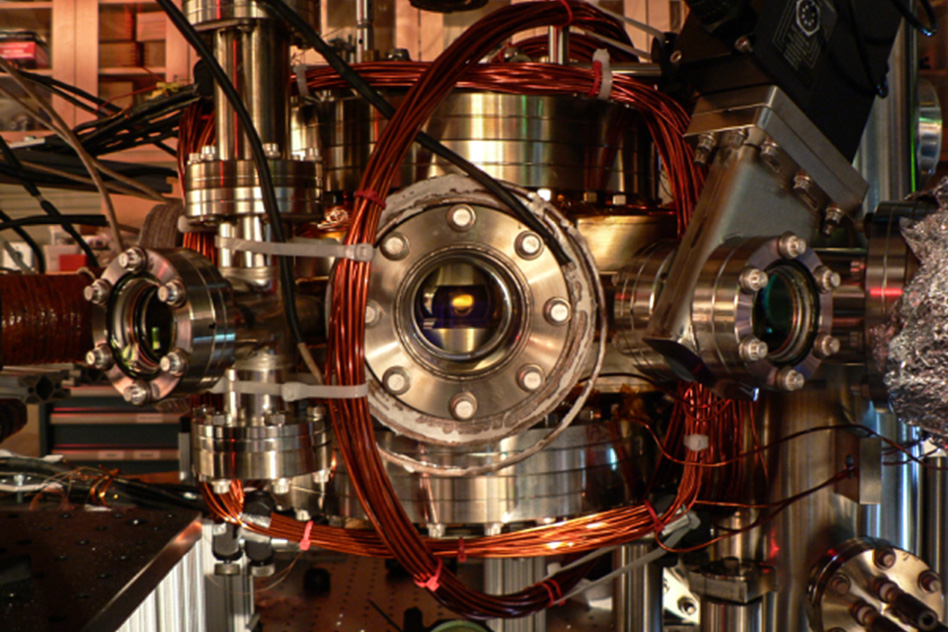 This vacuum chamber with apertures for several laser beams was used to cool molecules of sodium-potassium down to temperatures of a few hundred nanoKelvins, or billionths of a degree above absolute zero. Such molecules could be used as a new kind of qubit, a building block for eventual quantum computers. Courtesy of the researchers

Researchers have taken an important step toward the long-sought goal of a quantum computer, which in theory should be capable of vastly faster computations than conventional computers, for certain kinds of problems. The new work shows that collections of ultracold molecules can retain the information stored in them, for hundreds of times longer than researchers have previously achieved in these materials.

These two-atom molecules are made of sodium and potassium and were cooled to temperatures just a few ten-millionths of a degree above absolute zero (measured in hundreds of nanokelvins, or nK). The results are described in a report this week in Science, by Martin Zwierlein, an MIT professor of physics and a principal investigator in MIT’s Research Laboratory of Electronics; Jee Woo Park, a former MIT graduate student; Sebastian Will, a former research scientist at MIT and now an assistant professor at Columbia University, and two others, all at the MIT-Harvard Center for Ultracold Atoms.

Many different approaches are being studied as possible ways of creating qubits, the basic building blocks of long-theorized but not yet fully realized quantum computers. Researchers have tried using superconducting materials, ions held in ion traps, or individual neutral atoms, as well as molecules of varying complexity. The new approach uses a cluster of very simple molecules made of just two atoms.

“The most amazing thing is that [these] molecules are a system which may allow realizing both storage and processing of quantum information, using the very same physical system,” Will says. “That is actually a pretty rare feature that is not typical at all among the qubit systems that are mostly considered today.”

In the team’s initial proof-of-principle lab tests, a few thousand of the simple molecules were contained in a microscopic puff of gas, trapped at the intersection of two laser beams and cooled to ultracold temperatures of about 300 nanokelvins. “The more atoms you have in a molecule the harder it gets to cool them,” Zwierlein says, so they chose this simple two-atom structure.

“We have been able to trap molecules for a long time, and also demonstrate that they can carry quantum information and hold onto it for a long time,” Zwierlein says. And that, he says, is “one of the key breakthroughs or milestones one has to have before hoping to build a quantum computer, which is a much more complicated endeavor.”

The use of sodium-potassium molecules provides a number of advantages, Zwierlein says. For one thing, “the molecule is chemically stable, so if one of these molecules meets another one they don’t break apart.”

In the context of quantum computing, the “long time” Zwierlein refers to is one second — which is “in fact on the order of a thousand times longer than a comparable experiment that has been done” using rotation to encode the qubit, he says. “Without additional measures, that experiment gave a millisecond, but this was great already.” With this team’s method, the system’s inherent stability means “you get a full second for free.”

That suggests, though it remains to be proven, that such a system would be able to carry out thousands of quantum computations, known as gates, in sequence within that second of coherence. The final results could then be “read” optically through a microscope, revealing the final state of the molecules.

“We have strong hopes that we can do one so-called gate — that’s an operation between two of these qubits, like addition, subtraction, or that sort of equivalent — in a fraction of a millisecond,” Zwierlein says. “If you look at the ratio, you could hope to do 10,000 to 100,000 gate operations in the time that we have the coherence in the sample. That has been stated as one of the requirements for a quantum computer, to have that sort of ratio of gate operations to coherence times.”

“The next great goal will be to ‘talk’ to individual molecules. Then we are really talking quantum information,” Will says. “If we can trap one molecule, we can trap two. And then we can think about implementing a ‘quantum gate operation’ — an elementary calculation — between two molecular qubits that sit next to each other,” he says.

Using an array of perhaps 1,000 such molecules, Zwierlein says, would make it possible to carry out calculations so complex that no existing computer could even begin to check the possibilities. Though he stresses that this is still an early step and that such computers could be a decade or more away, in principle such a device could quickly solve currently intractable problems such as factoring very large numbers — a process whose difficulty forms the basis of today’s best encryption systems for financial transactions.

Besides quantum computing, the new system also offers the potential for a new way of carrying out precision measurements and quantum chemistry, Zwierlein says.

“These results are truly state of the art,” says Simon Cornish, a professor of physics at Durham University in the U.K., who was not involved in this work. The findings “beautifully reveal the potential of exploiting nuclear spin states in ultracold molecules for applications in quantum information processing, as quantum memories and as a means to probe dipolar interactions and ultracold collisions in polar molecules,” he says. “I think the results constitute a major step forward in the field of ultracold molecules and will be of broad interest to the large community of researchers exploring related aspects of quantum science, coherence, quantum information, and quantum simulation.”