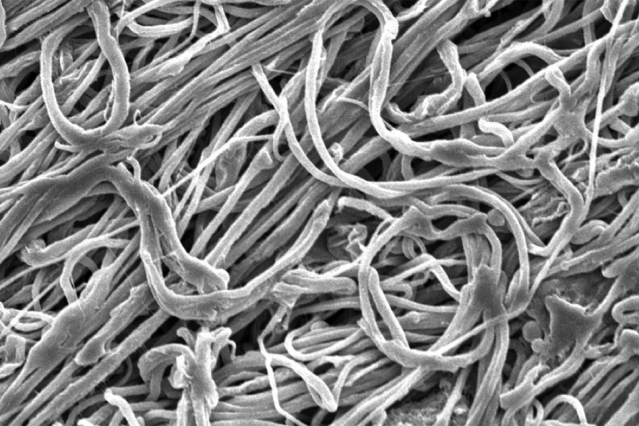 New ultra-fine fibers created by the MIT team are seen in a Scanning Electron Microscope (SEM) image. Courtesy of the researchers.

Researchers at MIT have developed a process that can produce ultrafine fibers — whose diameter is measured in nanometers, or billionths of a meter — that are exceptionally strong and tough. These fibers, which should be inexpensive and easy to produce, could be choice materials for many applications, such as protective armor and nanocomposites.

The new process, called gel electrospinning, is described in a paper by MIT professor of chemical engineering Gregory Rutledge and postdoc Jay Park. The paper appears online and will be published in the February edition of the Journal of Materials Science.

In materials science, Rutledge explains, “there are a lot of tradeoffs.” Typically researchers can enhance one characteristic of a material but will see a decline in a different characteristic. “Strength and toughness are a pair like that: Usually when you get high strength, you lose something in the toughness,” he says. “The material becomes more brittle and therefore doesn’t have the mechanism for absorbing energy, and it tends to break.” But in the fibers made by the new process, many of those tradeoffs are eliminated.

“It’s a big deal when you get a material that has very high strength and high toughness,” Rutledge says. That’s the case with this process, which uses a variation of a traditional method called gel spinning but adds electrical forces. The results are ultrafine fibers of polyethylene that match or exceed the properties of some of the strongest fiber materials, such as Kevlar and Dyneema, which are used for applications including bullet-stopping body armor.

“We started off with a mission to make fibers in a different size range, namely below 1 micron [millionth of a meter], because those have a variety of interesting features in their own right,” Rutledge says. “And we’ve looked at such ultrafine fibers, sometimes called nanofibers, for many years. But there was nothing in what would be called the high-performance fiber range.” High-performance fibers, which include aramids such as Kevlar, and gel spun polyethylenes like Dyneema and Spectra, are also used in ropes for extreme uses, and as reinforcing fibers in some high-performance composites.

“There hasn’t been a whole lot new happening in that field in many years, because they have very top-performing fibers in that mechanical space,” Rutledge says. But this new material, he says, exceeds all the others. “What really sets those apart is what we call specific modulus and specific strength, which means that on a per-weight basis they outperform just about everything.” Modulus refers to how stiff a fiber is, or how much it resists being stretched.

Compared to carbon fibers and ceramic fibers, which are widely used in composite materials, the new gel-electrospun polyethylene fibers have similar degrees of strength but are much tougher and have lower density. That means that, pound for pound, they outperform the standard materials by a wide margin, Rutledge says.

In creating this ultrafine material, the team had aimed just to match the properties of existing microfibers, “so demonstrating that would have been a nice accomplishment for us,” Rutledge says. In fact, the material turned out to be better in significant ways. While the test materials had a modulus not quite as good as the best existing fibers, they were quite close — enough to be “competitive,” he says. Crucially, he adds, “the strengths are about a factor of two better than the commercial materials and comparable to the best available academic materials. And their toughness is about an order of magnitude better.”

The researchers are still investigating what accounts for this impressive performance. “It seems to be something that we received as a gift, with the reduction in fiber size, that we were not expecting,” Rutledge says.

He explains that “most plastics are tough, but they’re not as stiff and strong as what we’re getting.” And glass fibers are stiff but not very strong, while steel wire is strong but not very stiff. The new gel-electrospun fibers seem to combine the desirable qualities of strength, stiffness, and toughness in ways that have few equals.

Using the gel electrospinning process “is essentially very similar to the conventional [gel spinning] process in terms of the materials we’re bringing in, but because we’re using electrical forces” and using a single-stage process rather than the multiple stages of the conventional process, “we are getting much more highly drawn fibers,” with diameters of a few hundred nanometers rather than the typical 15 micrometers, he says. The researchers’ process combines the use of a polymer gel as the starting material, as in gel spun fibers, but uses electrical forces rather than mechanical pulling to draw the fibers out; the charged fibers induce a “whipping” instability process that produces their ultrafine dimensions. And those narrow dimensions, it turns out, led to the unique properties of the fibers.

These results might lead to protective materials that are as strong as existing ones but less bulky, making them more practical. And, Rutledge adds, “they may have applications we haven’t thought about yet, because we’ve just now learned that they have this level of toughness.”

The research was supported by the U.S. Army through the Natick Soldier Research, Development and Engineering Center, and the Institute for Soldier Nanotechnologies, and by the National Science Foundation’s Center for Materials Science and Engineering.