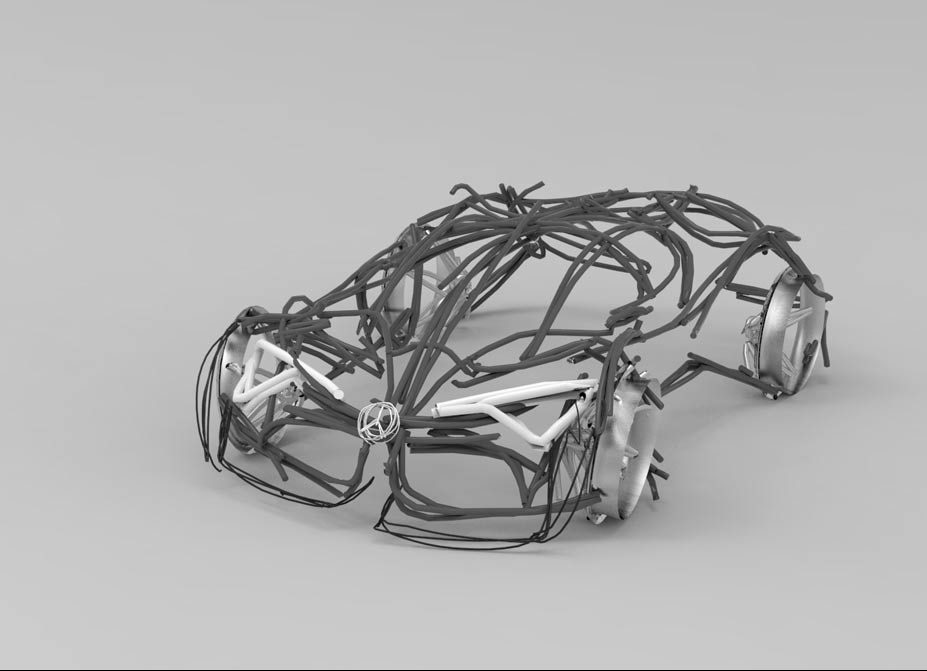 For an automobile designer, one of the most challenging and time-consuming aspects of creating a new vehicle is having to sketch in 2D sketch while thinking in 3D.

Gravity Sketch, a UK-based virtual reality (VR) software firm, is working to provide car companies, including Ford Motor Company, with VR tools that will allow designers to not only sketch in 3D but also immerse themselves inside of their sketches, streamlining the design process.

Oluwaseyi Sosanya, the co-founder of Gravity Sketch, explained in an exclusive interview with R&D Magazine how VR can be used to revolutionize the design process for automotive designers.

“The designer, who is already thinking in 3D, forces himself into a 2D setting and from there he has to pass those 2D sketches to a CAD [computer-aided design] person, who has to interpret the 2D sketch into 3D in the computer,” Sosanya said. “What we’ve done is we made that process a lot faster by giving the designer 3D tools to imagine his 3D idea. We focused on the design process because a lot of things can crop up, a lot of nuances that you want to build into a 3D tool.”

For carmakers, the process of designing a vehicle traditionally begins with a 2D sketch that is scanned to produce a high-quality illustration. The renderings must then be evaluated, with only a few translating into data using CAD software to create a 3D model that is then transferred into a VR environment to determine the design’s feasibility.

However, Gravity Sketch has streamlined this lengthy process from a few weeks to about eight hours by foregoing the initial 2D stage, allowing the designer to jump right into working with the 3D model. The technology allows them to anchor a driver at the center of the 3D model and rotate the design to view from any angle.

The designer can even step inside of the vehicle sketch to adjust certain design aspects.

“It’s essentially 3D design software…however, you are focusing on a brand new interface, so essentially we tried to mimic real world actions, so instead of organizing our tools by dropdown menu, we try to mimic how you would organize your utensils in the kitchen for example,” Sosanya said.

“Because you are using virtual reality, you are in a 3D environment with a 3D interface,” he added. “So the real value here is we create this kind of ease and frictionless workflow that essentially makes the tool become invisible.”

Sosanya also said that there is not a lot of training necessary and most designers pick up the VR system after four to eight hours of training.

“People that think in 3D and are used to 3D and have the 3D fundamentals really solid, we designed our tool in such a way where you can pick it up and start using it immediately,” he said.

Sosanya said Gravity Sketch has been working for at least the last year with Ford in developing a VR platform based on their needs.

He also explained that as a company, Gravity Sketch works with each individual client to tailor a software platform to meet their individual needs.

“When it comes to creating relationships with enterprises and companies like Ford, we don’t go out with our current solutions and say ‘hey this is our software, this is how you use it’,” Sosanya said. “We are actually a lot more inquisitive about their workflow and we have the luxury to do that as a small company. So we spend a lot of time with them, understanding first how they are designing, what things are working, what things aren’t working in their current workflow and what are they looking to achieve, what kind of problems they are trying to solve.

Along with designing vehicles, the virtual reality system can be used to design a number of other things. For example, Sosanya said an architect can use the tools to sketch their early stage ideas and then immerse themselves inside of the sketched out drawing in a virtual 3D room or building. It can also be used for entertainers to sketch out larger characters, like a 30-foot cartoon monster, and for sports apparel companies to sketch out new footwear.

Next, Gravity Sketch plans to continue to improve their tools to allow more presentation features, as well as implement the ability to connect multiple designers, project managers and engineers to work within the same sketches.