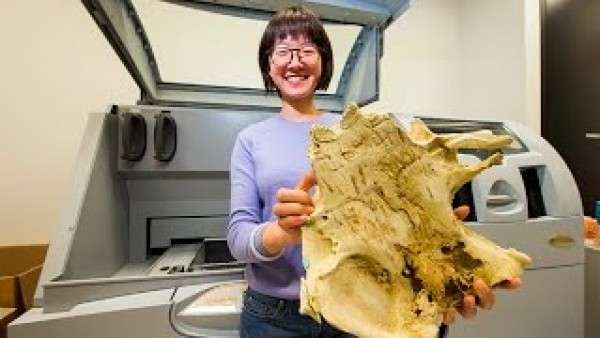 ANU PhD student Yuzhi Hu with a 3D print of the 400 million year old fish fossil that is six times the size of the specimen. (Credit: Australian National University)

Three-dimensional prints of a 400 million year old fish fossil from around Lake Burrinjuck in southeast Australia reveal the possible evolutionary origins of human teeth, according to new research by The Australian National University (ANU) and Queensland Museum.

ANU and Queensland Museum digitally dissected the jaws of a fossil Buchanosteus – an armoured fish from the extinct placoderm group – and used the 3D prints to learn how the jaws moved and whether the fish had teeth.

Gavin Young, Ph.D., one of the ANU researchers, said the study helped determine when and how teeth – a characteristic feature of all animal species with jaws, including humans – had originated in evolutionary history.

“We have used CT scanning facilities at ANU to investigate the internal structure of very fragile fossil skulls and braincases that have been acid-etched from limestone rock,” said Young, a palaeontologist at the ANU Department of Applied Mathematics.

“We are conducting further research on the internal tissue structure of tooth-like denticles in the mouth of the fish fossil, to determine whether they represent a transitional stage in the evolution of teeth.”

Co-researcher Ms Yuzhi Hu from the ANU Research School of Earth Sciences said the evolutionary origin of teeth was a major scientific question.

The ANU researchers and Dr Carole Burrow from Queensland Museum published the research results in Biology Letters, disputing findings in an article the journal published last year suggesting that the extinct placoderms had real teeth.

“It’s great that we are able to use recent technology, such as micro-CT scanning and 3-D printing, to examine some of the earliest known evidence of tooth-like structures in the most primitive jawed fishes,” Dr Burrow said.

“Placoderms have been a common focus in the question of tooth origins. Our team has been able to examine the gnathal plates of placoderms from the Early Devonian period, and compare their internal and external structure with those of younger placoderms as well as with the true teeth in other jawed fishes.”