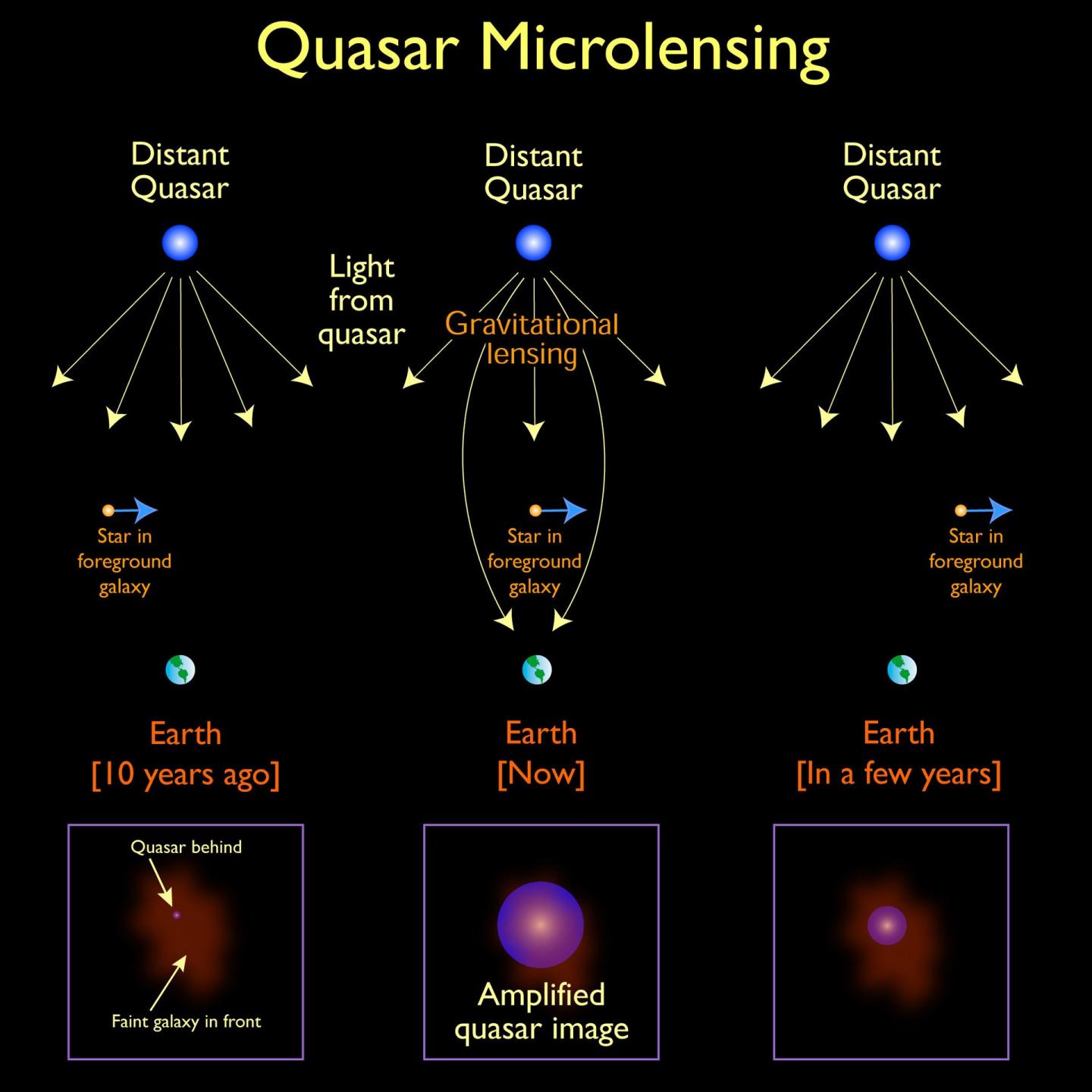 The microlensing object in the foreground galaxy could be a star (as depicted), a primordial black hole, or any other compact object. Source: NASA/Jason Cowan (Astronomy Technology Center).

The nature of the dark matter which apparently makes up 80% of the mass of the particles in the universe is still one of the great unsolved mysteries of present day sciences. The lack of experimental evidence, which could allow us to identify it with one or other of the new elementary particles predicted by the theorists, as well as the recent discovery of gravitational waves coming from the merging of two black holes (with masses some 30 times that of the Sun) by LIGO the Laser Interferometer Gravitational Wave Observatory) have revived interest in the possibility that dark matter might take the form of primordial black holes with masses between 10 and 1000 times that of the Sun.

Primordial black holes, which would have originated in high density fluctuations of matter during the first moments of the Universe, are in principle very interesting. As opposed to those which form from stars, whose abundance and masses are limited by models of stellar formation and evolution, primordial black holes could exist with a wide range of masses and abundances. They would be found in the halos of galaxies, and the occasional meeting between two of them having masses 30 times that of the Sun, followed by a subsequent merger, might have given rise to the gravitational waves detected by LIGO.

If there were an appreciable number of black holes in the halos of galaxies, some of them intercept the light coming towards us from a distant quasar. Because of their strong gravitational fields, their gravity could concentrate the rays of light, and cause an increase in the apparent brightness of the quasar. This effect, known as “gravitational microlensing” is bigger the bigger the mass of the black hole, and the probability of detecting it would be bigger the more the presence of these black holes. So although the black holes themselves cannot be directly detected, they would be detected by increases in the brightness of observed quasars.

On this assumption, a group of scientists has used the microlensing effect on quasars to estimate the numbers of primordial black holes of intermediate mass in galaxies. The study, led by the researcher at the Instituto de Astrofísica de Canarias (IAC) and the University of La Laguna (ULL), Evencio Mediavilla Gradolph, shows that normal stars like the Sun cause the microlensing effects, thus ruling out the existence of a large population of primordial black holes with intermediate mass.

Using computer simulations, they have compared the rise in brightness, in visible light and in X-rays, of 24 distant quasars with the values predicted by the microlensing effect. They have found that the strength of the effect is relatively low, as would be expected from objects with a mass between 0.05 and 0.45 times that of the Sun, and well below that of intermediate mass black holes. In addition they have estimated that these microlenses form roughly 20% of the total mass of a galaxy, equivalent to the mass expected to be found in stars. So their results show that, with high probability, it is normal stars and not primordial intermediate mass black holes which are responsible for the observed microlensing.

“This study implies “says Evencio Mediavilla, “that it is not at all probable that black holes with masses between 10 and 100 times the mass of the Sun make up a significant fraction of the dark matter”. For that reason the black holes whose merging was detected by LIGO were probably formed by the collapse of stars, and were not primordial black holes”.

Astronomers participating in this research include Jorge Jiménez-Vicente and José Calderón-Infante (University of Granada) and José A. Muñoz Lozano, and Héctor Vives-Arias, (University of Valencia).