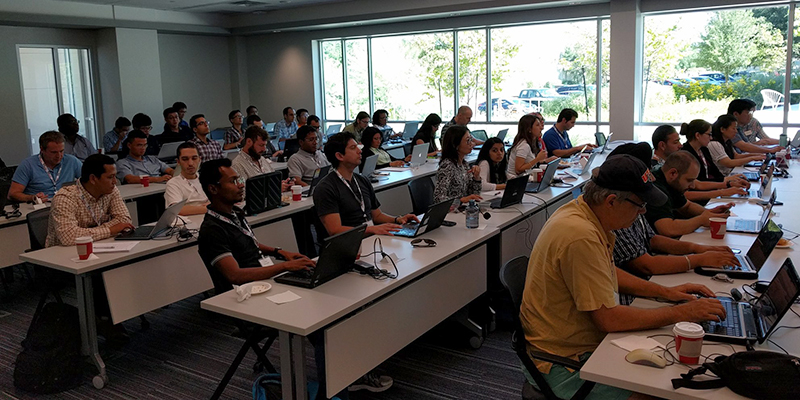 Students participating in the Designing and Administering Large-Scale Systems Institute in April 2017.

The Texas Advanced Computing Center (TACC) has a long, rich history of providing training in advanced computing to researchers and students on and off The University of Texas at Austin (UT Austin) campus. From the beginning, TACC has taught the basics of high performance computing (HPC) and scientific visualization. One of the center’s goals has always been to inspire and educate the next generation of computational scientists and technologists, and that mission has taken a leap forward with the re-designed TACC Institutes, launched this spring.

The TACC Institutes have their genesis in the Summer Supercomputing Institute first offered in 2007, which brought scientists and engineers from academia and industry to TACC to experience the training the center provided during the regular semester. The training was packaged into a one-week program so people could travel to Austin to study advanced computing.

“For the first nine years, we only had one training room and could support 35 to 40 people on a system at any given time,” said Lucas Wilson, director of Training and Professional Development in TACC’s User Services group. “We had enough staff to be able to do hands-on exercises in a way that was useful to attendees. It gave them a reason to fly to Austin, spend a week with us, and talk to us about their specific research problems.”

In 2016, the Summer Supercomputing Institute at TACC expanded to two tracks.

“For our 10th and final Summer Supercomputing Institute last year, we had two tracks — HPC and Visualization and Data Analysis. “We did this because the user community shifted,” Wilson said. “We don’t have just the traditional HPC users any longer. We have a lot of people who do high-throughput and data analysis jobs. They’re not using just OpenMP or MPI. They’re not writing code in just C++ or Fortran. They’re using Python, R, Hadoop, Spark, and a lot of other tools for data processing. They have an enormous amount of data to ingest. We added a track to teach those skills.”

The last Summer Supercomputing Institute attracted even more participants with diverse interests. TACC realized it would make more sense to highlight many different aspects of advanced computing, not just HPC and scientific visualization.

“We’ve expanded to include experts in Life Sciences and Machine Learning. And we have some of the most experienced large-scale systems administrators in academia,” Wilson said. “There’s a lot of talent, experience and knowledge in all areas of the center that we want to share with people.”

Advanced computing doesn’t just cater to physicists, computational chemists, and cosmologists any longer. There is a diverse community of practioners with different needs. All share the same challenge, namely, what’s the next step once one’s computing needs are too big for their laptop? “That’s what we want to teach people, because the most important thing is for people to be productive with their computational research,” Wilson said.

TACC has two main objectives for the new TACC Institutes.

First, TACC wants to teach its user base how best to use the advanced computing systems and put together their computational workflows. “These instruments can help you achieve amazing things if you know how to use them. Training is a central component,” Wilson said.

Second, the center wants to contribute to workforce development. This means teaching people the skills they need to work in advanced computing, not just on the research side, but to work at a center like TACC or any of the other advanced computing centers. “I’ve had each of the groups develop content for the Institute with the philosophy of looking at it with the question, ‘What are the things we would look for in a candidate for an entry-level position?’ Wilson said.

In 2017, TACC led the first of seven Institutes — Designing and Administering Large-Scale Systems — which is designed for IT professionals setting up a cluster or data center for the first time or for experienced data center administrators who want to build leadership-class systems. Participants spent a week learning from TACC’s expert systems administrators about the tools, techniques, and practices TACC uses to build out some of the largest and highest performing clusters in the world. Students from across the U.S., Canada, and Puerto Rico attended.

In June, TACC led the Computational Techniques for Life Sciences Institute, which is designed to teach the basic skills necessary to develop and execute life sciences workflows on large-scale systems, run parallel analyses, use Bash and Python to chain common life sciences applications together to form more complex workflows, and analyze their result to gain useful insights.

Lindsay Waldrop, an assistant professor in biology at the New Mexico Institute of Mining and Technology, attended the Life Sciences Institute with experience computing on the command line, installing source code, and coding in Matlab and R. She was a little ahead of the curve. However, she still felt like there was a lot she needed to learn.

“My research questions involve a lot of experiments in fluid dynamics and animal biomechanics,” she said. “Increasingly, I realized that the types of questions I’m interested in are much better answered with computational modeling.”

Waldrop saw the Institute advertised through the Extreme Science and Engineering Discovery Environment (XSEDE) where she currently has a start-up allocation on Bridges at the Pittsburgh Supercomputing Center.

“This Institute has been an immersive experience where I could focus on getting specific skills, such as Python and Bash scripting, which was very attractive to me. I’ll definitely send my students to this because a lot of biology students don’t get computer science training.”

Along with academic researchers and students, TACC’s industry partners are also welcome to attend the Institutes. Members of TACC’s Science and Technology Affiliates for Research (STAR) program work on the same types of problems as the academic users, just with slightly different goals in mind.

“We want our STAR partners to be able to utilize our resources just as efficiently as our academic users,” Wilson said.

Art Kenney, an HPC Solution Architect with DELLEMC, said he took the Designing and Administering Large-Scale Systems Institute to gain more expertise and learn best practices in cluster design, management, security and daily use at “one of the top supercomputer centers in the world.”

“The course was excellent with a good combination of class time and real-world labs,” he said. “The instructors are experts in their field, very helpful, and actually work on the huge clusters onsite at TACC.”

Kenney said he highly recommends this course to others.

“It’s great training from HPC experts that work on very large scale clusters every day. This will short-cut your learning curve, as well as provide recommendations on which tools to use, combined with best practices evolved over time doing real-world cluster design, management, and security.”

Kenney said he plans to attend the Visualization and HPC Management Institutes to further his understanding of how the massive amounts of data generated are digested and visualized, as well as how the business side of HPC is handled.

Much of the content being presented at the TACC Institutes is new and is not provided through the regular training that TACC delivers to the UT Austin and the XSEDE communities.

“The real benefit is the opportunity to do boot camp-style intensive learning for one week and get all of the skills that would normally take a semester or more to acquire going to our regular training,” Wilson said. “We provide a closed environment with hands-on exercises to make sure that attendees retain the information, and most importantly, spend time talking to us about their specific problems.”

As the institutes continue to evolve in the years to come, Wilson says that the most important thing is ensuring that TACC meets the needs of the community.

“TACC is committed to making sure that training is a key component of everything that we do, whether that be in the form of our free training or these long-format Institutes,” Wilson said. “Training is as important as having the systems themselves. In the future, we’re hoping to have a series of topic videos allowing people to get questions answered about a particular concept. We want to be able to address all different styles of learning and we want to be able to address as large a community as possible. Our active user community is now 10,000 people and that will only continue to grow.”