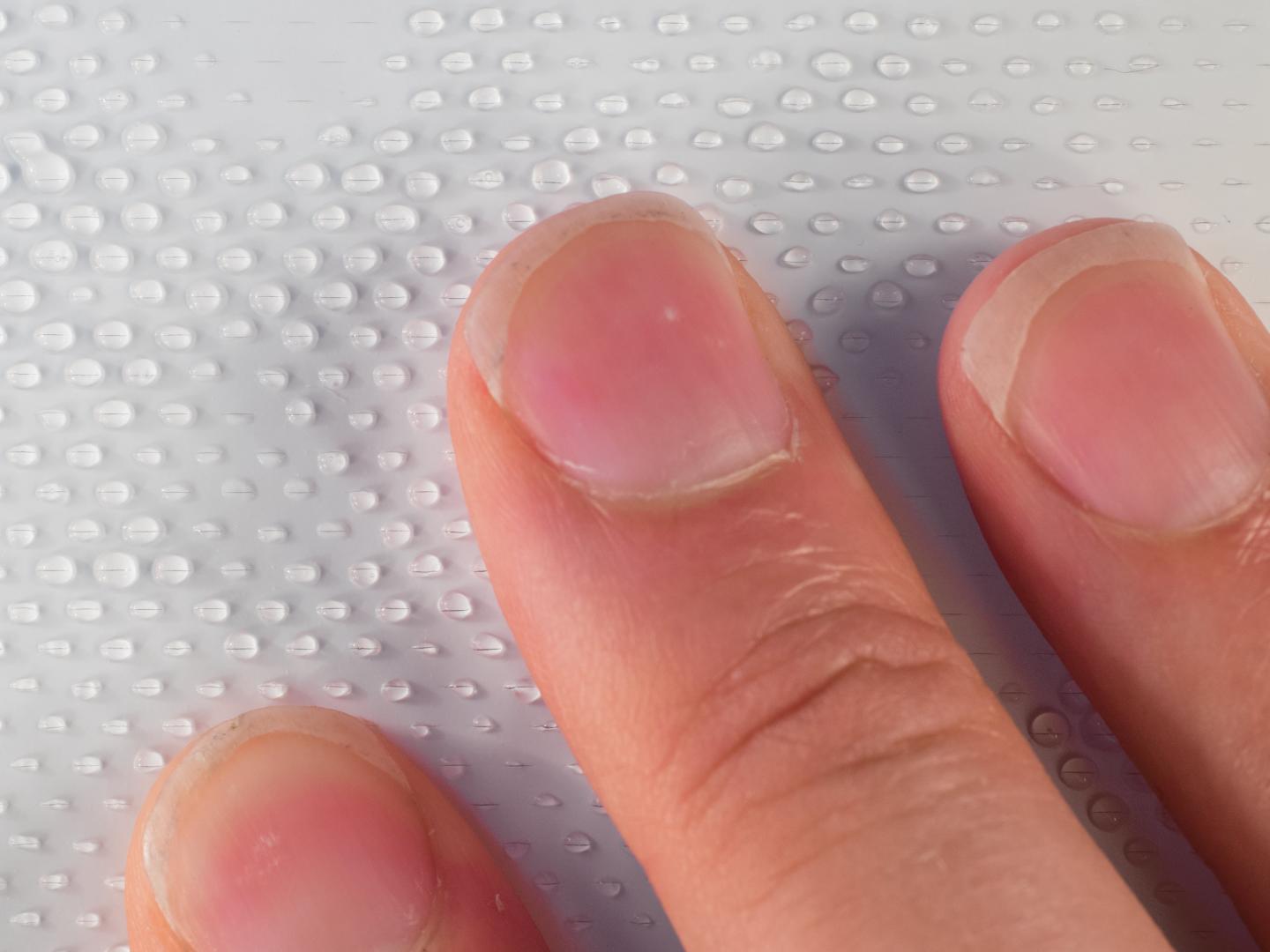 This is a close up of a Surfaceskins device showing the tiny valves that ‘pump’ alcohol gel onto the surface. Credit: Surfaceskins

Scientists have developed a novel weapon in the battle against deadly hospital-acquired infections – a textile that disinfects itself.

And independent tests show it can reduce bacteria levels by more than 90 per cent.

By incorporating the specially-engineered textile in a device designed to be used on hospital doors instead of the traditional aluminium door plate, that part of the door that people push to open it – they aim to bolster hand hygiene.

The self-disinfecting device – known as Surfaceskins – has been developed by a spin out company from the University of Leeds and is the culmination of seven years research and development.

Hospital doors are recognised as a key weak link in hygiene because of the number of times people touch them.

It takes just one person with dirty hands to pass through a door to put everyone else who follows at risk of cross contamination.

Surfaceskins antibacterial door pads work by dispensing a small quantity of alcohol gel onto the pad when it is pushed, to disinfect the surface ready for the next person to use the door.

This low-cost device, which incorporates three separate nonwoven textiles is designed to be replaced after seven days or one thousand pushes, whichever comes sooner.

Surfaceskins antibacterial door pads are not meant to replace the strict handwashing rules in hospitals, but instead provide an extra line of defence by helping clean hands to stay clean. Experts expect that Surfaceskins will increase people’s awareness of the importance of washing hands and hand hygiene.

A study into the effectiveness of the new technology has just been published in the Journal of Hospital Infection.

At the start of the study, both the Surfaceskins and control aluminium door plates were inoculated with bacteria at levels found on the hands of hospital staff. The study concluded that the Surfaceskins door pads were more effective than standard door plates over seven days in reducing the levels of three bacteria that commonly cause hospital-acquired infections: S. aureus, E. coli and E. faecalis.

Mark Wilcox, Professor of Medical Microbiology at the University, who led the independent evaluation, said: “Our results suggest that Surfaceskins door pads can help to reduce the contamination of doors by microbes.”

“They offer a new way to reduce the risk of the spread of bacteria and viruses in hospital environments and other settings where frequent contact with doors could undermine hand hygiene.”

According to data published in 2014 by the National Institute for Care and Excellence or NICE, 300,000 patients a year in England get hospital-acquired infections.

The infections mean increased treatment costs, estimated by NHS England to be around £1 billion a year, and put patients at risk of significant harm.

Four patents protect the innovation behind Surfaceskins. The device is fitted into a plastic holster which is attached to the door.

Surfaceskins contain a reservoir of alcohol gel and a membrane with tiny valves that dispense the gel onto the surface where it is pressed when opening a door, self-disinfecting it within seconds.

Chris Fowler, Chief Executive of the spin out that has developed the device, said: “Surfaceskins address a definite need, in a simple, effective and low-cost way. Designed to provide protection in many high-risk situations, the global market for Surfaceskins is immense.

“In addition to the successful NHS trials, many organisations outside healthcare have expressed serious interest in introducing these self-disinfecting products. Surfaceskins can play an important role wherever door users have an interest in maintaining clean hands.”

The company has also developed a door handle using the Surfaceskins technology.

Surfaceskins are being targeted at other industrial sectors where there is a need for meticulous hand hygiene such as in catering and hospitality. They could also be used on cruise ships where the spread of bacteria can lead to outbreaks of sickness.

On the back of successful trials and agreed distribution deals, Surfaceskins Ltd is now looking for £600,000 investment to expand their sales network and production capability at their Leeds-based facility.

Surfaceskins is a collaboration between the Nonwovens Innovation and Research Institute Ltd (NIRI), a spin out company from the University’s School of Design, and two industrial designers, Adam Walker and Simon Scott-Harden.

Since being established 12 years ago, NIRI, which has recently relocated into larger premises in Leeds City Centre, has successfully completed 400+ projects for over 200 clients.

Nonwovens is a group of textiles created by interlocking or bonding individual fibres or filaments together, and includes a wide range of products including wound dressings, nappies, filters, military clothing and imitation fur.