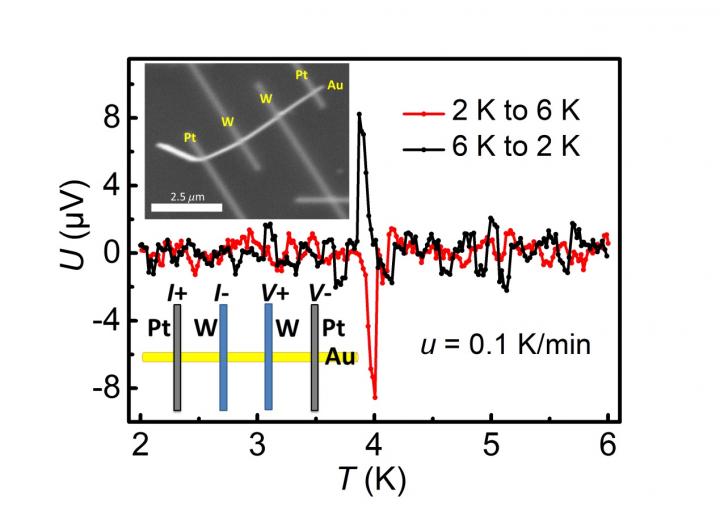 Non-local transport measurements reveal a novel voltage peak at superconducting transition temperature in gold nanowire with superconducting W electrodes. The voltage peak appears when cooling the sample across Tc, while the peak turns into dip in the warming process. Upper inset, a scanning electron microscope image of Au nanowire contacted by two superconducting W compound electrodes in the middle and two normal Pt electrodes at the ends. Lower inset, configuration of electrodes. In fact, the detected peak is irrelevant to the current, and similar phenomena can be observed even in the absence of current. Credit: Science China Press

Recently, Prof. Jian Wang at Peking University, in collaboration with Prof. QingFeng Sun at Peking University and Prof. Moses Chan at Penn State University, observed a novel voltage signal in the hybrid nanowire structure. Normally, for a superconductor-normal material junction, the voltage across the junction should be zero when the current is not applied. However, in Au nanowire contacted by superconducting W electrodes, a voltage peak appears at time scale of one minute when cooling the system across the proximity induced superconducting transition temperature (Tc), while the peak turns into dip in the warming process (see the Figure below). The formation of voltage peak is irrelevant to the applied current, and the peak amplitude is proportional to temperature scanning rate. These characteristics distinguish the observed voltage signal from earlier works. By using Ginzburg-Landau model, the rise of the peak can be understood as a result of the emergence of Cooper pairs with relatively lower free energy in the W electrode; meanwhile the diffusion of Cooper pairs and quasiparticles from the W electrode to the Au nanowire suppresses the rising of the voltage and results in a voltage drop. The observation of voltage peak may benefit from the nanoscale contact area in hybrid nanowire structure and relatively long diffusion time.

The detection of the voltage peak offers direct evidence that the free energy of a system would decrease after entering the superconducting state. Moreover, similar voltage signal was also detected in Pt nanostrip contacted by superconducting electrodes, demonstrating the universality of the effect. Since the voltage signal appears at Tc and the applied current is not necessary, our finding offers a new way to detect superconductivity in nanostructures without current induced damage or dissipation.

This work has been recently published in Science China-Physics, Mechanics & Astronomy (2018) with the title of “Novel voltage signal at proximity-induced superconducting transition temperature in gold nanowires”. Prof. Jian Wang at Peking University and Prof. Moses Chan at Penn State University are corresponding authors of this paper.