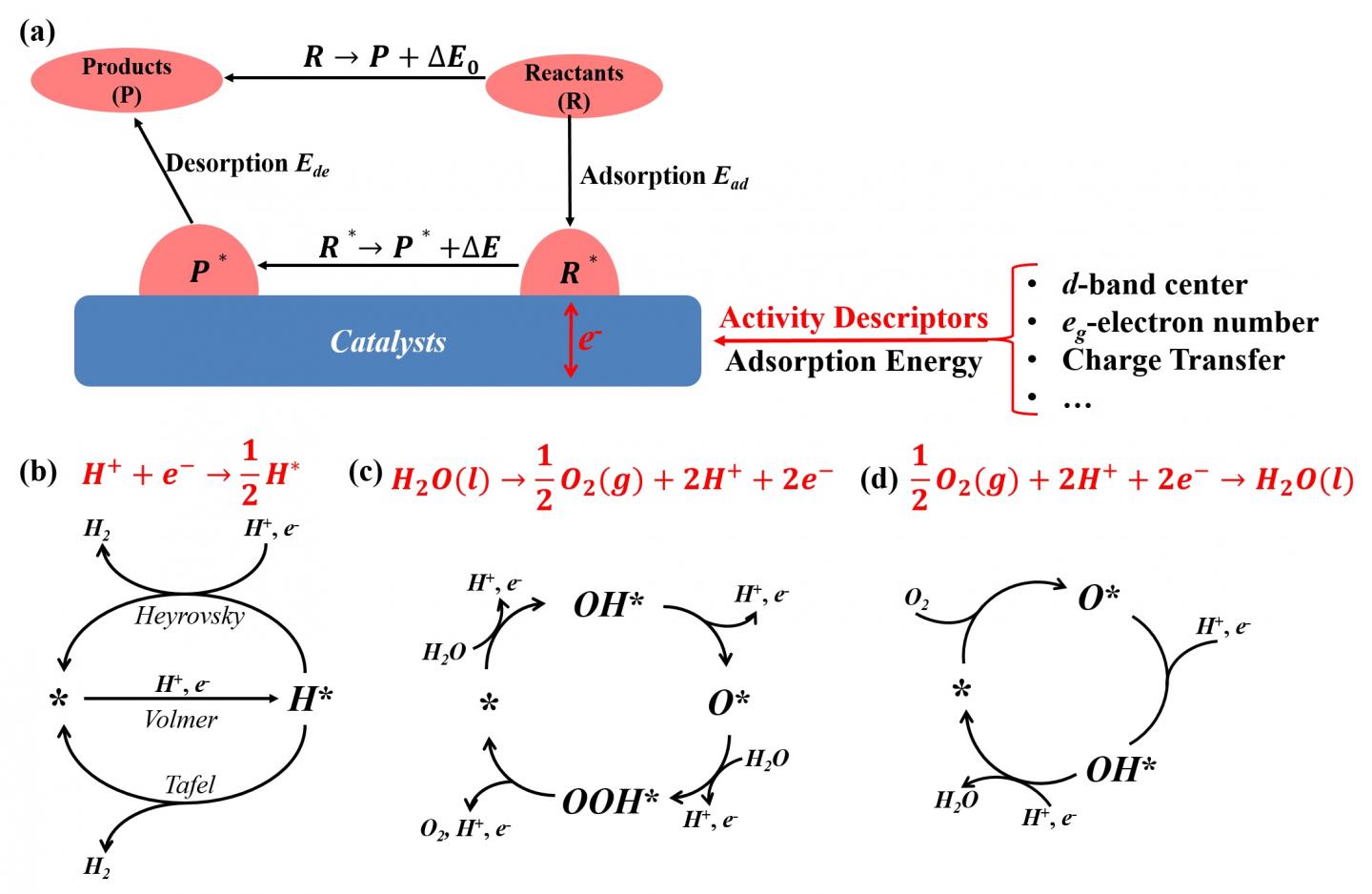 Under the environmental concerns such as pollution and greenhouse effect, environment-friendly energy storage applications such as fuel cells, ammonia production and lithium-air batteries are proposed to replace fossil resources. However, the high overpotential is one of the most urgent issues for the practical applications and electrocatalysts are applied to lower overpotential. There are some challenges to design high-activity catalysts for electrochemical conversions. Scientists from State Key Laboratory of High Performance Ceramics and Superfine Microstructure, Shanghai Institute of Ceramics, Chinese Academy of Sciences, Shanghai, China and Materials Genome Institute, Shanghai University, Shanghai, China reviewed some representative activity descriptors to screen high-activity catalysts in future high-throughput calculations and experiments. This work, entitled “Adsorption-Energy-Based Activity Descriptors for Electrocatalysts in Energy Storage Applications”, was published in National Science Review, 2017, https://doi.org/10.1093/nsr/nwx119.

These scientists outline a simple strategy to improve catalytic activity to reduce activation barriers of electrochemical reactions by tuning interfacial electronic coupling between the adsorbate and catalyst surface.

“The electrocatalytic processes usually involve the adsorption of reactants on the surfaces of catalysts, break some reactant bonds to form new chemical bonds between the catalyst and reactants, and result in activated intermediates. Because the catalytic activity is attributed to the interfacial electronic coupling, adsorption energy is a good descriptor to identify catalytic activity for surface reactions.”

Based on the free energy change of electrochemical reaction, the authors divided the whole electrochemical reaction into an intrinsic reaction part and a catalytic effect part. “The catalytic effect is directly reflected in the adsorption energy differences of reactants and products”, they stated. Adsorption energy as a catalytic descriptor in those typical reactions is detailedly discussed in on-electron pair reactions, evolution reactions and reduction reactions to present the effect of electronic coupling between catalysts and charged species on catalytic activity.

“Charge transfer is also an important part in electrochemical reactions and improve the catalytic activity. The principle of charge transfer is to remove charge from stable bonds in reactants and lower the activation barrier of the rate-limiting step”, they added.

“Fundamental understanding of structure-activity relationships between catalytic activity and physical properties of catalyst materials is helpful to choose effective descriptors and to develop efficient multiscale computational models for an accurate description of catalyst materials. High-throughput calculations and experiments can be employed to speed up the screening of catalyst materials and shorten the development cycle in the future studies”, the scientists forecast. “However, even solving the intrinsic problem of activity, catalysts still face the vital requirements of stability and safety before practical applications”, they underline, “Those stability and safety issues also should be considered before one catalyst, which is screened to perform high catalytic activity, is put into application.”