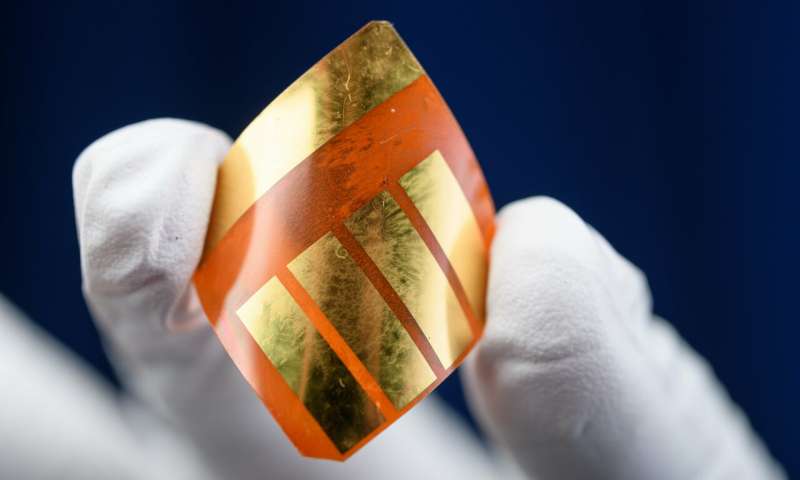 A researcher at Georgia Tech holds a perovskite-based solar cell, which is flexible and lighter than silicon-based versions. Credit: Rob Felt, Georgia Tech

“Perovskites could really change the game in solar,” David Fenning, a professor of nanoengineering at the University of California San Diego, said in a statement. “They have the potential to reduce costs without giving up performance. But there’s still a lot to learn fundamentally about these materials.”

The structure of perovskite crystals is broken down into three different regions, where one part is formed from an element lead, the second portion is made up of an organic component like methylammonium and the final area is comprised of other halides like bromine and iodine.

Recently, there has been a push to try different recipes of the three crystal components that will yield better efficiencies.  This includes adding iodine and bromine to the lead component of the structure, as well as substituting cesium and rubidium to the part of the perovskite generally occupied by organic molecules.

“We knew from earlier work that adding cesium and rubidium to a mixed bromine and iodine lead perovskite leads to better stability and higher performance,” Juan-Pablo Correa-Baena, an assistant professor in the Georgia Tech School of Materials Science and Engineering, said in a statement.

However, it was not previously known why exactly adding alkali metals improved the performance of the solar perovskites.

The researchers opted to use high-intensity X-ray mapping to get a better glimpse at the perovskites at the nanoscale and see how each individual element plays a role in improving the performance of the device.

The researchers found that when cesium and rubidium were added to the mixed bromine iodine lead perovskite, it caused the bromine and iodine to mix more homogeneously. This mixture results in up to a 2 percent higher conversion efficiency than the device shows without the cesium and rubidium additives.

“We found that uniformity in the chemistry and structure is what helps a perovskite solar cell operate at its fullest potential,” Fenning said. “Any heterogeneity in that backbone is like a weak link in the chain.”

Despite the success of adding the alkali metals, the researchers found that the halide metals themselves remained clustered within their own cation, which created inactive dead zones that do not produce a current.

“This was surprising,” Fenning said. “Having these dead zones would typically kill a solar cell. In other materials, they act like black holes that suck in electrons from other regions and never let them go, so you lose current and voltage. But in these perovskites, we saw that the dead zones around rubidium and cesium weren’t too detrimental to solar cell performance, though there was some current loss. This shows how robust these materials are but also that there’s even more opportunity for improvement.”

The researchers plan to add to their understanding of how perovskite-based devices work at the nanoscale in an effort to drive down the price and improve the efficiency of these devices.

“Perovskite solar cells offer a lot of potential advantages because they are extremely lightweight and can be made with flexible plastic substrates,” Correa-Baena said. “To be able to compete in the marketplace with silicon-based solar cells, however, they need to be more efficient.”

Both the U.S. Department of Energy and the National Science Foundation sponsored the study, which was published in Science.