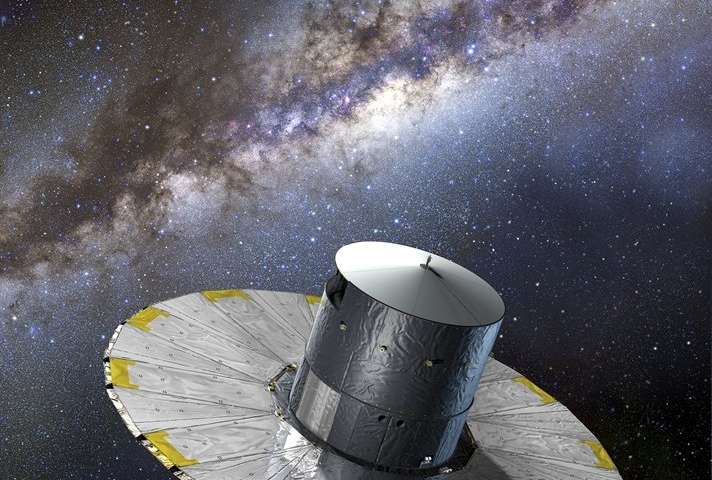 Apart from a billion Milky Way stars, ESA's Gaia spacecraft also observes extragalactic objects. Its automated alert system notifies astronomers whenever Gaia spots a transient event. A team of astronomers have found out that by tweaking the existing automated system, Gaia can be used to detect hundreds of peculiar transients in the centres of galaxies. They found about 480 transients over a period of about a year. Their new method will be implemented in the system as soon as possible allowing astronomers to determine the nature of these events. The findings will be published in the November issue of the Monthly Notices of the Royal Astronomical Society.

In 2013, ESA launched its Gaia spacecraft to measure the location of a billion stars in the Milky Way and tens of millions of galaxies. Each position on the sky enters Gaia's view once every month, for a total of about 70 times during the mission. This allows the spacecraft to spot transient events, such as supermassive black holes ripping stars apart or stars exploding as a supernova. Gaia will notice a change in brightness when it returns to the same patch of sky a month later. A team of astronomers from SRON, Radboud University and the University of Cambridge now report nearly 500 transients occurring in the centres of galaxies over a period of one year.

Astronomers Zuzanna Kostrzewa-Rutkowska, Peter Jonker (both affiliated with SRON and Radboud University), Simon Hodgkin and others searched the Gaia database for transient events around the nuclei of galaxies in the period between July 2016 and June 2017. They used a galaxy catalogue—from the Sloan Digital Sky Survey Release 12— and a custom-made mathematical tool. The new tool allows the researchers to identify rare luminous events coming from galactic centers. They dug up 480 events, of which only five were picked up before by the alert system.

Rapidly alerting the astronomical community is key for many of the events found. For about one hundred transients nothing out of the ordinary was observed by Gaia the month before and the month after detection, indicating that the event leading to the enhanced emission of light was short. 'Such events have great value because they could allow astronomers to study for a brief period previously invisible supermassive black holes,' says Jonker. 'Especially the short-duration events could point us to the location of the so far elusive intermediate-mass black holes ripping stars apart.'

The leading explanation for most events is that supermassive black holes residing in the nuclei of galaxies suddenly become much more active as the amount of gas falling into the black hole surges and lights up the close environment of the black hole. This fresh fuel may be extracted from a star which is ripped apart by the enormous gravitational pull of the black hole.

Peter Jonker, with Zuzanna Kostrzewa-Rutkowska and others from his group, has recently started a dense campaign to decipher the nature of the 480 new transients using the La Palma-based William Herschel Telescope.