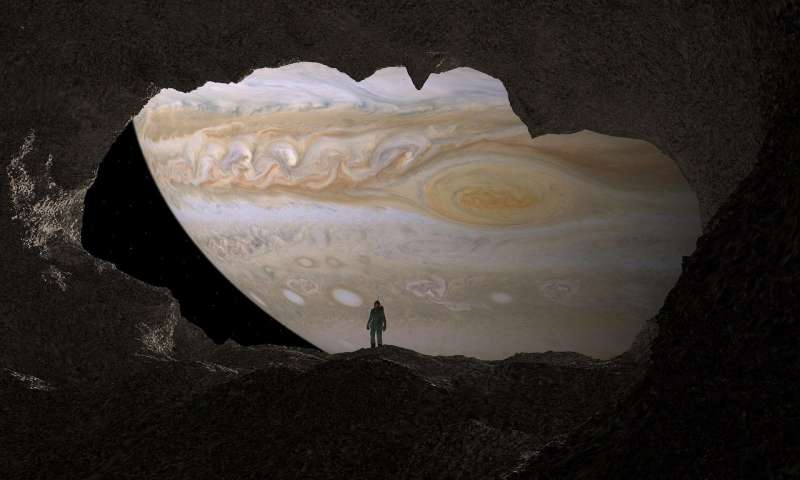 An international team led by the astrophysicist Carolina von Essen, has used the OSIRIS spectrograph on the Gran Telescopio Canarias (GTC) to study the chemical composition of a planet whose equilibrium temperature is around 3,200 °C.

WASP-33, the planet-star system that is the subject of this research work, lies some 380 light years away from Earth. The host star is the first Delta Scuti star known to be orbited by a hot Jupiter. The pronounced stellar pulsations, showing periods comparable to the primary transit duration, interfere with transit modeling. Thus, it is extremely challenging to carry out a proper characterization of the physical properties of the exoplanet without addressing the variability of the star.

WASP-33b is very interesting on its own: its temperature is around 3,200 °C, which places it among the few ultra-hot Jupiter exoplanets known to date. Its orbital period is as short as 29 hours, and its orbit is almost perpendicular to the equatorial plane of the star. Among other collection of peculiarities, its sense of motion is contrary to that of the rotation of the star.

The study, published in the journal Astronomy & Astrophysics, analyses the chemical composition of its atmosphere. This is important because “The current models of exoplanetary atmospheres predict that the ultra-hot Jupiters should be free of clouds, and present a range of oxides in the visible spectrum, such as vanadium oxide, titanium oxide, and aluminium oxide,” explains Carolina von Essen, of the University of Aarhus (Denmark), the principal investigator of this study. “But there is a limited number of exoplanets for which these molecules have been detected with a high significance, which makes us question the models.”

A detailed determination of the chemical composition of ultra-hot Jupiters has the potential to challenge current models of exoplanet atmospheres. There is a close symbiosis between models and observations, of which this study is a good example, as it unveils the first sign of aluminium oxide in the atmosphere of WASP-33b, as theory predicted.

“GTC and OSIRIS sensitivity and performances have been key to the success of these challenging observations,” says Herve Bouy, co-author of this article. “This combination has made of the GTC, in recent years, a key telescope in the study of exoplanetary atmospheres,” adds Antonio Cabrera Lavers, GTC Head of Science Operations.

The high-precision data collected by GTC/OSIRIS allowed this team to construct a physically motivated model of the intrinsic variability of the host star. Here, the pulsations of WASP-33 and their amplitude changes with wavelength were taken into consideration while determining the chromatic variability of the planetary size. “Using modern methods for determining the chemical composition of WASP-33b, we find that the feature observed in the transmission spectrum of WASP-33b between 450 and 550 nm can best be explained by aluminium oxide in its atmosphere,” says von Essen. The team has not encountered significant evidence of other molecules, but a rather high abundance of aluminium oxide. Thus, new observations from ground-based and space-based instruments will be necessary to confirm this detection.