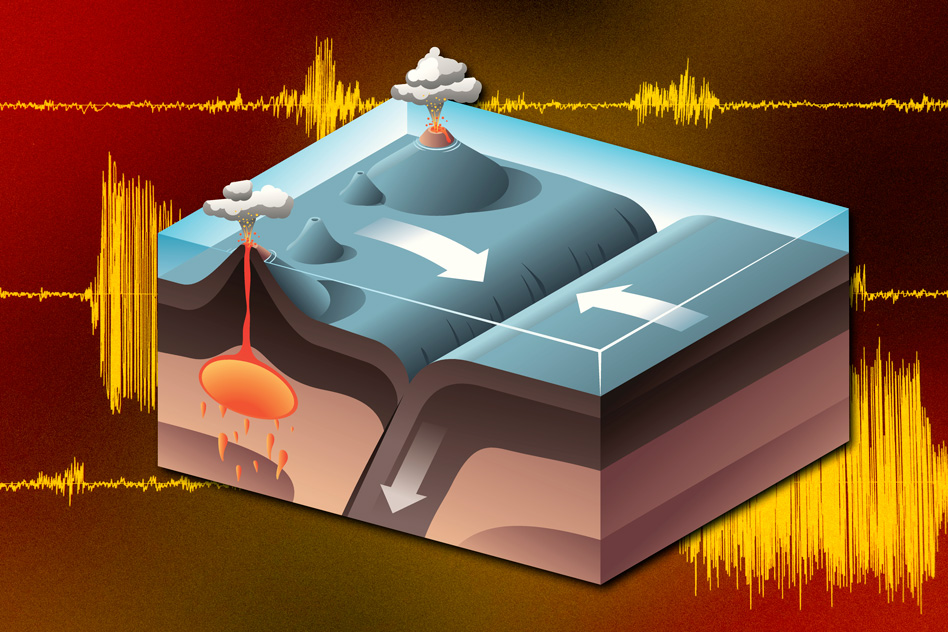 New findings suggest the ancient Earth harbored a mantle that was much more efficient at drawing down pieces of the planet’s crust. Image: MIT News

Plate tectonics has shaped the Earth’s surface for billions of years: Continents and oceanic crust have pushed and pulled on each other, continually rearranging the planet’s façade. As two massive plates collide, one can give way and slide under the other in a process called subduction. The subducted slab then slips down through the Earth’s viscous mantle, like a flat stone through a pool of honey.

For the most part, today’s subducting slabs can only sink so far, to about 670 kilometers below the surface, before the mantle’s makeup turns from a honey-like consistency, to that of paste — too dense for most slabs to penetrate further. Scientists have suspected that this density filter existed in the mantle for most of Earth’s history.

Now, however, geologists at MIT have found that this density boundary was much less pronounced in the ancient Earth’s mantle, 3 billion years ago. In a paper published in Earth and Planetary Science Letters, the researchers note that the ancient Earth harbored a mantle that was as much as 200 degrees Celsius hotter than it is today — temperatures that may have brewed up more uniform, less dense material throughout the entire mantle layer.

The researchers also found that, compared with today’s rocky material, the ancient crust was composed of much denser stuff, enriched in iron and magnesium. The combination of a hotter mantle and denser rocks likely caused subducting plates to sink all the way to the bottom of the mantle, 2,800 kilometers below the surface, forming a “graveyard” of slabs atop the Earth’s core.

Their results paint a very different picture of subduction than what occurs today, and suggests that the Earth’s ancient mantle was much more efficient in drawing down pieces of the planet’s crust.

“We find that around 3 billion years ago, subducted slabs would have remained more dense than the surrounding mantle, even in the transition zone, and there’s no reason from a buoyancy standpoint why slabs should get stuck there. Instead, they should always sink through, which is a much less common case today,” says lead author Benjamin Klein, a graduate student in MIT’s Department of Earth, Atmospheric and Planetary Sciences (EAPS). “This seems to suggest there was a big change going back in Earth’s history in terms of how mantle convection and plate tectonic processes would have happened.”

“There’s this open question as to when plate tectonics really started in Earth’s history,” Klein says. “There’s general consensus that it was probably going on back at least 3 billion years ago. This is also when most models suggest the Earth was at its hottest.”

Around 3 billion years ago, the mantle was probably about 150-200 C warmer than it is today. Klein, Jagoutz, and Behn investigated whether hotter temperatures in the Earth’s interior made a difference in how tectonic plates, once subducted, were transported through the mantle.

“Our work started as this thought experiment to say, if we know temperatures were much hotter, how might that have modulated what the tectonics looked like, without changing it wholesale?” Klein says. “Because the debate before was this binary argument: Either there was plate tectonics, or there wasn’t, and we’re suggesting there’s more room in between.”

The team carried out its analysis, making the assumption that plate tectonics was indeed shaping the Earth’s surface 3 billion years ago. They looked to compare the density of subducting slabs at that time with the density of the surrounding mantle, the difference of which would determine how far slabs would have sunk.

To estimate the density of ancient slabs, Klein compiled a large dataset of more than 1,400 previously analyzed samples of both modern rocks and komatiites — classic rock types that were around 3 billion years ago but are no longer produced today. These rocks contain a higher amount of dense iron and magnesium compared to today’s oceanic crust. Klein used the composition of each rock sample to calculate the density of a typical subducting slab, for both the modern day and 3 billion years ago.

The team used a thermodynamic model to determine the density profile of each subducting slab, or how its density changes as it sinks through the mantle, given the mantle’s temperature, which they took from others’ estimates and a model of the slab’s temperature. From these calculations, they determined the depth at which each slab would become less dense than the surrounding mantle.

At this point, they hypothesized that a “density flip” should occur, such that a slab should not be able to sink past this boundary.

“There seems to be this critical filter and control on the movement of slabs and therefore convection of the mantle,” Klein says.

The team found that their estimates for where this boundary occurs in the modern mantle — about 670 kilometers below the surface — agreed with actual measurements taken of this transition zone today, confirming that their method may also accurately estimate the ancient Earth.

“Today, when slabs enter the mantle, they are denser than the ambient mantle in the upper and lower mantle, but in this transition zone, the densities flip,” Klein says. “So within this small layer, the slabs are less dense than the mantle, and are happy to stay there, almost floating and stagnant.”

For the ancient Earth, 3 billion years ago, the researchers found that, because the ancient mantle was so much hotter than today, and the slabs much denser, a density flip would not have occurred. Instead, subducting slabs would have sunk straight to the bottom of the mantle, establishing their final resting place just above the Earth’s core.

Jagoutz says the results suggest that sometime between 3 billion years ago and today, as the Earth’s interior cooled, the mantle switched from a one-layer convection system, in which slabs flowed freely from upper to lower layers of the mantle, to a two-layer configuration, where slabs had a harder time penetrating through to the lower mantle.

“This shows that when a planet starts to cool down, this boundary, even though it’s always there, becomes a significantly more profound density filter,” Jagoutz says. “We don’t know what will happen in the future, but in theory, it’s possible the Earth goes from one dominant regime of one-layer convection, to two. And that’s part of the evolution of the entire Earth.”

This research was funded, in part, by the National Science Foundation.