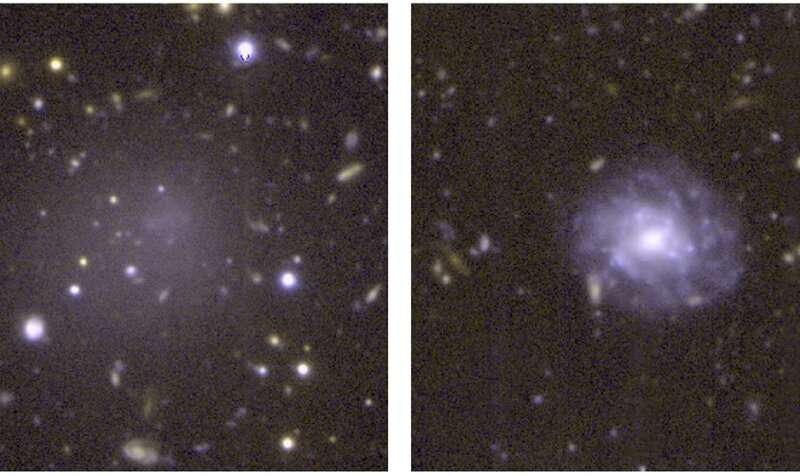 DGSAT I (left), an ultra-diffuse galaxy (UDG), is shown next to a normal spiral galaxy (right) for comparison. Both are similar in size, but UDGs like DGSAT I have so few stars, you can see right through them, to the galaxies in the background. Credit: A. ROMANOWSKY/UCO/D. MARTINEZ-DELGADO/ARI

A team of astronomers led by the University of California Observatories (UCO) have studied in great detail a galaxy so faint and in such pristine condition it has acted as a time capsule, sealed shortly after the dawn of our universe only to be opened by the newest technology at W. M. Keck Observatory.

This transparent, ghost-like galaxy, named DGSAT I, contradicts the current theory on the formation of UDGs. All previously studied UDGs have been in galaxy clusters, which informed the basis for the theory that they were once “normal” galaxies, but with time have been blasted into a fluffy mess due to violent events within the cluster.

“There seemed to be a relatively tidy picture of the origins of galaxies, from spirals to ellipticals, and from giants to dwarfs,” said lead author Ignacio Martín-Navarro, a postdoctoral scholar at UCO. “However, the recent discovery of UDGs raised new questions about how complete this picture is. All of the UDGs that have been studied in detail so far were within galaxy clusters: dense regions of violent interaction where the galaxies’ characteristics at birth have been scrambled up by a difficult adolescence.”

The team’s results will be published in the April 11, 2019 issue of the Monthly Notices of the Royal Astronomical Society and is now available online.

Because DGSAT I is a rare exception of a UDG found away from a cluster, it can provide a clearer window into the past. There has not been much activity around it that could taint its composition and evolution. In order to find out what caused this galaxy to be so sparse in starlight, the team used KCWI to map the composition of the galaxy.

“The chemical composition of a galaxy provides a record of the ambient conditions when it was formed, like the way that trace elements in the human body can reveal a lifetime of eating habits and exposure to pollutants,” said co-author Aaron Romanowsky, a UCO astronomer and Associate Professor of the Physics and Astronomy Department at San José State University.

DGSAT I surprised researchers with its chemical makeup. Today’s galaxies typically have more heavy elements in them, like iron and magnesium, compared to ancient galaxies born just after the Big Bang. But KCWI revealed that DGSAT I appears to be anemic; the galaxy’s iron content is remarkably low, as if it formed from a nearly pristine gas cloud that was unpolluted by the supernova death of previous stars. And yet DGSAT I’s magnesium levels are normal, consistent with what astronomers expect to find in modern galaxies. This is strange because both of these elements are released in supernova events; you typically don’t find one without the other.

“We don’t understand this combination of pollutants, but one of our ideas is that extreme blasts of supernovae caused the galaxy to pulsate in size during its adolescence, in a way that retains magnesium preferentially to iron,” said Romanowsky.

UDGs are a relatively new class of galaxies that were first discovered in 2015. They are as large as the Milky Way but have between 100 to 1000 times fewer stars than our own galaxy, making them barely visible and difficult to study.

KCWI is designed to overcome that obstacle with its extreme sensitivity and ability to capture high-resolution spectra of the faintest and farthest objects in our universe like UDGs.

“There is only one other instrument in the world with the capabilities of KCWI that allows us to measure the chemical composition of low surface brightness galaxies,” said co-author Jean Brodie, Professor of Astronomy and Astrophysics at UCO. “But that one is in the Southern hemisphere where we don’t have a good view of DGSAT I, which lies in the North.”

KCWI performs a type of observation called integral field spectroscopy, which captures data in 3-D instead of 2-D. Traditionally, there were two ways for astronomers to study celestial objects, either through imaging or through spectroscopy. This instrument breaks the barrier between the two. In a single observation, KCWI captures both the image, as well as the spectrum of each pixel in the image, which reveals the object’s physical properties such as composition, temperature, velocity, and more.

“It’s these kinds of observations that we built KCWI for; to continue pushing the frontier of getting the most information out of the faintest objects,” said John O’Meara, chief scientist at Keck Observatory. “We’re very excited to see how many more objects like DGSAT I we can study with Keck and continue to transform our understanding of how galaxies form and change with time.”

The researchers plan to use KCWI again, this time to conduct a deeper observation of another UDG similar to DGSAT I; they plan to tease out its composition in greater detail in hopes of unraveling more data that could help astronomers zero in on the origin of UDGs.

“Various ideas have been presented, from the mundane to the exotic. One intriguing possibility is that some of these ghostly galaxies are living fossils from the dawn of the universe when stars and galaxies emerged in a much different environment than today,” said Romanowsky. “Their birth is truly a fascinating mystery that our team is working on solving.”