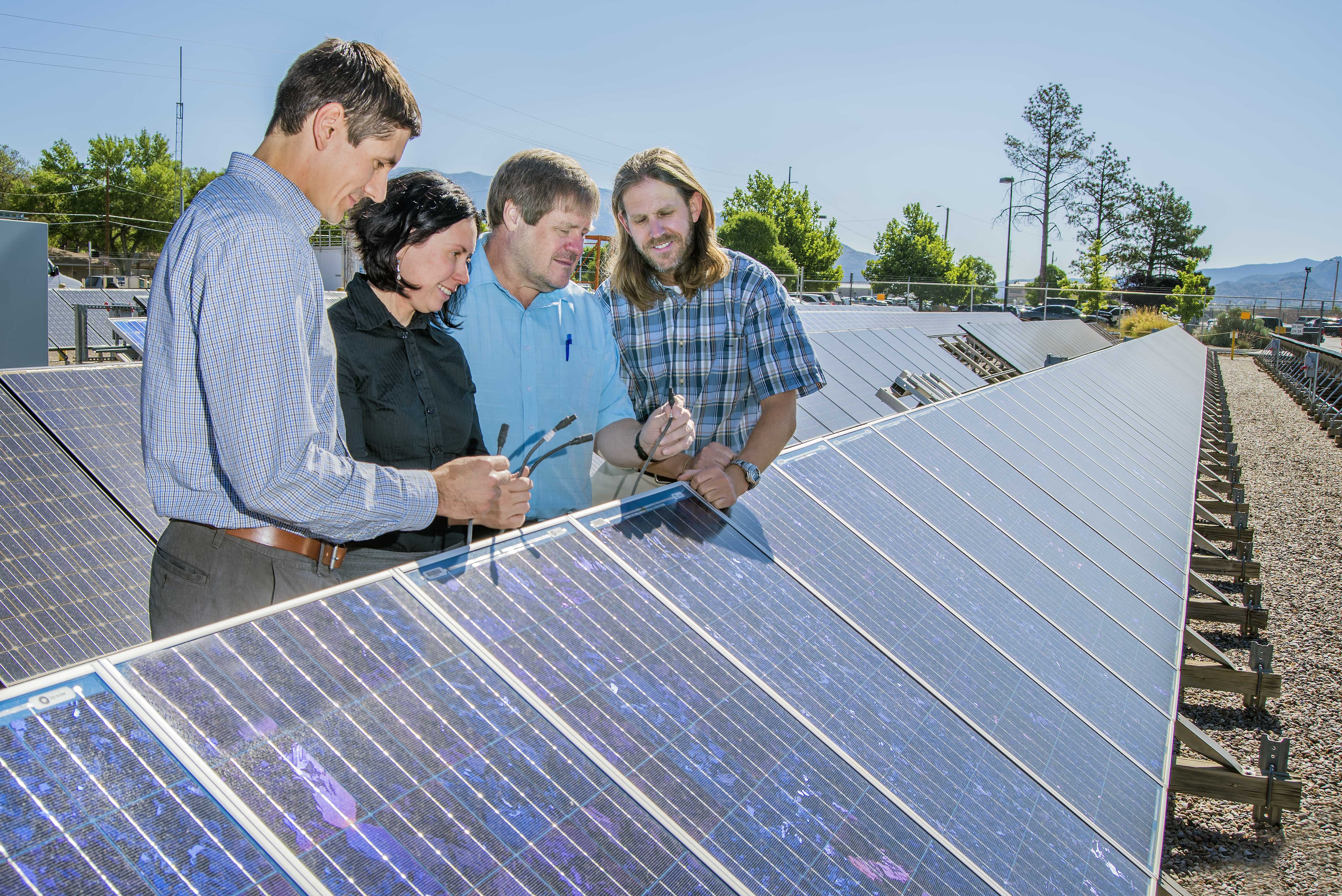 People think of corrosion as rust on cars or oxidation that blackens silver, but it also harms critical electronics and connections in solar panels, lowering the amount of electricity produced.

“It’s challenging to predict and even more challenging to design ways to reduce it because it’s highly dependent on material and environmental conditions,” said Eric Schindelholz, a Sandia National Laboratories materials reliability researcher who studies corrosion and how it affects photovoltaic (PV) system performance.

Sandia researchers from different departments collaborate to accelerate corrosion under controlled conditions and use what they learn to help industry develop longer-lasting PV panels and increase reliability. For example, work by Olga Lavrova of Sandia’s Photovoltaic and Distributed Systems Integration department demonstrated, for the first time, a link between corrosion and the risk of arc faults in PV systems’ electrical connections. Research by Erik Spoerke of Sandia’s Electronic, Optical and Nano Materials department focuses on developing new nanocomposite films that could dramatically increase reliability.

“One of our primary goals is to predict how fast corrosion will occur and what damage it does, given certain environments and materials,” Schindelholz said. “This, in turn, gives us information to select the right materials for design or to develop materials for corrosion-resistance for a particular environment. It also allows us to assess the health and operational risk of systems as they age. This is especially important for solar energy systems, which are susceptible to corrosion but are expected to last for decades.”

Corrosion is no small problem. A 2002 study by the National Association of Corrosion Engineers, backed by the Federal Highway Administration, estimated corroding metals in various industries, infrastructure and manufacturing cost $276 billion annually.

“Along the coast of Florida, it’s humidity and sea salt in the air. In Albuquerque, we have high ultraviolet (UV) radiation, so UV might be one of the important parameters here. The parameters driving corrosion shift with location and materials,” Schindelholz said. “The challenge lies in identifying the important parameters — and then tuning the knobs in the lab to get something that replicates what we see in an outdoor environment.”

Sandia belongs to a new consortium aimed at speeding up development of new materials for photovoltaic modules, increasing reliability and lowering the cost of solar power-generated electricity. The Durable Module Materials National Lab Consortium (DuraMat) wants to build bridges between the national laboratories and industry so research at the labs can benefit the PV community. DuraMat’s importance is underscored by the fact materials account for about 40 percent of total PV module costs.

DuraMat, led by the National Renewable Energy Laboratory in partnership with Sandia, Lawrence Berkeley National Laboratory and the SLAC National Accelerator Laboratory, will receive about $30 million over five years from the Department of Energy’s (DOE) SunShot Initiative. The consortium is part of the Energy Materials Network, created by the DOE’s Office of Energy Efficiency and Renewable Energy.

Lavrova leads projects on the reliability of PV systems, studying how aging affects solar cells and components and how everything performs together. Her team works with Schindelholz on two projects under the SunShot Initiative, a national effort to make solar energy cost-competitive with other forms of electricity by decade’s end. She also contributes to the module durability effort under DuraMat.

One project, in collaboration with the Electric Power Research Institute, studies PV modules from different manufacturers to give the makers information on what kind of degradation they might expect over 30 years to help identify ways to slow it down. Sandia applies accelerated aging principles to speed up studies of slowly developing effects, including corrosion.

The second project, with Case Western Reserve University, studies corrosion and other degradation from a forensic angle — looking back to see what’s already occurred. Lavrova’s team takes a big data analysis approach to study and analyze information from existing installations worldwide. “Is it 1 percent degradation a year or is it 2 percent? Maybe we’ll see some that are a half percent, maybe we’ll see some that are 10 percent. Was it a bad original product or was it installed in Costa Rica where the humidity is 80 percent every day?” she said.

Spoerke’s team wants to block corrosion altogether. Collaborating with Texas A&M professor Jaime Grunlan, the team is developing nanocomposite films made from inexpensive materials as barriers against water vapor and corrosive gases. The team hopes such composite materials, some 100 times thinner than a human hair, will improve ways to protect solar cells from corrosion.

Inorganic components and organic polymers that make up thin films must be designed and mixed carefully. “It’s about assembling those structures in the right way so that you can use inexpensive materials and still get the benefits you want,” Spoerke said. “If you build a house, it’s not just piling together the drywall and two-by-fours and shingles. You’ve got to use the two-by-fours to make the frame, set the drywall on the two-by-fours, and assemble the shingles on the roof.”

Thin films aren’t the sole answer, but “I can envision that a technology like the one that we’re developing could be part of a collaborative materials system to help replace glass in next-generation PV applications,” he said.

Sandia has studied corrosion for decades, analyzing the problem in all kinds of systems because anything containing metal is susceptible. Solar cells’ electrical components are protected from corrosion by encapsulating polymers, sealants and glass, but water vapor and corrosive gases can permeate as materials and packaging degrade.

Materials, for example, typically corrode faster in the higher temperatures and humidity of tropical coastal regions than in coastal Antarctica.

Researchers accelerate these real-world conditions in environmental chambers to examine corrosion of electronics and other PV system components. Accelerated tests artificially speed up the corrosion effects of temperature, humidity, pollutants and salt water. For example, salt on icy winter roads or near oceans corrodes cars over time. Since automotive manufacturers can’t wait decades to see how their products resist that, accelerated laboratory tests might spray salt continuously on a surface to qualify coatings and body materials to ensure they’ll be safe and reliable over a product’s lifetime.

Engineers use corrosion chambers to study different materials in systems that must meet particular corrosion requirements, or to expose an electronic component to the environment to see what happens over time.

“Instead of waiting for 30 years of operation outside under the sun, we bring our PV panels inside to expose them to much higher concentrations of light or put them in thermal chambers to simulate the equivalent of years of temperature cycles,” Lavrova said. Accelerated lifetime experiments show in six months what could happen over decades, she said.

Sandia also studies mechanisms underlying corrosion. “That’s a greater challenge,” Schindelholz said. “In atmospheric corrosion we have the chemistry of the atmosphere, the particles landing on surfaces, relative humidity, temperature and so on. We have to understand the interplay of these factors and their interaction with the metal surface.”

Can we ever get the lead out? R&D 100 winner of the day: GridDamper