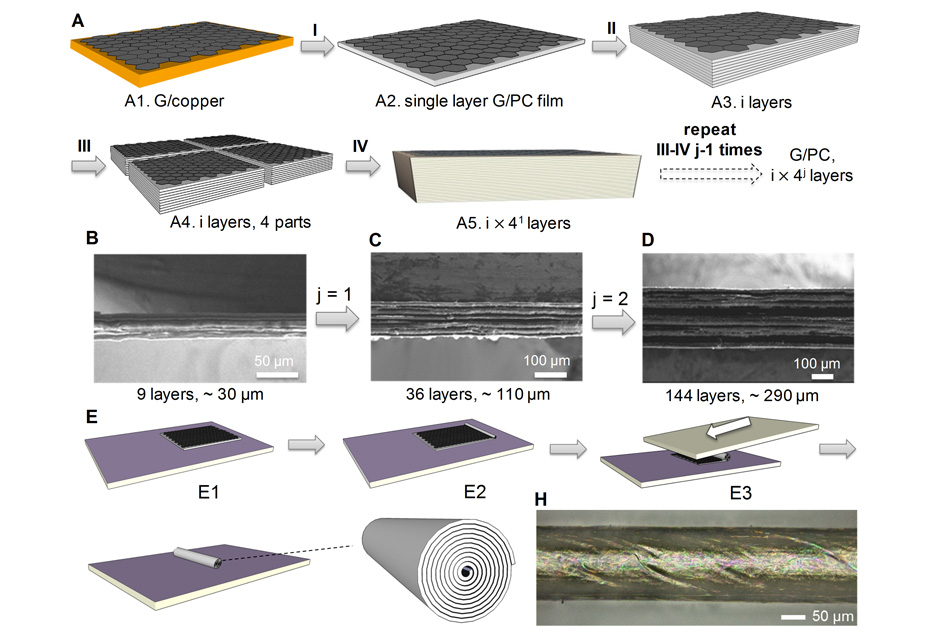 The process of making a stack of parallel sheets of graphene starts with a chemical vapor deposition process (I) to make a graphene sheet with a polymer coating; these layers are then stacked (II), folded and cut (III) and stacked again and pressed, multiplying the number of layers. The team used a related method the team to produce scroll-shaped fibers. (Credit:MIT)

Adapting an old trick used for centuries by both metalsmiths and pastry makers, a team of researchers at MIT has found a way to efficiently create composite materials containing hundreds of layers that are just atoms thick but span the full width of the material. The discovery could open up wide-ranging possibilities for designing new, easy-to-manufacture composites for optical devices, electronic systems, and high-tech materials.

The work is described this week in a paper in Science by Michael Strano, the Carbon P. Dubbs Professor in Chemical Engineering; postdoc Pingwei Liu; and 11 other MIT students, postdocs, and professors.

Materials such as graphene, a two-dimensional form of pure carbon, and carbon nanotubes, tiny cylinders that are essentially rolled-up graphene, are “some of the strongest, hardest materials we have available,” says Strano, because their atoms are held together entirely by carbon-carbon bonds, which are “the strongest nature gives us” for chemical bonds to work with. So, researchers have been searching for ways of using these nanomaterials to add great strength to composite materials, much the way steel bars are used to reinforce concrete.

The biggest obstacle has been finding ways to embed these materials within a matrix of another material in an orderly way. These tiny sheets and tubes have a strong tendency to clump together, so just stirring them into a batch of liquid resin before it sets doesn’t work at all. The MIT team’s insight was in finding a way to create large numbers of layers, stacked in a perfectly orderly way, without having to stack each layer individually.

Although the process is more complex than it sounds, at the heart of it is a technique similar to that used to make ultrastrong steel sword blades, as well as the puff pastry that’s in baklava and napoleons. A layer of material—be it steel, dough, or graphene—is spread out flat. Then, the material is doubled over on itself, pounded or rolled out, and then doubled over again, and again, and again.

With each fold, the number of layers doubles, thus producing an exponential increase in the layering. Just 20 simple folds would produce more than a million perfectly aligned layers.

Now, it doesn’t work out exactly that way on the nanoscale. In this research, rather than folding the material, the team cut the whole block—itself consisting of alternating layers of graphene and the composite material—into quarters, and then slid one quarter on top of another, quadrupling the number of layers, and then repeating the process. But the result was the same: a uniform stack of layers, quickly produced, and already embedded in the matrix material, in this case polycarbonate, to form a composite.

In their proof-of-concept tests, the MIT team produced composites with up to 320 layers of graphene embedded in them. They were able to demonstrate that even though the total amount of the graphene added to the material was minuscule—less than 1/10 of a percent by weight—it led to a clear-cut improvement in overall strength.

“The graphene has an effectively infinite aspect ratio,” Strano said, since it is infinitesimally thin yet can span sizes large enough to be seen and handled. “It can span two dimensions of the material,” even though it is only nanometers thick. Graphene and a handful of other known 2D materials are “the only known materials that can do that,” he added.

The team also found a way to make structured fibers from graphene, potentially enabling the creation of yarns and fabrics with embedded electronic functions, as well as yet another class of composites. The method uses a shearing mechanism, somewhat like a cheese slicer, to peel off layers of graphene in a way that causes them to roll up into a scroll-like shape, technically known as an Archimedean spiral.

That could overcome one of the biggest drawbacks of graphene and nanotubes, in terms of their ability to be woven into long fibers: their extreme slipperiness. Because they are so perfectly smooth, strands slip past each other instead of sticking together in a bundle. And the new scrolled strands not only overcome that problem, they are also extremely stretchy, unlike other super-strong materials such as Kevlar. That means they might lend themselves to being woven into protective materials that could “give” without breaking.

One unexpected feature of the new layered composites, Strano says, is that the graphene layers, which are extremely electrically conductive, maintain their continuity all the way across their composite sample without any short-circuiting to the adjacent layers. So, for example, simply inserting an electrical probe into the stack to a certain precise depth would make it possible to uniquely “address” any one of the hundreds of layers. This could ultimately lead to new kinds of complex multilayered electronics, he says.