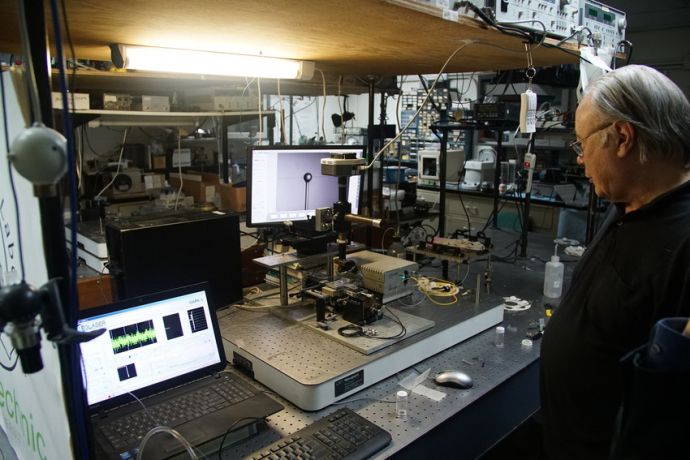 University Professor of Applied Physics Stephen Arnold and his team at the New York University Tandon School of Engineering have made a discovery that could lead to Star Trek-like biosensor devices capable of flagging the barest presence in blood of a specific virus or antibody, or protein marker for a specific cancer; or sniffing out airborne chemical warfare agents while they are still far below toxic levels.

The discovery follows years of groundbreaking work by Arnold, who in 1995 discovered that an optical fiber could excite what he termed Whispering Gallery Mode (WGM) in polymer micro-beads less than one-third the diameter of a human hair. Further discoveries and patents led to WGM biosensors capable of gauging the mass of viruses, proteins, and other nanoparticles by sending them into spacecraft-like orbit around the micro-bead, thanks to a photonic “tractor beam” caused by the resonating light (watch video). Arnold and collaborators then devised a way to make these WGM biosensors sensitive enough to identify even the smallest individual bio-particles from the RNA virus MS2 to single molecules down to 6 zepto-grams (6×10-21 grams), below the mass of all known cancer markers. Many companies, including Genalyte, employ WGM biosensors in diagnostic products that can perform dozens of bioassays in minutes.

Now, Arnold and his team at NYU Tandon’s MicroParticle PhotoPhysics Laboratory for BioPhotonics (MP3L) are the first to find a way to determine the density of charges on an area of a WGM micro-bead’s surface, as well as the charge of an ensnared nanoparticle or virus, by measuring how light frequency fluctuates as the tiny particle follows its wobbly course around the sphere. This discovery could allow researchers and manufacturers not just to identify nanoparticles, but to manipulate them.

Arnold, who also is a member of the Othmer-Jacobs Department of Chemical and Biomolecular Engineering at NYU, and his fellow researchers, including Jehovani Lopez, Eshan Treasurer, Kaitlynn Snyder, and David Keng, recently published their findings in Applied Physics Letters.

The WGM biosensor, which Arnold named for the famous Whispering Gallery in the dome of St. Paul’s Cathedral in London, is a device the size of a small smartphone comprising a tunable laser guided down a specially treated fiber optic filament with a detector at the far end of the filament measuring the light’s intensity and resonance. A tiny silica bead next to the filament diverts a portion of the light beam, which begins to resonate within the bead the way sound resonates under the dome of the church gallery for which the phenomenon is named.

“Charge controls the ability to transport particles that are interacting with cells and other objects that possess electric fields,” he said. “By determining the charge of a virus, for example, you can understand how it can be transported to the cell surface. You need to understand this mechanism in order to engineer a WGM micro-bead that has a specific antigen at a specific region of its surface so that the biosensor can attract specific pathogens or other biomolecules.”

Arnold and the MP3L team were able to extract the electrostatic force between the orbiting nanoparticle and the surface of the glass bead through experiments based on the observation that the nano-orbital phenomenon requires a near balance between the electrostatic force and the known optical tractor beam force, just as a weighing scale balances the force of a spring against your body’s weight.

“The difference in the strength of the force being measured is extraordinarily small,” said Arnold, who explained that the measured electrostatic force involved in keeping a nanoparticle in orbit was only 0.00000000000003 (3×10-14) pounds. “With this force in hand both the charge on the nanoparticle and the microcavity charge density could be calculated through a series of experiments.”

The team next plans to use the discovery to develop technology for “photonic printing,” the ability to quickly create numerous task-specific WGM biosensors, with specific molecules attached to specific areas of the micro-bead.

This research was supported by the National Science Foundation and the Air Force Office of Scientific Research.

“Whispering Gallery Mode Coulometry of the Nanoparticle-Microcavity Interaction in Aqueous Solution” is available at aip.scitation.org.