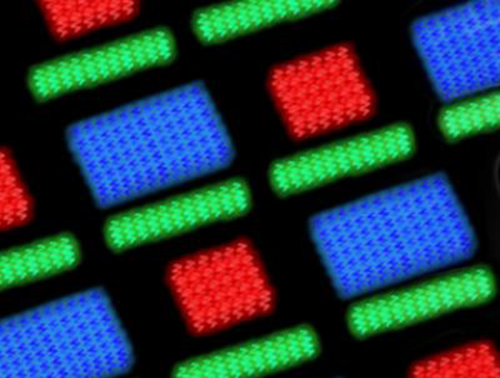 From smartphones to TVs and laptops, light emitting diode (LED) displays are ubiquitous. OLEDs (where the O denotes they are organic, or carbon-based) are among the most energy efficient of these devices, but they generally have higher production costs due to the laborious fabrication processes needed to arrange them properly. Today in ACS Central Science, researchers introduce a new way to efficiently create patterns of OLEDs.

In an LED display, the emissions from red, green and blue diodes are blended to create the white and colored light necessary to render images. It is crucially important to precisely position the different types of diodes in relation to one another. And although many fabrication methods exist, they all have limitations with regard to scalability, pattern control, or feature resolution. Solution-based protocols are attractive because they are inexpensive and well-suited to large scale manufacturing. However, current techniques do not meet the demands required for commercial OLED display technology. Zak Page, Craig Hawker and colleagues at the University of California, Santa Barbara and the Dow Chemical Company sought to overcome this barrier by adopting a bottom-up approach for patterning emissive polymers.

Starting with a substrate of indium tin oxide, the researchers used light-activated chemistry to pinpoint specific locations on the surface for polymer growth. Key to the success of this approach are designer iridium photocatalysts that serve two roles: First, as the catalyst to build the emissive brush polymers, and then as a necessary dopant for the resulting OLED arrays. The authors demonstrated the feasibility of their system by fabricating functional multi-colored OLED arrays and note that their method may enable high throughput manufacturing of OLEDs using many technologies, including inkjet printing, in the future.