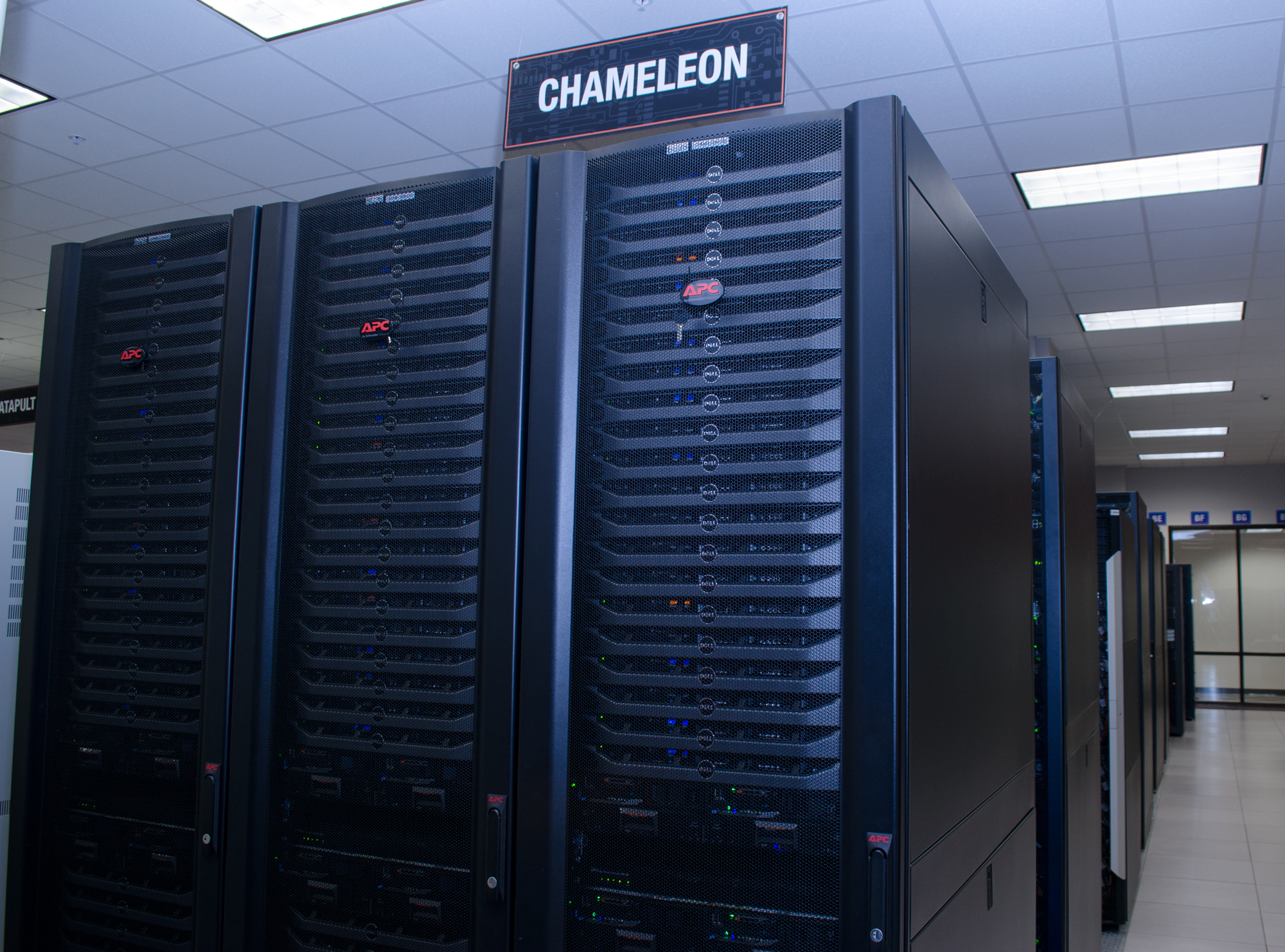 Chameleon, an experimental testbed for cloud architecture and applications supported by the National Science Foundation, is co-located at TACC and the University of Chicago. Here, hardware in TACC’s datacenter. Source: TACC

Cloud computing lies behind many of today’s most popular technologies, from streaming video and music to e-mail and chat services to storing and sharing family photos. Since 2015, the Chameleon testbed has helped researchers push the potential of cloud computing even further, finding novel scientific applications and improving security and privacy.

A new grant from the National Science Foundation will extend Chameleon’s mission for another three years, allowing the project led by University of Chicago with partners at the Texas Advanced Computing Center (TACC), Renaissance Computing Institute (RENCI), and Northwestern University to enter its next phase of cloud computing innovation. Upgrades to hardware and services as well as new features will help scientists rigorously test new cloud computing platforms and networking protocols.

The $10 million renewal will be officially announced at the inaugural Chameleon User Meeting, taking place September 13-14 at Argonne National Laboratory.

“In phase one we built a testbed, but in phase two we’re going to transform this testbed into a scientific instrument,” said Kate Keahey, Argonne computer scientist, Computation Institute fellow, and Chameleon project PI. “We’re going to extend the capabilities that allow users to keep a record of their experiments in Chameleon and provide new services that allow them to build more repeatable experiments.”

The new features build upon the project’s original philosophies of flexibility and transparency, which provided users with a large-scale, approximately 600-node cloud infrastructure with bare metal reconfiguration privileges. This unique level of access allows researchers to go beyond limited development on existing commercial or scientific clouds, offering a customizable platform to create and test entirely new cloud computing architectures.

“Chameleon allows us to reach new communities of researchers that our current systems don’t serve,” said Dan Stanzione, executive director at TACC and a co-investigator on Chameleon. “While other TACC production systems support science that makes use of large scale computing, we’ve never had a way for researchers to experiment on the computing systems themselves. Chameleon provides a platform for computer scientists and other researchers to explore techniques and tools to make cloud computing systems and future computing platforms more effective.”

Many of these projects benefited from Chameleon features that allow them to extract detailed, precise data about system performance and status during usage. To further support the conduct of reproducible science, the Chameleon team will make it even easier for scientists to gather and use this information.

Additional phase two landmarks include new hardware, including additional racks at UChicago and TACC, infusion of highly-contested resources such as GPUs, and Corsa network switches. The new Corsa switches enable experimentation with software-defined networking (SDN) within a Chameleon site as well as extending individual SDN experiments across the wide-area to include resources from either Chameleon site or even from other compatible testbeds, such as NSF’s GENI.

New hardware will be complemented by new capabilities allowing users to define entirely new classes of experiments. For the second phase, new team members from RENCI with significant expertise developing such capabilities will join the existing Chameleon team based at UChicago, TACC, and Northwestern University.

On the software side, the Chameleon team will package CHI (CHameleon Infrastructure), the software operating Chameleon, based primarily on the open-source OpenStack project to which the University of Chicago team made substantial contributions. Packaging the Chameleon operational model will allow others to create their own experimental clouds easily.

The project will also look to expand their community through outreach events, including workshops, online tutorials, and September’s user meeting. In addition to training scientists in the use of Chameleon and gathering feedback for future improvements, these events will also be an opportunity for defining the future of cloud computing science.