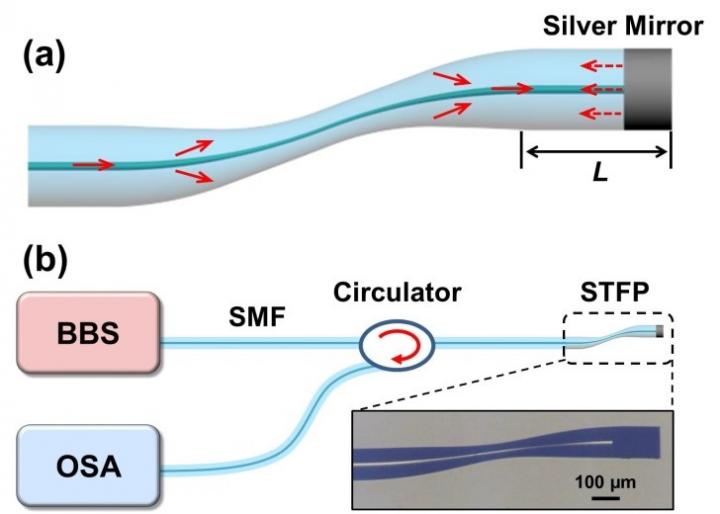 Researchers designed a new sensor (a), based on an S-tapered fiber probe (STFP), that can be used for high sensitivity refractive-index measurement. When light from a broadband source (BBS) enters the fiber’s tapered area, a portion of the light interacts with the surrounding sample in a way that shifts the light’s spectrum (b). This altered light is reflected back through the fiber to an optical spectrum analyzer (OSA) that monitors and records the change in spectrum, providing information about the chemistry of the sample.

Researchers have developed a new flexible sensor with high sensitivity that is designed to perform variety of chemical and biological analyses in very small spaces. The sensor’s small size means that it could potentially be used inside blood vessels. With additional development, the sensor might be used to detect specific chemicals, DNA molecules or viruses.

“Our new fiber sensor has a simple structure and is inexpensive to make while being small enough for highly sensitive measurement in narrow areas,” said Chao Chen, a member of the research team from the Changchun Institute of Optics, Fine Mechanics and Physics, Chinese Academy of Sciences, China. “In the future, it could be used for chemical and biological sensing in a variety of applications.”

The new sensor consists of a 1-millimeter long portion of the end of an optical fiber that narrows and is bent into a configuration called an S taper. By detecting changes in an optical property known as refractive index, the device can sense concentration, pH and other chemical parameters.

In the journal Optical Materials Express, the researchers show that their sensor design is nine times more sensitive than other tapered fiber refractive index sensors. They also demonstrate that the device’s measurements are not affected by temperature changes, which helps ensure accurate analysis.

“The tiny sensor could potentially be used at refineries to detect leaks that might lead to a fire or explosion,” said Chen. “The device is sensitive and requires very little sample for analysis, characteristics that could make it useful for detecting contaminants in food, for example.”

To operate the sensor, the researchers send white light from a special supercontinuum source through the fiber. When the light enters the fiber’s tapered area, a portion of it escapes and interacts with the surrounding sample in a way that shifts the light’s spectrum. This altered light hits a silver mirror at the end of the fiber and is reflected back through the fiber to an optical spectrum analyzer that monitors and records the change in spectrum. The spectral shifts can be used to determine the sample’s chemical properties.

The new sensor improves upon one the researchers previously developed that also featured an S taper for refractive index sensing. To make it more useful for narrow or limited spaces, they designed the new sensor to use reflected light rather than light that transmits through the sample. This change made the device’s measurements less sensitive to small bends that the fiber might experience when inserted into a sample. The S-shaped taper also makes the sensing portion of the fiber smaller than other reflection refractive index sensors based on tapered fibers, which are too long to form a compact probe.

To test the new sensor design, the researchers immersed it in various concentrations of glycerin-water solutions at room temperature. By monitoring the shift of the reflection spectra, the researchers demonstrated that the sensor was highly sensitive to refractive index changes in the surrounding solution. When they heated the sensor from room temperature to 100 degrees Celsius in increments of 10 degrees, the reflection spectrum of the sensor changed very little. This showed that temperature changes do not affect the accuracy of the sensor.

Next, the researchers plan to test whether making the fiber taper even narrower might further increase the sensor’s sensitivity. They also want to make a version of the sensor with functionalized material on the fiber surface that would bind to specific molecules, allowing the sensor to detect the presence of DNA or viruses, for example.