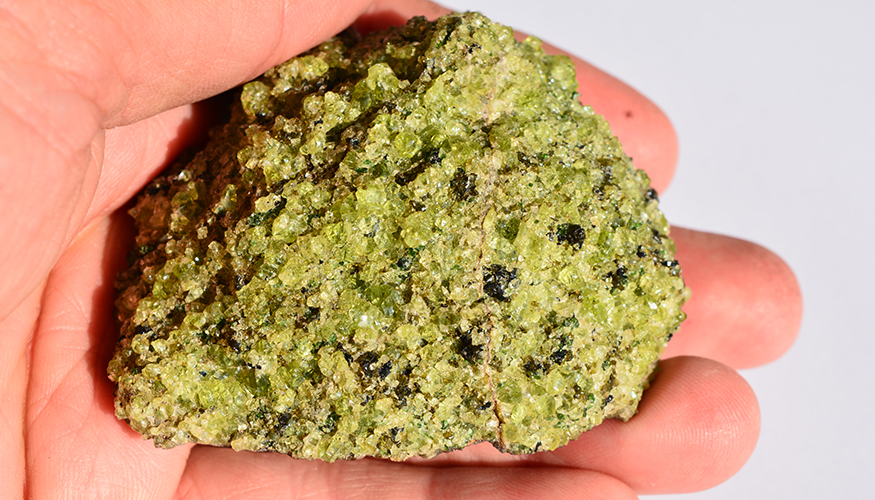 A mantle nodule collected from San Carlos, Arizona, brought to the surface during a deep volcanic eruption about 1 million years ago. Olivine, which is the focus of the LLNL study, is the predominant light green-colored mineral that is present in this rock. Photo by Wyatt Du Frane/LLNL.

New work by Lawrence Livermore National Laboratory (LLNL) scientists shows the dispersal of water (incorporated as hydrogen in olivine, the most abundant mineral in the upper mantle), could account for high electrical conductivity seen in the asthenosphere (part of the upper mantle just below the lithosphere that is involved in plate tectonic movement). The research appears in Nature Scientific Reports(link is external).

The work could lead to a better understanding of present day water distribution in the mantle, which has strong implications for planetary dynamics and evolution. Researchers said such information might provide key evidence as to why Earth is the only known planetary body in our solar system to develop plate tectonics and to retain liquid water oceans on its surface.

“We approached the problem from a different perspective, using new hydrogen diffusion measurements to infer what the contribution of hydrogen would be to electrical conductivity,” said LLNL’s Wyatt Du Frane, the principal investigator on the project. “Our experiments on olivine indicated a larger temperature dependence than previously thought to occur for this phenomenon. The contribution of hydrogen to electrical conductivity, while modest at lower temperatures, becomes quite large at the temperatures expected to occur in the mantle.”

Minerals formed deep in the mantle and transported to the Earth’s surface contain tens to hundreds of parts per million in weight (ppm wt) of water, providing evidence for the presence of dissolved water in the Earth’s interior. Even at these low concentrations, water greatly affects the physico-chemical properties of mantle materials. The diffusion of hydrogen controls the transport of water in the Earth’s upper mantle, but until now was not fully understood for olivine.

Earth’s hydrosphere is a distinctive feature of our planet where massive oceans affect its climate and support its ecosystem. The distribution of water on Earth is not limited to its outermost shell (hydrosphere and hydrated minerals), but extends to great depths within the planet. Downwelling oceanic lithosphere (at subduction zones) and upwelling magmas (at mid ocean ridges, volcanoes and hotspots) are vehicles for transport of H2O between the surface and the Earth’s deep interior.

“The amount of hydrogen required to match geophysical measurements of electrical conductivity inside Earth are in line with the concentrations that are observed in oceanic basalts. This demonstrates that geophysical measurements of electrical conductivity are a promising tool for mapping out water distributions deep inside the Earth,” Du Frane said.