NASA’s Mars Curiosity rover has conducted the first test of a new drilling technique on the Red Planet since its drill stopped working reliably.

This early test produced a hole about a half-inch (1-centimeter) deep at a target called Lake Orcadie — not enough for a full scientific sample, but enough to validate that the new method works mechanically. This was just the first in what will be a series of tests to determine how well the new drill method can collect samples. If this drill had achieved sufficient depth to collect a sample, the team would have begun testing a new sample delivery process, ultimately delivering to instruments inside the rover.

The drill is used for pulverizing rock samples into powder, which are then deposited into two of Curiosity’s laboratory instruments, Sample Analysis at Mars, or SAM, and Chemistry and Mineralogy, or CheMin. Curiosity has used its drill to collect samples 15 times since landing in 2012. Then, in December 2016, a key part of the drill stopped working. The drill was designed to use two finger-like stabilizers to steady itself against rock; a faulty motor prevented the drill bit from extending and retracting between these stabilizers.

After months of effort, Curiosity’s engineering team was able to extend the drill all the way out past the stabilizers, but the motor issue persisted. The team posed a challenge for themselves: could they hack the space robot’s drill so that it didn’t require stabilizers?

Images of a new hole on upper Vera Rubin Ridge, Curiosity’s current location, suggest this “MacGyvering” is paying off. By leaving the drill in an extended position, engineers were able to practice this freehand drilling for months during testing here on Earth. This hole at Lake Orcadie provides the first insights into how this operation will work in the Martian environment.

If the previous method was like a drill press, holding the bit steady as it extends into a surface, it’s now more freehand. The NASA rover is using its entire arm to push the drill forward, re-centering itself while taking measurements with a force sensor. That sensor was originally included to stop the rover’s arm if it received a high-force jolt. It now offers Curiosity a vital sense of touch, preventing the drill bit from drifting sideways too much and getting stuck in rock.

“We’re now drilling on Mars more like the way you do at home,” says Steven Lee, deputyprojectmanager at NASA’s Jet Propulsion Laboratory, Pasadena, Calif. “Humans are pretty good at re-centering the drill, almost without thinking about it. Programming Curiosity to do this by itself was challenging — especially when it wasn’t designed to do that.” 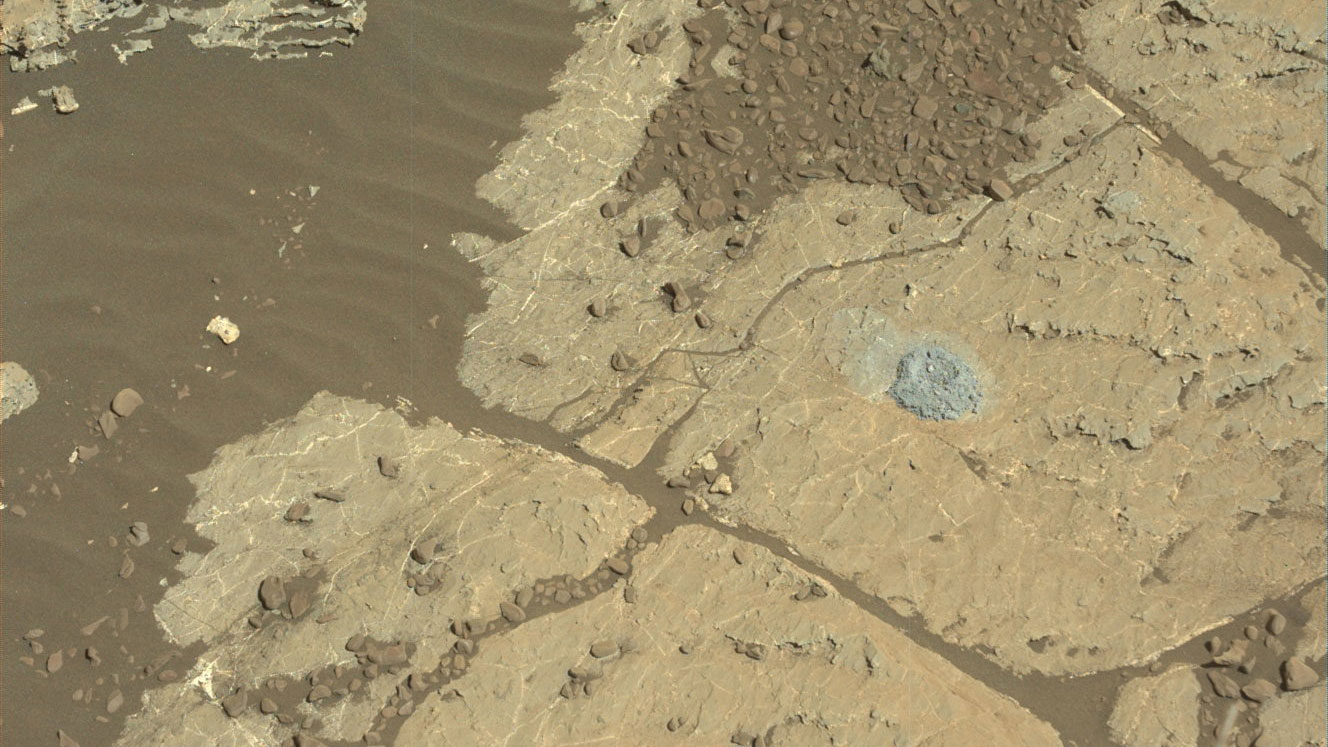 NASA’s Curiosity Mars rover used a new drill method to produce a hole on February 26 in a target named Lake Orcadie. The hole marks the first operation of the rover’s drill since a motor problem began acting up more than a year ago. Image: NASA/JPL-Caltech/MSSS

It hasn’t been easy. JPL engineers spent many double-shifts testing the new method, including on weekends and holidays. They also had to perform “invasive surgery” on their testbed — a near-exact replica of Curiosity — installing a force sensor to match the one on Mars. The Earth-based testbed’s sensor had stopped working before Curiosity’s launch in 2012, but there had never been reason to replace it before now.

“This is a really good sign for the new drilling method,” says Doug Klein of JPL, one of Curiosity’s sampling engineers. “Next, we have to drill a full-depth hole and demonstrate our new techniques for delivering the sample to Curiosity’s two onboard labs.”

Leaving the drill in its extended position means it no longer has access to a device that sieves, portions and delivers the rock powder to the rover’s instruments (called Collection and Handling for In-Situ Martian Rock Analysis, or CHIMRA).

JPL also had to invent a new way to deposit the powder without this device. The new solution makes Curiosity look as though it is adding seasoning to its science, shaking out grains from the drill’s bit as if it were tapping salt from a shaker.

This tapping has been successfully tested here on Earth —  but Earth’s atmosphere and gravity are very different from that of Mars. Whether rock powder on Mars will fall out in the same volume and in a controlled way has yet to be seen.

In the days ahead, Curiosity’s engineers will evaluate the results of this recent test and likely drill again nearby. If enough sample is collected, they will test portioning the sample out, using the rover’s Mastcam to estimate how much powder can be shaken from the drill bit.

Though this first test of the drill didn’t produce a full sample, Curiosity’s science team is excited to see this step on the path back to routine drilling. There’s high interest in getting multiple drilled samples from Vera Rubin Ridge, especially from the upper ridge that contains both gray and red rocks. The latter are rich in hematite, an iron oxide mineral that forms in the presence of water. Drilled samples might shed light on the origin of the ridge and the history of its interaction with water.

The Mars Science Laboratory, as Curiosity is formally known, was fully integrated and tested in the High Bay 1 cleanroom at the Jet Propulsion Laboratory. The Spacecraft Assembly Facility is a Class 10,000 ISO 7 cleanroom with horizontal airflow and return.