Experimental atomic clocks at the National Institute of Standards and Technology (NIST) have achieved three new performance records, now ticking precisely enough to not only improve timekeeping and navigation, but also detect faint signals from gravity, the early universe and perhaps even dark matter.

Published online in the journal Nature, the new NIST clock records are:

“Systematic uncertainty, stability, and reproducibility can be considered the ‘royal flush’ of performance for these clocks,” project leader Andrew Ludlow says. “The agreement of the two clocks at this unprecedented level, which we call reproducibility, is perhaps the single most important result, because it essentially requires and substantiates the other two results.”

“This is especially true because the demonstrated reproducibility shows that the clocks’ total error drops below our general ability to account for gravity’s effect on time here on Earth. Hence, as we envision clocks like these being used around the country or world, their relative performance would be, for the first time, limited by Earth’s gravitational effects.” 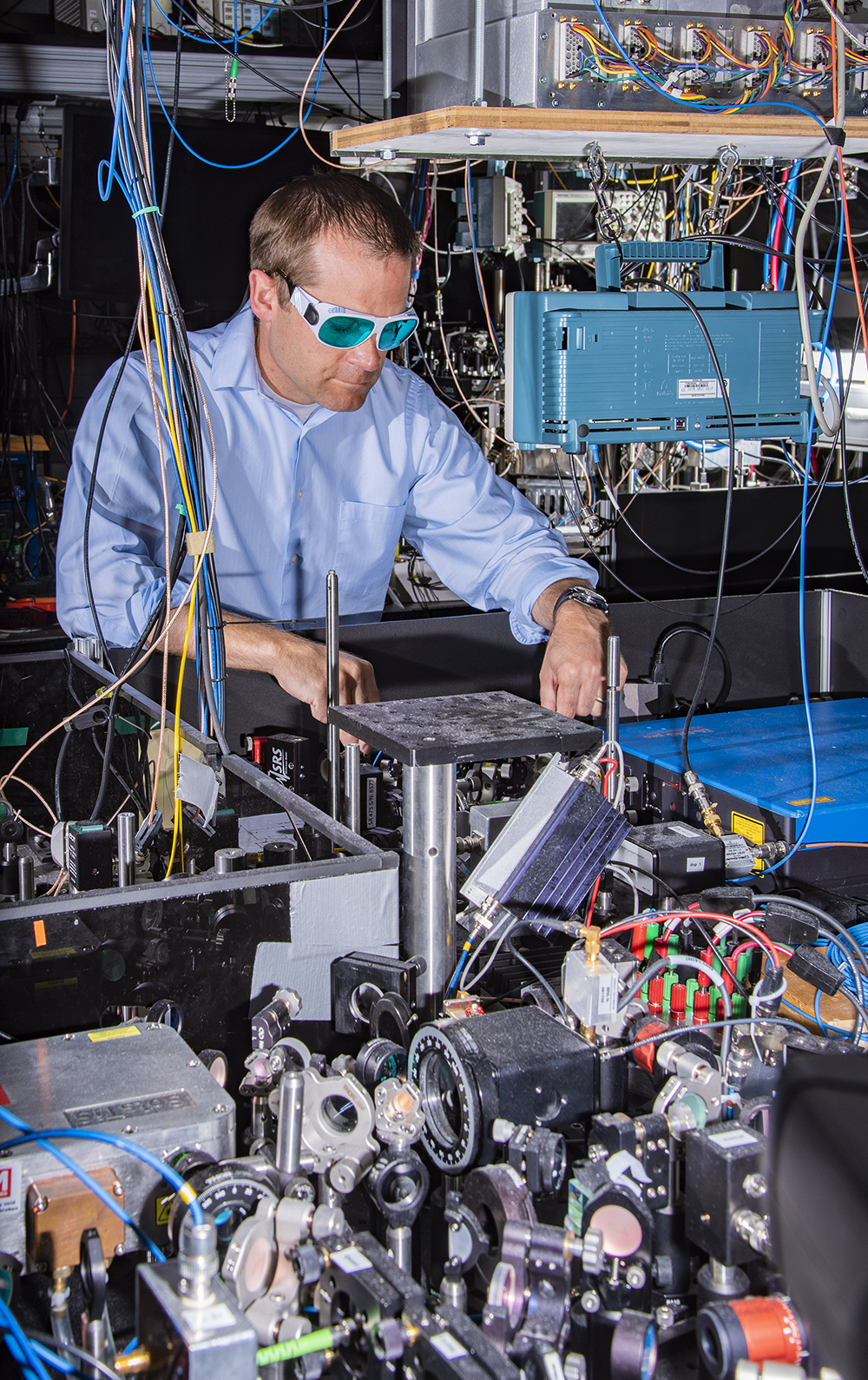 NIST physicist Andrew Ludlow and colleagues achieved new atomic clock performance records in a comparison of two ytterbium optical lattice clocks. Laser systems used in both clocks are visible in the foreground, and the main apparatus for one of the clocks is located behind Ludlow. Image: Burrus/NIST

Einstein’s theory of relativity predicts that an atomic clock’s ticking, that is, the frequency of the atoms’ vibrations, is reduced — shifted toward the red end of the electromagnetic spectrum — when observed in stronger gravity. That is, time passes more slowly at lower elevations.

While these so-called redshifts degrade a clock’s timekeeping, this same sensitivity can be turned on its head to exquisitely measure gravity. Super-sensitive clocks can map the gravitational distortion of space-time more precisely than ever. Applications include relativistic geodesy, which measures the Earth’s gravitational shape, and detecting signals from the early universe such as gravitational waves and perhaps even as-yet-unexplained dark matter.

NIST’s ytterbium clocks now exceed the conventional capability to measure the geoid, or the shape of the Earth based on tidal gauge surveys of sea level. Comparisons of such clocks located far apart such as on different continents could resolve geodetic measurements to within 1 centimeter, better than the current state of the art of several centimeters.

In the past decade of new clock performance records announced by NIST and other labs around the world, this latest paper showcases reproducibility at a high level, the researchers say. Furthermore, the comparison of two clocks is the traditional method of evaluating performance.

Among the improvements in NIST’s latest ytterbium clocks was the inclusion of thermal and electric shielding, which surround the atoms to protect them from stray electric fields and enable researchers to better characterize and correct for frequency shifts caused by heat radiation.

The ytterbium atom is among potential candidates for the future redefinition of the second — the international unit of time — in terms of optical frequencies. NIST’s new clock records meet one of the international redefinition roadmap’s requirements, a 100-fold improvement in validated accuracy over the best clocks based on the current standard, the cesium atom, which vibrates at lower microwave frequencies.

NIST is building a portable ytterbium lattice clock with state-of-the-art performance that could be transported to other labs around the world for clock comparisons and to other locations to explore relativistic geodesy techniques.

The work is supported by NIST, the National Aeronautics and Space Administration, and the Defense Advanced Research Projects Agency.