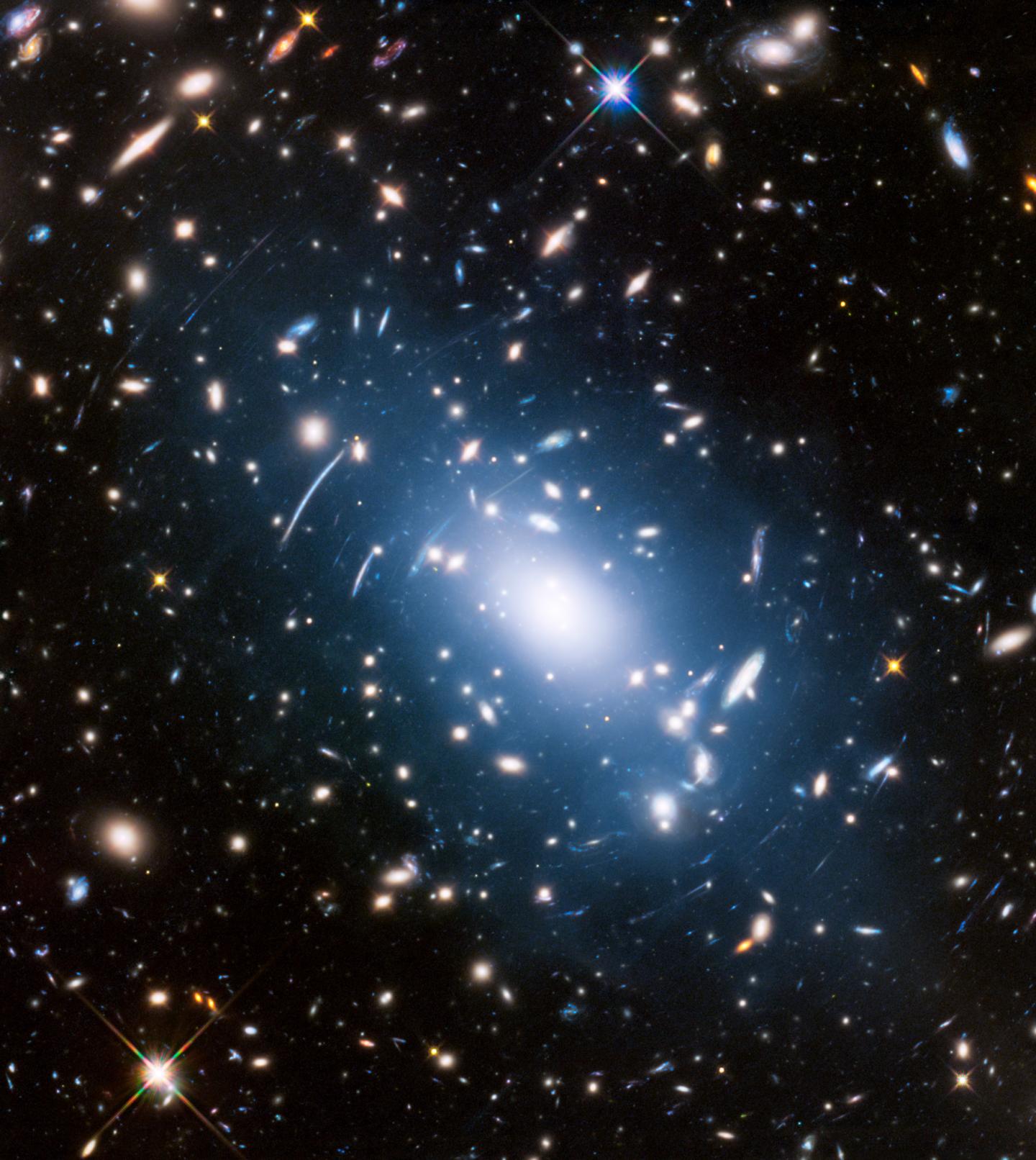 Hubble’s powerful sensitivity and resolution captures a soft blue haze, called intracluster light, among innumerable galaxies in the Abell S1063 cluster. The stars producing this glow have been thrown out from their galaxies. These stars now live solitary lives, no longer part of a galaxy but aligning themselves with the gravity of the overall cluster. Astronomers have found that intracluster light’s association with a map of mass distribution in the cluster’s overall gravitational field makes it a good indicator of how invisible dark matter is distributed in the cluster. Credit: NASA, ESA and M. Montes (University of New South Wales)

A new look at Hubble images of galaxies could be a step toward illuminating the elusive nature of dark matter, the unobservable material that makes up the majority of the universe, according to a study published online today in the Monthly Notices of the Royal Astronomical Society.

Utilizing Hubble’s past observations of six massive galaxy clusters in the Frontier Fields program, astronomers demonstrated that intracluster light — the diffuse glow between galaxies in a cluster — traces the path of dark matter, illuminating its distribution more accurately than existing methods that observe X-ray light.

Intracluster light is the byproduct of interactions between galaxies that disrupt their structures; in the chaos, individual stars are thrown free of their gravitational moorings in their home galaxy to realign themselves with the gravity map of the overall cluster. This is also where the vast majority of dark matter resides. X-ray light indicates where groups of galaxies are colliding, but not the underlying structure of the cluster. This makes it a less precise tracer of dark matter.

“The reason that intracluster light is such an excellent tracer of dark matter in a galaxy cluster is that both the dark matter and these stars forming the intracluster light are free-floating on the gravitational potential of the cluster itself — so they are following exactly the same gravity,” said Mireia Montes of the University of New South Wales in Sydney, Australia, who is co-author of the study. “We have found a new way to see the location where the dark matter should be, because you are tracing exactly the same gravitational potential. We can illuminate, with a very faint glow, the position of dark matter.”

Montes also highlights that not only is the method accurate, but it is more efficient in that it utilizes only deep imaging, rather than the more complex, time-intensive techniques of spectroscopy. This means more clusters and objects in space can be studied in less time — meaning more potential evidence of what dark matter consists of and how it behaves.

“This method puts us in the position to characterize, in a statistical way, the ultimate nature of dark matter,” Montes said.

“The idea for the study was sparked while looking at the pristine Hubble Frontier Field images,” said study co-author Ignacio Trujillo of the Canary Islands Institute of Astronomy in Tenerife, Spain, who along with Montes had studied intracluster light for years. “The Hubble Frontier Fields showed intracluster light in unprecedented clarity. The images were inspiring,” Trujillo said. “Still, I did not expect the results to be so precise. The implications for future space-based research are very exciting.”

“The astronomers used the Modified Hausdorff Distance (MHD), a metric used in shape matching, to measure the similarities between the contours of the intracluster light and the contours of the different mass maps of the clusters, which are provided as part of the data from the Hubble Frontier Fields project, housed in the Mikulski Archive for Space Telescopes (MAST). The MHD is a measure of how far two subsets are from each other. The smaller the value of MHD, the more similar the two point sets are. This analysis showed that the intracluster light distribution seen in the Hubble Frontier Fields images matched the mass distribution of the six galaxy clusters better than did X-ray emission, as derived from archived observations from Chandra X-ray Observatory’s Advanced CCD Imaging Spectrometer (ACIS).

Beyond this initial study, Montes and Trujillo see multiple opportunities to expand their research. To start, they would like to increase the radius of observation in the original six clusters, to see if the degree of tracing accuracy holds up. Another important test of their method will be observation and analysis of additional galaxy clusters by more research teams, to add to the data set and confirm their findings.

The astronomers also look forward to the application of the same techniques with future powerful space-based telescopes like the James Webb Space Telescope and WFIRST, which will have even more sensitive instruments for resolving faint intracluster light in the distant universe.

Trujillo would like to test scaling down the method from massive galaxy clusters to single galaxies. “It would be fantastic to do this at galactic scales, for example exploring the stellar halos. In principal the same idea should work; the stars that surround the galaxy as a result of the merging activity should also be following the gravitational potential of the galaxy, illuminating the location and distribution of dark matter.”

The Hubble Frontier Fields program was a deep imaging initiative designed to utilize the natural magnifying glass of galaxy clusters’ gravity to see the extremely distant galaxies beyond them, and thereby gain insight into the early (distant) universe and the evolution of galaxies since that time. In that study the diffuse intracluster light was an annoyance, partially obscuring the distant galaxies beyond. However, that faint glow could end up shedding significant light on one of astronomy’s great mysteries: the nature of dark matter.