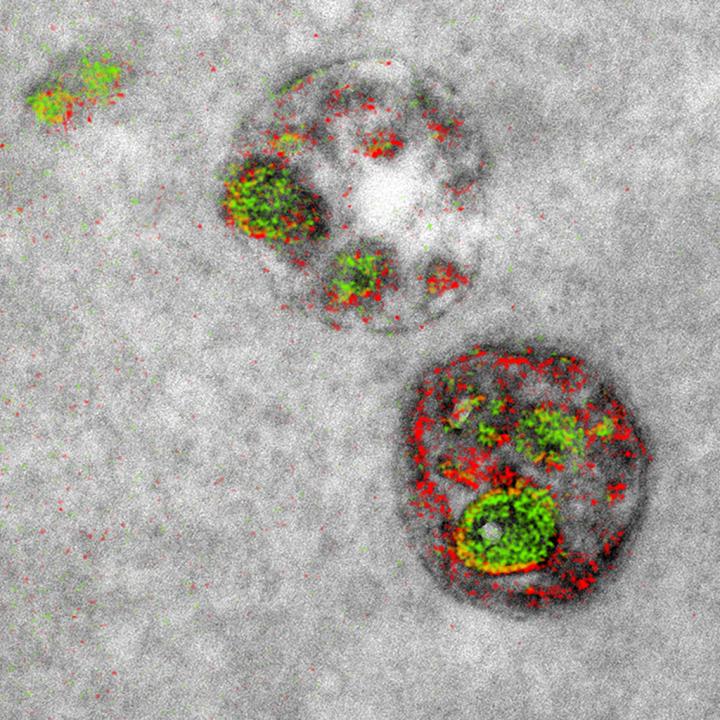 The best microscope we have for peering inside of a cell can now produce color images. University of California, San Diego, scientists demonstrate this advancement in electron microscopy — of the ability to magnify objects up to ten million times — with photographs of cellular membranes and the synaptic connections between brain cells. The development of multicolor electron microscopy, presented November 3 in Cell Chemical Biology, was jointly overseen by Mark Ellisman and the late Roger Tsien, a 2008 Chemistry Nobel Prize laureate and visionary for cellular imaging who died unexpectedly over the summer.

With their new method, which the research team worked on for nearly 15 years, up to three colors at a time (green, red, or yellow) can be used in an image. A detector on the microscope captures electrons lost from metal ions painted over the specimen and records the metal’s energy loss signature as a color. A technician must add the ionized metals one at a time and then lay the full color map over the still microscopy image.

“It’s a bit like when you first see a color photograph after having only known black and white — for the last 50 years or so, we’ve been so used to monochrome electron micrographs that it’s now hard to imagine that we could go back,” says first author Stephen Adams, a UCSD chemist. “This method has many potential applications in biology; in the paper, we demonstrate how it can distinguish cellular compartments or track proteins and tag cells.”

For the multicolor effect to work, the researchers needed metal complexes that are stable enough to withstand application (meaning they don’t quickly deteriorate and blur the image) and have a distinct electron energy loss signature. The researchers used ionized lanthanum (La), cerium (Ce), and praseodymium (Pr) — all metals in the lanthanide family — with each metal complex laid down sequentially as a precipitate onto the specimen as it sits in the microscope.

“One challenge that kept us from publishing this much earlier, because we had the chemistry and we had an instrument that worked about 4 years ago, was we needed a way to deposit the metal compounds sequentially,” says co-senior author Mark Ellisman, director of the National Center for Microscopy and Imaging Research at UCSD. “We spent an awful lot of time trying to figure out how to deposit one of the lanthanides and then clear it so that it didn’t react when we deposited a second signal on the first site.”

Once the application process had been established, the research team illustrated the power of multicolor electron microscopy by visualizing two brain cells sharing a single synapse. They also show peptides entering through a cell membrane. The new method is analogous to fluorescence microscopy–a tool that detects colored light emitted from glowing proteins tagged in a biological specimen–but benefits from the details that can only be captured by electron microscopy.

Notably, this paper is one of the last that Roger Tsien, who won a 2008 Nobel Prize in Chemistry for the discovery and application of green fluorescent protein to biochemical imaging, saw accepted by a journal before his death last August. He did the first experiments to develop the chemical compounds needed for the multicolor imaging method nearly 15 years ago. As a Christmas present to himself, he would spend 2 weeks at the bench, and this was one of his holiday projects.

“One theme that has gone through all of Roger’s work is the desire to peer more closely into the workings of the cell,” Adams says. “With all of the fluorescence techniques that he’s introduced, he was able to do that in live cells, and make action movies of them in vivid colors. But he always wanted to look closer, and now he’s left the beginnings for a method where we can add colors to electron microscopy.”

“This is clearly an example of Roger’s brilliance at chemistry and how he saw that if we could do this, we would be able to enjoy the advantages of electron microscopy,” adds Ellisman, a longtime collaborator who was co-senior author with Tsien on dozens of studies. “The biggest advantage of electron microscopy that we saw is that you have weak contrasts by the nature of the way that staining works so color-specific label give context to all of the rich information in the scene of which molecules are operating.”

The researchers say there is more chemistry to be done to perfect the metal ion application process as well as produce images with three or more colors. There may also be ways to increase the amount of metal ions that can be deposited, which could help with resolution. Many in the biochemical community should be able to begin using this technique right away, as it takes advantage of tools that are already found in laboratories.