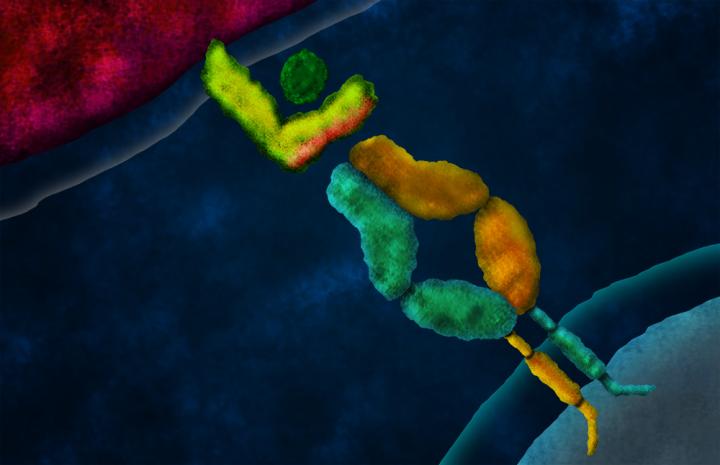 Artist’s concept of a domain-swapped T cell receptor (TCR) engaging a peptide presented by a tumor cell on a major histocompatibility complex (MHC) molecule. In TCR gene therapy, genes encoding a tumor-specific TCR are introduced to a patient’s T cells, retargeting them to attack cancer cells. Swapping the constant domains between the alpha and beta chains of the tumor-specific TCR prevents these chains from mispairing with the TCR chains resident to each T cell, which can result in deleterious autoimmunity. Despite this significant structural rearrangement, domain-swapped TCRs retain function: they assemble with CD3 proteins (not depicted), traffic to the T cell surface, mediate antigen-specific T cell responses upon binding cognate peptide-MHC, and prevent tumor growth in mice. Source: CalTech

The human body produces T cells to recognize and fight disease. Each T cell has a unique T cell receptor (or TCR) on its surface that surveils small fragments of proteins presented by other cells. Upon detecting evidence of cancer or infection, a subset of T cells binds the diseased cells and orchestrates their elimination. When tumors and infections cannot be eradicated naturally, researchers employ immunotherapies to boost the immune system’s effectiveness.

By inserting genes encoding a tumor-specific TCR into a patient’s T cells, researchers can engineer a large population of T cells to target tumor cells. This approach, called TCR gene therapy, has yielded clinical successes where conventional cancer treatments have failed. However, TCR gene therapy is not without risk. The introduced receptor can become tangled with the resident receptor in each engineered T cell, causing some of these cells to attack healthy cells. A new technique developed by Caltech researchers prevents this from happening, increasing the safety of TCR gene therapy.

The technique, called domain swapping, was developed in the laboratory of David Baltimore, president emeritus and the Robert Andrews Millikan Professor of Biology. A paper describing the findings appears in the November 8 issue of the journal eLife.

The specificity of the TCR in each T cell results from the pairing of two protein chains–called an alpha chain and a beta chain–each of which has constant domains (shared between all TCRs) and variable domains (unique to each T cell). Normally, each T cell encodes only one alpha chain and one beta chain, which pair to form a single TCR. In TCR gene therapy, the introduction of genes encoding a tumor-reactive TCR results in T cells that express two alpha chains and two beta chains, with four possible pairings. This non-physiological situation poses a risk of autoimmunity.

“As T cells are produced, the immune system ‘auditions’ them, eliminating those that react to healthy cells and selecting those with potential to recognize diseased cells,” says Michael Bethune, senior postdoctoral scholar in biology and biological engineering, and lead author on the study. “However, in T cells engineered to express a second TCR, the introduced chains can mispair with the resident chains, resulting in TCRs with unintended and unpredictable specificity. These mispaired TCRs are not auditioned by the immune system, and some will target healthy cells causing autoimmunity.” Indeed, up to 90 percent of mice administered TCR-engineered T cells develop autoimmune disease, and cultured human T cells that are engineered to express two TCRs also react with healthy cells.

The group’s solution was to generate hybrid genes encoding TCR chains with their alpha and beta constant domains swapped in a compensatory fashion. When correctly paired, these domain-swapped TCRs retain all of the domains necessary to function. Indeed, the group found that domain-swapped TCRs and unmodified TCRs both function in human T cells, and they prevented tumor growth in mice to a similar extent. However, whereas unmodified TCRs mispaired with resident TCR chains in both mouse and human T cells, and caused autoimmunity in mice, domain-swapped TCRs did not.

“Mispairing between domain-swapped chains and resident chains results in TCRs that lack domains needed for functional assembly of the TCR complex,” Bethune says. “This ensures that only correctly paired domain-swapped TCRs function at the surface of the cell.”

Finally, in collaboration with Wolfgang Uckert at the Max Delbrück Center for Molecular Medicine in Berlin, the researchers showed that domain-swapped TCRs were expressed at higher levels on the T cell surface when the resident TCR genes were silenced.

“Our paper focuses on the increased safety afforded by domain-swapping, but combining these two solutions may result in a therapy with improved safety and efficacy compared to current practice,” Bethune says.