Cemeteries are often described as an eternal resting place for the deceased, but the situation becomes more complicated as time passes and grave markers are moved or destroyed, or when graves were never marked. Once those grave locations are lost there is no easy way to find them again. The location of graves is essential in order to protect cemeteries from development, to avoid old graves when digging new graves, and to preserve the history of the community. Faced with these situations, how can we identify unmarked graves and cemetery boundaries?

Ground penetrating radar (GPR) is one tool that can be used to identify unmarked graves. GPR is a near surface geophysical method that sends electromagnetic energy into the ground through a transmitting antenna. Buried objects in the ground, including graves, can be detected by reflections that are returned through a receiving antenna. The strength of those reflections and their elapsed travel time are recorded in a computer and can then be combined to form three-dimensional blocks of data. These data sets are carefully interpreted to identify changes below the ground. In the case of graves, these changes include the subtle variations present when a grave shaft is excavated and refilled or where a coffin, casket, or shrouded deceased person has been interred.

Using GPR in cemeteries is relatively common practice, particularly in historic cemeteries where simply excavating graves is destructive to a fragile and sensitive resource. In older cemeteries there are often no records of the interments and descendant communities can no longer identify specific burial locations or the cemetery boundaries. In these cases, GPR results can be used to answer research questions about the grave locations, number of graves, spatial organization of the cemetery, or even the depth of graves. Additionally, GPR results are a valuable archival tool to create a record of the cemetery landscape.

The historic Friendship Chapel Missionary Baptist Church Cemetery in Wake Forest, North Carolina is a historically African American cemetery. This church was founded following the Civil War (circa 1867), but oral histories indicate that congregants were meeting on the grounds of the historic cemetery for Christian services in secret prior to emancipation. The age and location of the earliest burials in this cemetery are unknown, although the cemetery was likely first used in the mid-nineteenth century. Today, it is heavily wooded, dotted with the depressions created by coffins that have collapsed below the ground, has some handmade and commercially-made markers, and unmodified fieldstone markers to indicate graves.

This cemetery is an important location for the present day church members, descendants of those buried here, and the local community members who are all struggling to preserve the town’s history in the face of development. In light of these challenges, the community wanted to identify the cemetery boundaries and get an understanding of the number of people buried there using a combination of GPR to identify unmarked graves and making a map of the existing grave markers.

The cemetery is situated on a slope and the dense vegetation prevented complete coverage with the GPR survey.  The resulting map showed approximately 400 individual markers and indicated a complex landscape that was not easily visible (Figure 2). These markers included things that many people might not identify as grave markers, such as unmodified fieldstones placed to mark graves and depressions from collapsed graves. 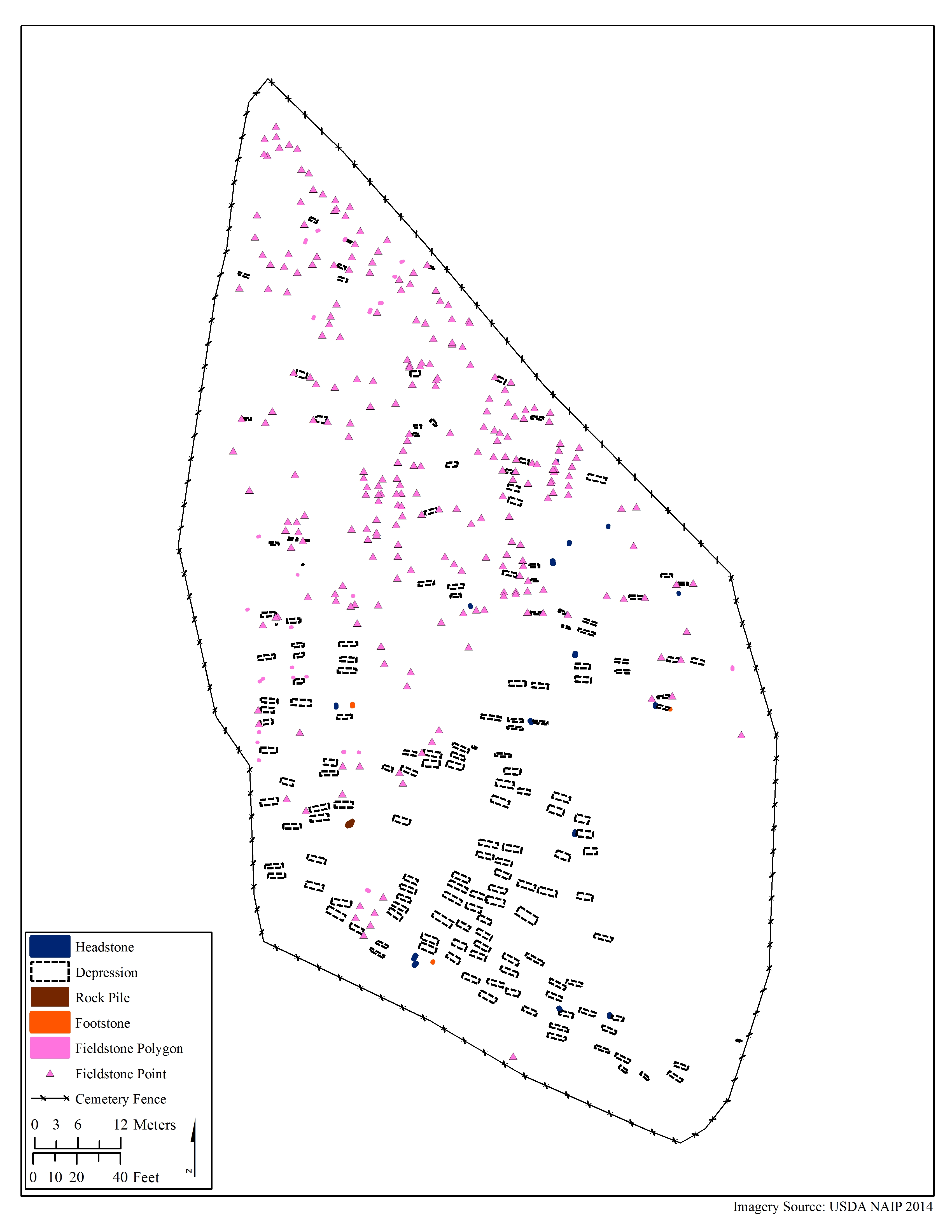 The GPR survey area covered approximately half of the 1.6 acre cemetery. The GPR data were carefully analyzed and interpreted and 277 possible graves were identified (Figure 2). Of these 277 possible graves, 167 had no marker or associated depression and they were labeled as unmarked. Each grave identified in GPR was interpreted using subtle variations in the ground from the grave (Figure 3). There were also markers visible above the ground that did not have associated GPR anomalies, which may be the result of markers that have been displaced or moved away from their original locations. Another possibility is that the buried remains may not have sufficient contrast to be visible in the GPR results as they take on the characteristics of the soils around them as they decompose.

In addition to the individual graves identified in the cemetery, a larger area of disturbed soil was identified using the GPR results (Figure 4). This was hypothesized to be a mass grave where victims of the Spanish Influenza were interred in 1918 and 1919. This hypothesis was partially validated by oral histories that suggest that there was a mass interment from this period.

When the number of individuals indicated by markers is combined with the number of unmarked graves identified in the GPR data, 567 individuals are estimated to be buried in the cemetery. This number is likely low because only about half of the cemetery could be surveyed. Although this number seems large for a 1.6 acres plot of land by modern standards, this is a community cemetery from a time when African American burial options were limited by segregation. The site was used for approximately 100 years from the mid-nineteenth century through the mid-twentieth century and should have a high density of graves. Although it is not currently in use, the cemetery remains an important place for descendants and community members today.

Cemeteries are historical landscapes that can’t be protected behind alarms and locked doors. At the Friendship Chapel Missionary Baptist Church Cemetery, both the natural elements and nearby development are degrading this important historic resource. The results of the GPR survey and mapping help to identify the grave locations onsite and make a record of the markers present. The entire project culminated in the creation of a website to make the results of the project available to the community (https://arcg.is/jr1b9).

This project was funded by the Wake Forest Historical Association through a grant from the Jandy Ammons Foundation.