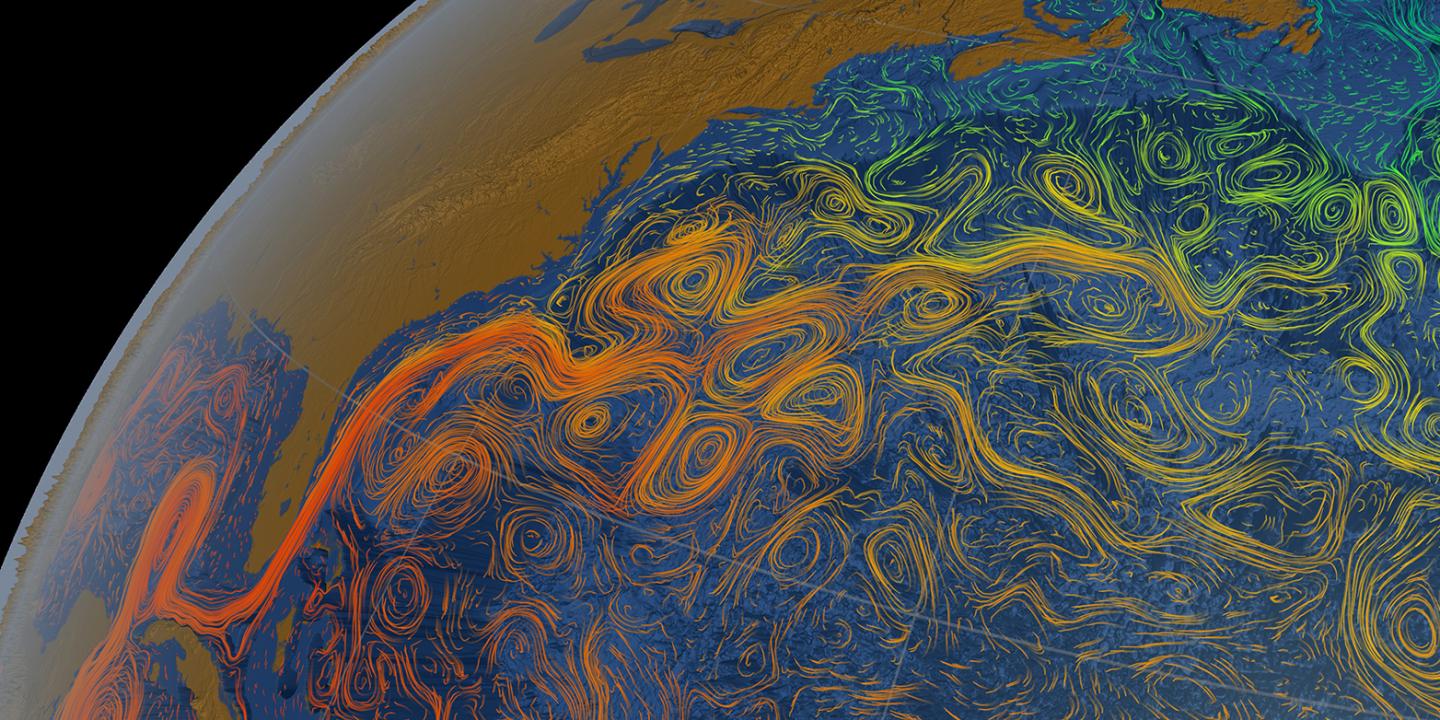 Minuscule sea creatures like cyanobacteria need large amounts of trace elements such as zinc and iron. In the world’s oceans, however, the latter is often in short supply. This is true of large stretches of the North Atlantic, especially the large North Atlantic Gyre between North America, the Canary Islands, the Caribbean and the Gulf Stream.

Up until now, researchers have usually assumed that dust from the Sahara was the only significant source of iron to the North Atlantic Gyre. Now ETH geochemists Tim Conway and Gregory de Souza have discovered another source: cold, iron-rich seawater from the North American continental slope, which is captured by meanders of the Gulf Stream and carried out to the North Atlantic Gyre. Their study was recently published in the journal Nature Geoscience.

Eddies on the surface

These “water pockets” are visible at the ocean’s surface as circular eddies, the largest of which have a diameter of 200 kilometres. Beneath them are cylinder-shaped columns that reach down to 1,000 metres, rotating anticlockwise on their own axes. They last for about two years, during which time their rotation slows as they mix with the water of the North Atlantic Gyre and enrich it with iron. Some of the water columns return to be reabsorbed by the Gulf Stream.

“The amount of iron from this source is probably of the same order of magnitude as that delivered by Saharan dust, since Gulf Stream eddies are constantly forming, while dust storms are usually just brief events,” says de Souza, Senior Assistant at the Institute of Geochemistry and Petrology at ETH Zurich.

de Souza and former postdoc Conway (now Professor at the University of South Florida) found the iron-carrying Gulf Stream eddies serendipitously. Purely out of curiosity, the two researchers examined some recently published data that had been gathered during a research cruise from the North American coast to Bermuda. This data included the concentrations of iron and zinc dissolved in seawater from the surface to the ocean floor.

At one location close to the Gulf Stream, the ETH researchers noticed elevated iron concentrations inear the surface of the otherwise iron-poor North Atlantic Gyre, reaching values similar to those of coastal water. They realised that the research vessel had, entirely by chance, sampled a Gulf Stream eddy transporting iron into the nutrient-poor waters of the North Atlantic.

To more precisely assess and calculate how much iron is delivered in this way, the ETH researchers contacted their colleague Jaime Palter, Professor at the University of Rhode Island and an ocean circulation specialist. Gregory de Souza explains: “Satellites the observe the height of the sea surface make it possible to recognise eddies from space. Since the water in them is denser than the surrounding ocean, the eddies form surface depressions that lie up to a metre below the rest of the ocean surface.”

From her analysis of the satellite data, Palter determined that on average, seven to eight eddies split off from the Gulf Stream every year. Based on this, the three researchers were able to estimate the amount of iron they carry, which they figure to be probably about 15 percent of the iron delivered by Saharan dust.

However, it is difficult to compare the two sources, since the data are insufficient and somewhat contradictory, as de Souza says: “Above all it isn’t clear how much iron from Saharan dust actually dissolves in seawater.” The proportion of iron delivered to the North Atlantic Gyre by the Gulf Stream eddies could just as well be anywhere from 3 to 75 percent of that from dust.

This wide range makes it impossible to more precisely pinpoint the relative contribution of iron from Gulf Stream eddies compared to that from Saharan dust. “We need data with higher spatial resolution if we are to calculate the amount of iron from the eddies more accurately,” de Souza says, “and we also need a better understanding of which parameters determine the solubility of iron in dust delivered to the ocean surface.”

Iron, zinc and other trace metals are essential to the survival of plankton and other microscopic denizens of the open ocean, such as diatoms, algae or bacteria. Cyanobacteria in particular, which are especially abundant in the North Atlantic Gyre, play a key role in the global carbon and nitrogen cycle. They can photosynthesise and fix atmospheric nitrogen, which means they stimulate productivity in the ocean. However, to efficiently fix nitrogen, they require large amounts of iron.

When ocean circulation patterns change, the distributions of trace elements and nutrients change as well. “That’s why it’s important for us to know where the iron, zinc and other metals are coming from,” says de Souza. He acknowledges that climate change could impact the paths of major ocean currents: “At present, we don’t know enough to be able to predict what effect this could have on trace metals, and thus on productivity in the oceans.”