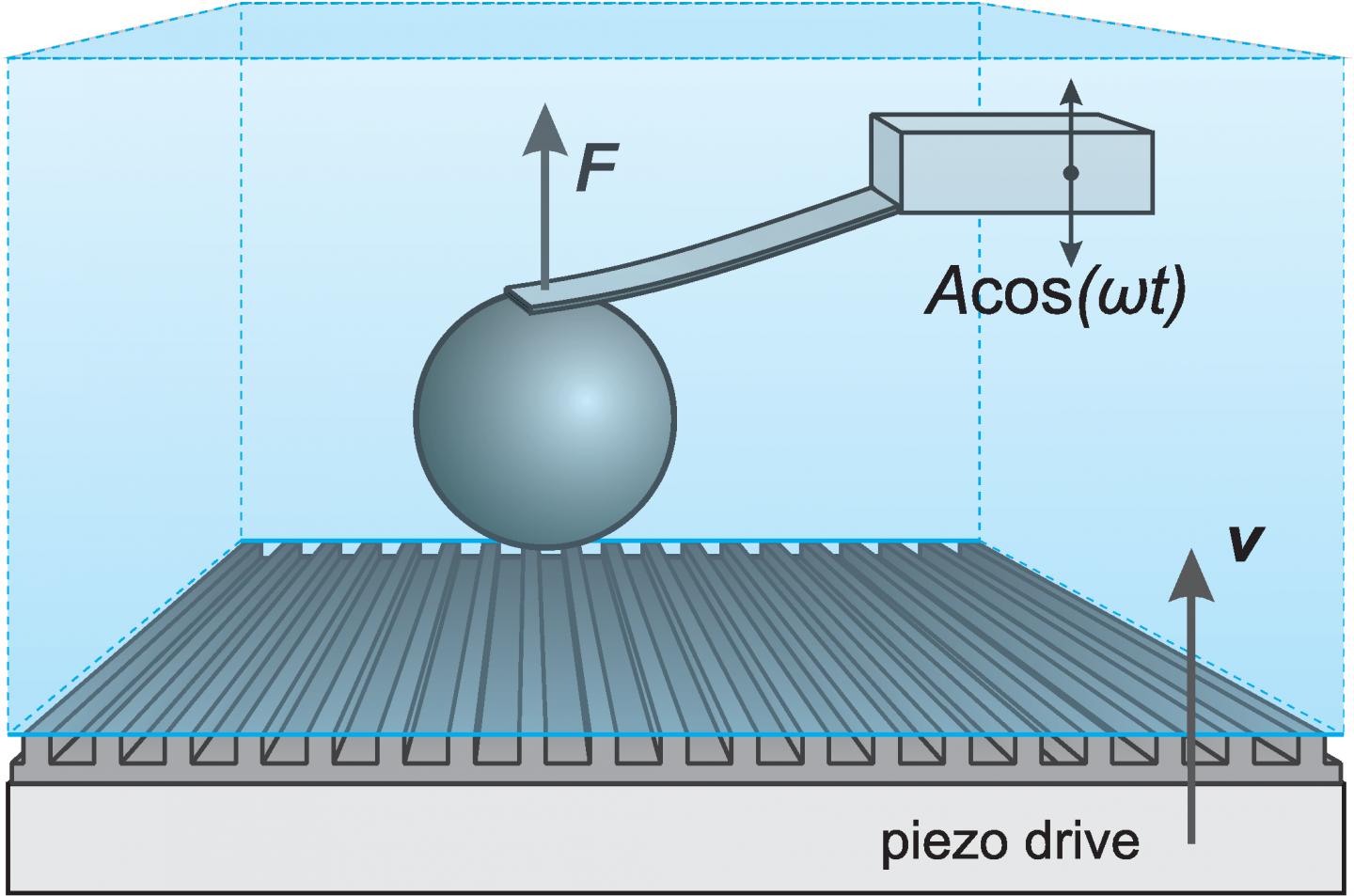 A microsphere attached to the tip of an atomic-force microscope is moving towards the superhydrophobic surface. Due to the unusual texture the viscous response of the water in this system is very different from that of a normal flat wall. Source: Taras Molotilin

Water (and other liquids) has an unusual property when it flows closely to some specially designed surfaces: its speed isn’t equal to zero even in the layer that directly touches the wall. This means that liquid doesn’t adhere to the surface, but instead slides along it. Such an effect is called hydrodynamic slip and it was first described more than 200 years ago. However, at that time it hasn’t received much attention as it didn’t significantly influence the cumulative liquid flow.

But the situation has totally changed after superhydrophobic materials were invented, where chemical hydrophobicity met a peculiar geometry of the surface (for instance, grooves or micro-pillars). In such texture’s cavities there might be air bubbles trapped, which help the liquid to slip along the surface with almost no resistance, which has greatly increased the slip length in these systems.

Complex superhydrophobic materials immediately required new hydrodynamic theories which could describe them. Such new approaches predicted not only the decrease of viscous resistance, but also some peculiarities of liquid’s behaviour near the anisotropic surfaces (the ones that have properties dependent on direction). For instance, one finds that near the surface covered with elongated grooves that are misaligned to the main flow, the liquid could turn and spin as if by its own, without any additional leverage. This effect may lead to active mixing or separation of microparticles that are immersed into the flow.

The research team from the Lomonosov Moscow State University and Institute of Physical chemistry and Electrochemistry RAS has been working for years on theories of hydrodynamic slippage near anisotropic superhydrophobic surfaces. However, up until now these theories could only indirectly be tested in experiments. In the new work, however, due to the employment of an atomic-force microscope the scientists have managed not only to determine the slip length, but also to examine the analytic formulas that described the behavior of liquid at different distances from superhydrophobic surface.

The AFM-device allowed the researchers to move an immersed spherical microparticle towards the superhydrophobic surface at a constant speed. At the same time experimentalist could monitor the sphere’s location in a channel with a superb precision. And, besides that, the scientists measured the force that affected the sphere due to the viscous resistance of the water. Authors have obtained a theoretical solution for this process, which made possible the measurement of slip length from experimental dependence of hydrodynamic force on height above the superhydrophobic surface.

According to authors of this new research, the results will become a starting point for developing new superhydrophobic systems. Now, when there are no longer any doubts about the proposed theories’ accuracy, scientists have the opportunity to bring to life even more theoretical ideas that have been created earlier. Among those one could name particle segregation in superhydrophobic channels, systems with electroosmotic flows and many other practical applications.