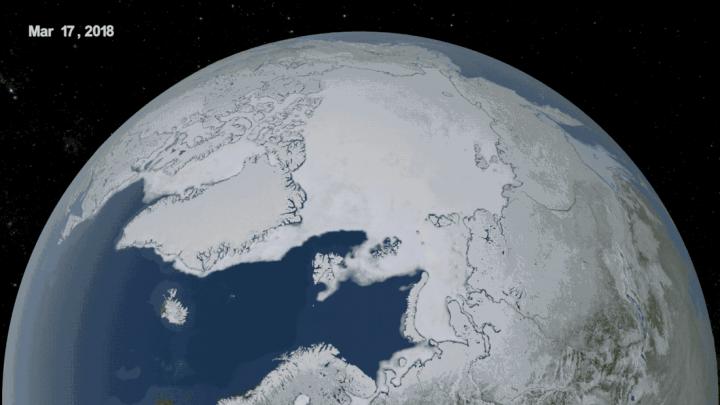 The Arctic Ocean could become ice-free in the summer in the next 20 years due to a natural, long-term warming phase in the tropical Pacific that adds to human-caused warming, according to a new study.

Computer models predict climate change will cause the Arctic to be nearly free of sea ice during the summer by the middle of this century, unless human greenhouse gas emissions are greatly reduced.

But a closer examination of long-term temperature cycles in the tropical Pacific points towards an ice-free Arctic in September, the month with the least sea ice, on the earlier side of forecasts, according to a new study in the AGU journal Geophysical Research Letters.

“The trajectory is towards becoming ice-free in the summer but there is uncertainty as to when that’s going to occur,” said James Screen, an associate professor in climate science at the University of Exeter in the U.K. and the lead author of the new study.

There are different climate models used by researchers to predict when the first ice-free Arctic September will occur. Most models project there will fewer than 1 million square kilometers of sea ice around the middle of this century, but projections of when that will occur vary within 20-year windows due to natural climate fluctuations.

The climate model used in the new study predicts an ice-free Arctic summer sometime between 2030 and 2050, if greenhouse gases continue to rise.

By accounting for a long-term warming phase in the tropical Pacific, the new research shows an ice-free Arctic is more likely to occur on the earlier side of that window, closer to 2030 than 2050.

Ocean temperatures in the Pacific always vary from month-to-month and from year-to-year, but slowly evolving ocean processes cause long-term temperature shifts lasting between 10 and 30 years. These shifts in temperature, known as the Interdecadal Pacific Oscillation (IPO), translate into an approximately 0.5 degree Celsius (0.9 degree Fahrenheit) shift in ocean surface temperature in the tropics over the 10- to 30-year cycle.

Around five years ago, the Pacific began to switch from the cold to warm phase of the IPO. Screen and his co-author plotted predictions of when an ice-free Arctic would occur in model experiments where the IPO was shifting in the same direction as the real world. They compared these to predictions where the IPO was moving in the opposite direction, that is, switching from a warm to cold phase.

Screen says these results need to be interpreted as part of a bigger picture. Human-caused climate change is the main reason for sea ice loss, so the timing of the first ice-free summer will also depend considerably on whether greenhouse gas emissions continue to rise or are curtailed. But the new results do suggest that we are more likely to see an ice-free September on the earlier side of the 20-year window of predictions.

“You can hedge your bets,” he said. “The shift in the IPO means there’s more chance of it being on the earlier end of that window than on the later end.”

Alexandra Jahn, an assistant professor in atmospheric and oceanic studies at the University of Colorado Boulder who was not involved in the new study, said the paper is very interesting and will likely inspire more research.

“The finding that we may be able to use the IPO phase to narrow the uncertainty range of over 20 years of when we may first see an ice-free Arctic Ocean in September is very promising,” she said.

Jennifer Kay, an assistant professor in environmental science at the University of Colorado Boulder who was also not involved in the new research, said the study “is an important advance in our understanding of regional Arctic sea ice loss, the chaotic nature of ice loss, and the connections between Arctic sea ice loss and extrapolar regions.”