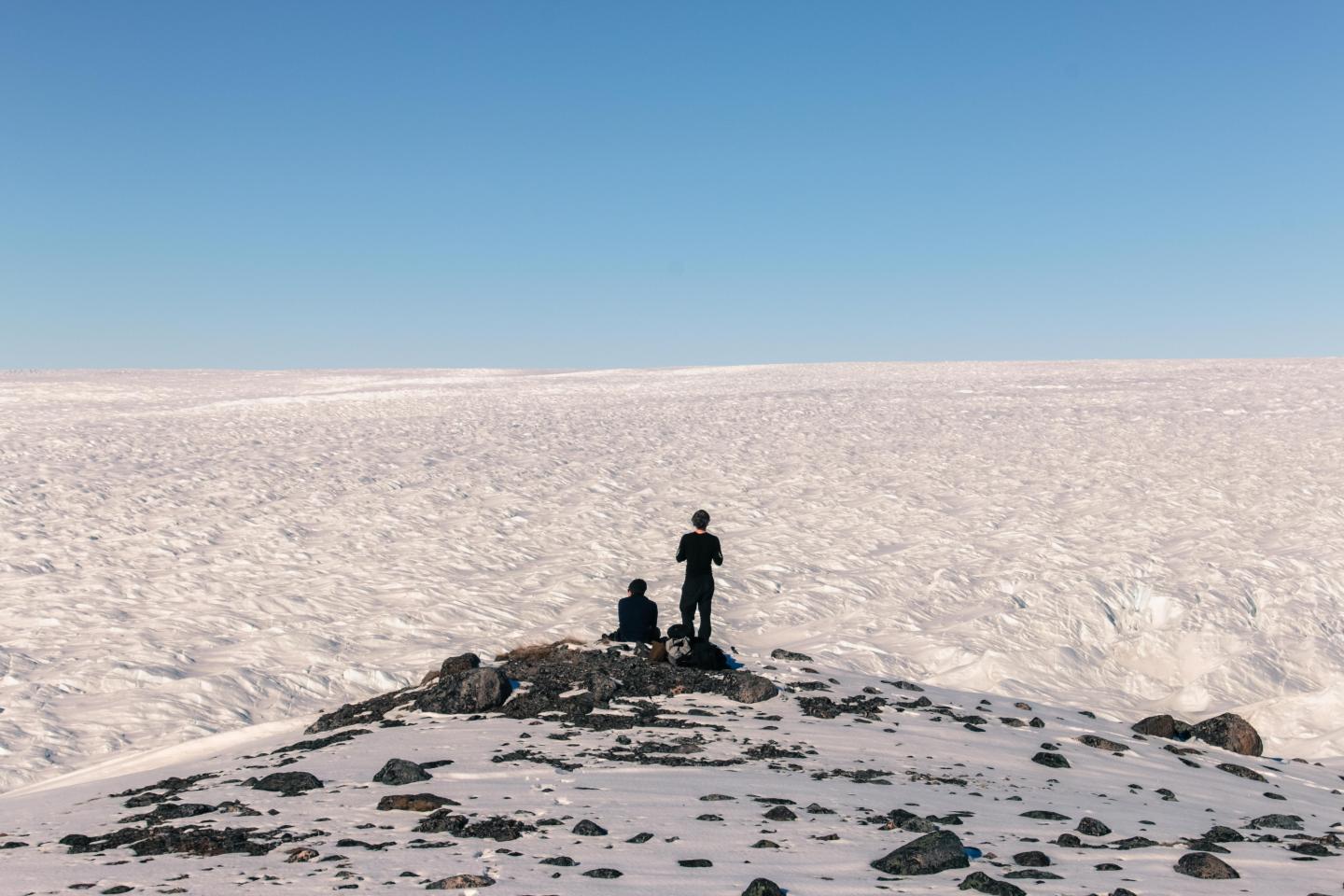 Researchers from the Bristol Glaciology Centre look over the vast Greenland Ice Sheet, which stretches beyond the horizon, during a field campaign lasting over three months in 2015. The researchers camped in a remote region of Greenland, monitoring a large meltwater river and taking samples to look at the silica concentration and isotopic signature. Credit: Dr Jon Hawkings, University of Bristol

New research led by glaciologists and isotope geochemists from the University of Bristol has found that melting ice sheets provide the surrounding oceans with the essential nutrient silica.

Silica is needed by a group of marine algae (the microscopic plants of the oceans) called diatoms, who use it to build their glassy cell walls (known as frustules).

These plankton take up globally significant amounts of carbon – they remove carbon dioxide from the atmosphere via photosynthesis, and act as a natural carbon sink when they die and fall to the bottom of the ocean – and form the base of the marine food chain.

The study published today in the journal Nature Communications suggests that glacial meltwater, both in the present and during past ice ages, contains silica that could be useful in sustaining the growth of diatoms in the oceans around ice sheets, which are home to economically important fisheries and marine life.

The researchers show that the silica in glacial meltwaters from the Greenland Ice Sheet has a distinctive isotopic signature, different to the that found in other rivers.

Researchers have previously found that diatoms and sponges (which build their skeletons from silica) gradually buried in ocean sediments since the last ice age have a different silicon isotopic signature to their modern-day relatives.

This lighter isotopic signature was thought to be the result of changing diatom activity and ocean currents during and between ice ages. However, researchers now think that a change in the isotopic signature of the river waters supplied to the ocean might account for these shifts.

Dr Jon Hawkings, lead author of the study from the University of Bristol’s School of Geographical Sciences, Bristol Glaciology Centre and Cabot Institute for the Environment said: “In this study we wanted to find out if silica in glacial meltwaters from a large ice sheet (Greenland) has a distinctive isotopic signature.

“If it does, then the huge quantities of meltwater coming from melting ice sheets during the deglaciation could account for some of the change in ocean silicon isotopic signature that have been recorded previously. Rapid ice sheet melting during the last ice age led to periods of sea level rise great than 3 cm per year (compared to around 0.3 cm per year at present).

“At peaks ice sheet melting an estimated 25,000 km3 of water was entering the oceans from melting ice sheets every year – this is more than three times the amount of water currently flowing from the Amazon river.

“If silica carried by ice sheet meltwaters does have a distinctive isotopic signature, then this reshapes how important ice sheets, and large deglaciation events, are in global biogeochemical cycles.”

Researchers examined silica concentrations in meltwaters and the silicon isotopic signature of those meltwaters (referred to as δ30Si, which we’re using as a “marker” of glacial silica), alongside a computer model using this data, and results from a marine sediment core off the coast of Iceland which shows distinctive changes in the silicon isotopic composition of sponges during periods of ice sheet collapse. They wanted to determine:

The study concluded that glaciers and ice sheets are an under-appreciated component of the silica cycle, exporting large quantities of reactive silica into the ocean, which could be used by diatoms. This might, say researchers, have major implications for the health of marine siliceous organisms during periods of significant ice cover and rapid deglaciation.

The study showed ice sheet runoff has the lightest silicon isotopic composition ever measured in running water – values for glacial meltwaters are much lower than any measurements of non-glacial riverine runoff.

Using this data combined with a simple computer model of the ocean since the last ice age maximum (around 21,000 years ago) the study predicts that up to a third of the observed changes in the silicon isotopic signature of siliceous organisms can be explained by the melting of the massive ice sheets that at their peak covered up to 30 percent of the land surface, including much of North America and Europe, including much of the United Kingdom.

The isotopic composition also helps to explain that meltwater is sourced from further into the ice sheet as the annual melting period progresses, flushing liquid water stored hundreds of meters under the ice.

Dr Hawkings added: “Our findings re-frame the traditional view of the importance of ice sheets in biogeochemical cycles, specifically of the silica cycle.

“Previously the huge quantities of water and sediment delivered from the ice sheets of the last ice age wasn’t fully considered as having a significant impact on marine chemistry and biology, but our study points that this is likely an oversight.

“Our interpretation of a number of other isotopic systems, and of changes to biogeochemical cycles since the last glacial maximum therefore likely needs re-evaluating.”

There is still a lot of work needed to discover the importance of ice sheets in global nutrient cycles.

The research team will now work to establish if other glaciers carry significant quantities of isotopically distinctive silica to the oceans, by visiting a range of glaciers around Greenland (and further afield) to see if this relationship holds.

Dr Kate Hendry, one of the Bristol co-authors, is currently leading a European Research Council funded project, ICY-LAB, to provide unprecedented insights into nutrient cycling, biomineralization, and the taxonomy and biogeography of siliceous organisms in an ecologically important region near Greenland. This will link into a Leverhulme Trust funded project based in Greenland this year led by Cabot Institute Director Professor Jemma Wadham, which will further explore the role of sub-ice weathering in the global silica cycle.

These projects will further establish what the passage of glacial meltwaters and sediments from glaciers through fjord systems (meltwater and seawater mixing zones) does to silica concentration and its isotopic composition, for example what proportion of the fine sediments carried by glacial meltwaters which contain a large proportion of the “diatom-available” silica are buried in the fjord. This is important for predicting how much silica is exported further off the coast of the ice sheets into the open ocean.

The researchers are also planning to use more complex and realistic computer models to delve deeper into the potential changes in the global silica cycle since the last glacial maximum. These might include more accurate representations of ocean currents, recycling of silica in the water column, and potential changes to the marine algal community.