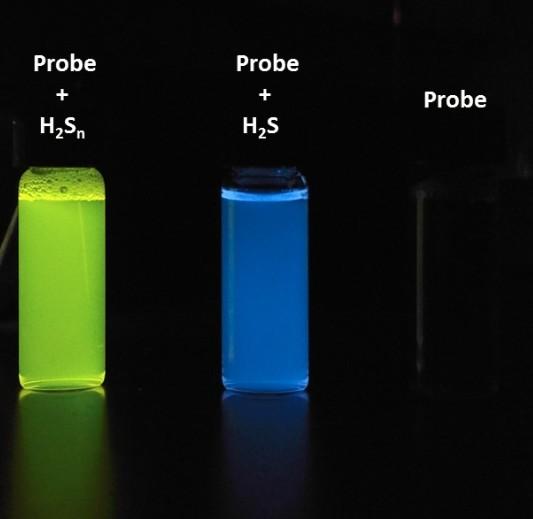 A new injectable compound illuminates hydrogen sulfide and hydrogen polysulfides in different colors when they are present in cells. Source: Washington State University

For the first time, researchers at Washington State University have created an injectable compound or “probe” that illuminates hydrogen sulfide and hydrogen polysulfides in different colors when they are present in cells.

Hydrogen sulfide and hydrogen polysulfides are gases notorious as the source of rotten egg stench. They are produced and used for a wide variety of processes in the body. They are thought to play a role in aging as well as diabetes, Alzheimer’s, heart attack, cancer and many other diseases, but their precise functions remain a mystery.

The new probe, developed by WSU chemistry professor Ming Xian, will give medical researchers the ability to start identifying the functions each gas plays in specific biological processes, such as inflammation in the heart or the buildup of tumor cells, which could eventually lead to the design of new drugs and medical therapies.

“Previously, we could detect the presence of sulfides in a group of inflamed muscle cells but we couldn’t tell if we were detecting plain hydrogen sulfide or a polysulfide using a single probe,” Xian said. “With this new probe, we should be able to tell them apart and start the long process of identifying what the two gasses are indicative of in the body.

“This will help to unravel mechanisms of disease and ultimately lead to more effective treatments,” he said.

Xian’s research is published as a very important paper in the July edition of the journalAngewandte Chemie. He is working with collaborators at Harvard Medical School to develop a more biocompatible version of the probe that can be injected into living animals and then tracked via an MRI machine.

For the last decade, Xian has been at the forefront of the global effort to design chemical methods to detect sulfide species. His laboratory is the world’s leading facility for producing sulfide probes that work in living tissues.

“Current techniques require destruction of the sample which, in turn, makes it extremely difficult to study the gaseous compounds’ potential roles in diseases,” Xian said. “Our products are not only proving to be invaluable tools for biomedical research, but also have diagnostic potential.”

In order to expand research in this field and expedite the process of developing useful biomedical tools, Xian collaborated with the WSU Office of Commercialization to license his sulfide detection probes for use by researchers at other institutions across the country and world.

“Since tools like these are developed to study things people have just discovered to be important, the market is often very small,” said Brian Kraft, director of business development for the WSU College of Arts and Sciences.

“The licensing portal will make Dr. Xian’s unique tools directly available to current users around the world,” he said. “It is our hope that this will grow the field of study and potentially spur commercial interest.”