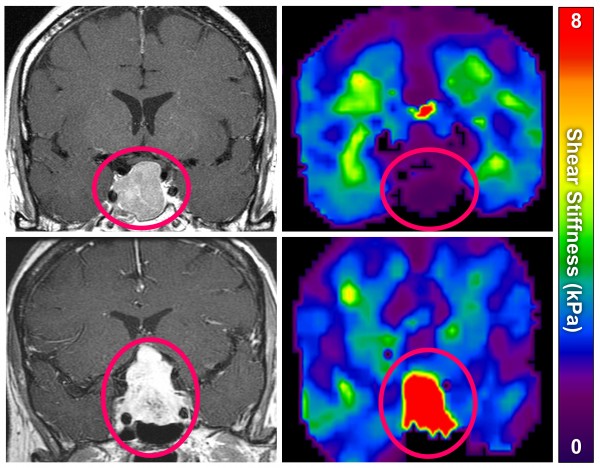 Important steps in planning tumor surgery include identifying borders between tumor and healthy tissue and assessing the tumor stiffness, e.g. hard and calcified or soft and pliant. For decades, tumors near the surface of the body have been evaluated for stiffness by simple palpation—the physician pressing on the tissue. Because tumors within the skull cannot be palpated, researchers used Magnetic Resonance Elastography (MRE) to assess pituitary tumor stiffness by measuring waves transmitted through the skull into pituitary macroadenomas (PMAs). MRE reliably identified tumors that were soft enough for removal with a minimally-invasive suction technique versus harder tumors requiring more invasive surgery.

“The group developed brain MRE several years ago and is now successfully applying it to clinical diagnosis and treatment,” explained Guoying Liu, Ph.D., Director of the NIBIB Program in Magnetic Resonance Imaging. “This development of a new imaging technique followed by its practical application in surgical planning for better patient outcomes is an outstanding example of one of the main objectives of NIBIB-funded research.”

MRE is a special magnetic resonance imaging technique that captures snapshots of shear waves that move through the tissue and create elastograms—images that show tissue stiffness. John Huston III, M.D., Professor of Radiology at the Mayo Clinic in Rochester, MN, and senior author of the study, explains how MRE works. “MRE is similar to a drop of water hitting a still pond to create the ripples that move out in all directions. We generate tiny, harmless ripples, or shear waves, that travel through the brain of the patient. Our instruments measure how the ripples change as they move through the brain and those changes give us an extremely accurate measure–and a color-coded picture–of the stiffness of the tissue.”

Ninety percent of PMAs are soft—nearly the consistency of toothpaste. Therefore, without MRE, surgeons would routinely plan for a procedure called transphenoidal resection that employs very thin instruments that are threaded through the nasal cavity to the pituitary gland at the base of the skull, where suction is used to remove the tumor. However, in about 10% of the cases, the surgeon will encounter a hard tumor. At that point an attempt is made to break-up the tumor—essentially chipping away at it with sharp instruments. If that is not successful, the surgeon must perform a fully-invasive craniotomy that involves removing a piece of the skull bone in order to fully expose the tumor.

The more extensive procedure means added risk and discomfort for patients, and up to a week-long recovery in the hospital compared to the transphenoidal approach that allows patients to leave the hospital in a day or two. Using MRE, hard PMAs can be identified and the more extensive craniotomy can be planned before starting the surgery, which makes the more invasive procedure less taxing for both the surgeon and patient. Similarly, MRE showing a soft PMA gives surgeons confidence that the nasal entry and removal by suction will be successful-eliminating the likelihood that the surgeon may need to perform a second fully-invasive craniotomy.

In the study of PMA reported in the January 2016 issue of the journal Pituitary, the group performed pre-surgical MRE evaluation of the PMAs of 10 patients.The MRE measurements were compared to tumor classifications made by inspection of the tumor during surgery. The surgeons categorized six tumors as soft and four tumors as medium. No tumors were deemed to be hard. The comparison of the MRE results and reports of stiffness by the surgeons when the tumor was removed and inspected were in close agreement, which was confirmed by statistical analysis.

Although brain MRE is not yet widely available, Huston explained that the surgeons at the Mayo Clinic are now routinely using MRE to plan the best procedure for the removal of PMAs as well as several other types of brain tumor. And, even though this study of the 10 PMA patients is a very small set, Huston believes that as Mayo surgeons continue to use MRE in planning, the technique will likely begin to be adopted by other surgical centers.

Huston explained that an important aspect of some of the other brain tumor types, which the surgeons are finding extremely useful, is the ability of MRE to identify tumor adhesion to the brain. Adhesion refers to whether the brain tumor and healthy brain tissue are connected by an extensive network of blood vessels and connective tissue. This is in comparison with a tumor that is in the brain but is isolated from healthy tissue.

When MRE is used to analyze this aspect of the tumor, it clearly identifies those that are non-adhered, showing a border around the tumor through which there are no vascular connections. Conversely, MRE of adhered tumors show no border between the tumor and healthy brain, indicating extensive vascular and soft tissue connections between brain and tumor. Mutual blood vessels make removal of adherent tumors much more difficult, with a much higher chance of damage to healthy tissue and potential loss of function for the patient.

Huston and his colleagues are continuing to apply MRE, often called “palpating by imaging” to diagnosis of other brain disorders. In addition to characterizing focal brain disorders such as tumors, the group is testing the potential for MRE to provide diagnostic information about diffuse brain disease, and are currently using MRE brain stiffness patterns to identify different types of neural disorders including dementia.