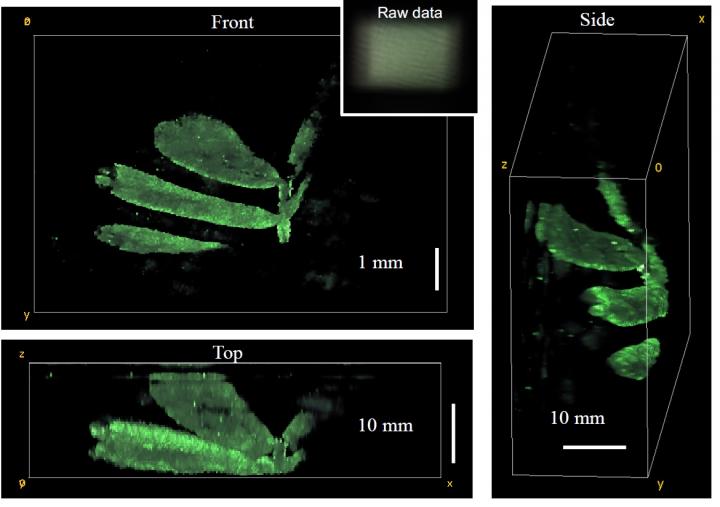 The researchers used the DiffuserCam to reconstruct the 3-D structure of leaves from a small plant. They plan to use the new camera to watch neurons fire in living mice without using a microscope. Credit Laura Waller, University of California, Berkeley

An experimental camera can produce extremely detailed images without even using a lens.

Scientists from the University of California, Berkeley has created an easy-to-build lensless camera that produces 3D images from a single 2D image.

“The DiffuserCam can, in a single shot, capture 3D information in a large volume with high resolution,” research team leader Laura Waller, Ph.D., an associate professor from the University of California, Berkeley, said in a statement. “We think the camera could be useful for self-driving cars, where the 3D information can offer a sense of scale, or it could be used with machine learning algorithms to perform face detection, track people or automatically classify objects.”

The compact and inexpensive camera—called the DiffuserCam—consists of only a diffuser placed on top of an image sensor.

The researchers found that the prototype could be used to reconstruct 100 million voxels or 3D pixels, from a 1.3-megapixel image without any scanning.

“Our new camera is a great example of what can be accomplished with computational imaging—an approach that examines how hardware and software can be used together to design imaging systems,” Waller said. “We made a concerted effort to keep the hardware extremely simple and inexpensive.

“Although the software is very complicated, it can also be easily replicated or distributed, allowing others to create this type of camera at home,” she added.

A DiffuserCam can be created using any type of image sensor. It can image objects that range from microscopic in scale to the size of a human being. The camera offers a resolution in the tens of microns range when imaging objects closer to the sensor. While the resolution decreases when imaging a scene farther away from the sensor, it is still high enough to distinguish that one person is standing several feet closer to the camera than another person.

The camera captures how much light is striking a pixel on the image sensor, as well as the angle from which the light hits the pixel.

Light field cameras have been limited in spatial resolution until now because some spatial information is lost while the directional information is collected. The microlens arrays used in the cameras are also expensive and must be customized for a particular camera or optical components used for imaging.

“I wanted to see if we could achieve the same imaging capabilities using simple and cheap hardware,” Waller said. “If we have better algorithms, could the carefully designed, expensive microlens arrays be replaced with a plastic surface with a random pattern such as a bumpy piece of plastic?”

The researchers are now attempting to eliminate the need to acquire a few images of a moving point of light to calibrate the software prior to imaging by using the raw data for calibration. They also want to improve the accuracy of the software and make the 3D reconstruction faster.

The researchers plan to initially use the camera to watch microscopic neuron activity in living mice without a microscope. Eventually, the camera could be used in a number of applications involving 3D capture.

The study was published in Optica.