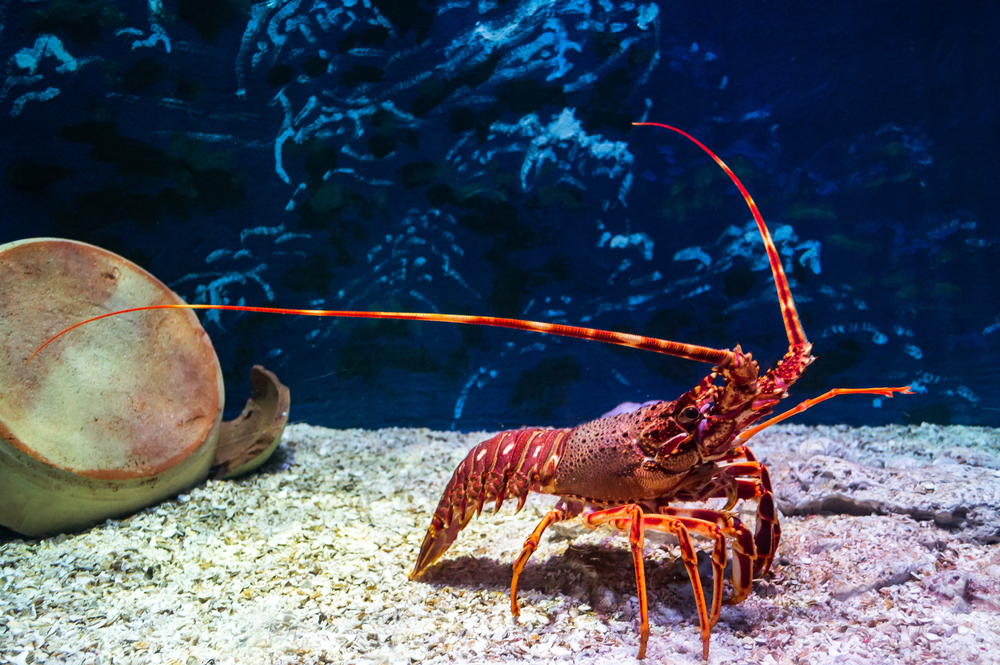 Flip a lobster on its back, and you’ll see that the underside of its tail is split in segments connected by a translucent membrane that appears rather vulnerable when compared with the armor-like carapace that shields the rest of the crustacean.

But engineers at MIT and elsewhere have found that this soft membrane is surprisingly tough, with a microscopic, layered, plywood-like structure that makes it remarkably tolerant to scrapes and cuts. This deceptively tough film protects the lobster’s belly as the animal scuttles across the rocky seafloor.

The membrane is also stretchy, to a degree, which enables the lobster to whip its tail back and forth, and makes it difficult for a predator to chew through the tail or pull it apart.

This flexibility may come from the fact that the membrane is a natural hydrogel, composed of 90 percent of water. Chitin, a fibrous material found in many shells and exoskeletons, makes up most of the rest.

The team’s results show that the lobster membrane is the toughest material of all natural hydrogels, including collagen, animal skins, and natural rubber. The membrane is about as strong as industrial rubber composites, such as those used to make car tires, garden hoses, and conveyor belts.

The lobster’s tough yet stretchy membrane could serve as a design guide for more flexible body armor, particularly for highly mobile regions of the body, such as elbows and knees.

“We think this work could motivate flexible armor design,” says Ming Guo, the d’Arbeloff Career Development Assistant Professor in the Department of Mechanical Engineering at MIT. “If you could make armor out of these types of materials, you could freely move your joints, and it would make you feel more comfortable.”

The full paper detailing the team’s results appeared online Feb. 14 in the journal Acta Materialia. (The journal posted an uncorrected proof on Jan. 31.) Guo’s co-authors are Jinrong Wu and Hao Zhang of Sichuan University, Liangliang Qu and Fei Deng of Harvard University, and Zhao Qin, who is a research scientist in the MIT Department of Civil and Environmental Engineering and another senior author of the paper.

Guo started looking into the properties of the lobster membrane following a dinner with a visitor to his lab.

“He had never eaten lobster before, and wanted to try it,” Guo recalls. “While the meat was very good, he realized the belly’s transparent membrane was really hard to chew. And we wondered why this was the case.”

While much research has been devoted to the lobster’s distinctive, armor-like shell, Guo found there was not much known about the crustacean’s softer tissues.

“When lobsters swim, they stretch and move their joints and flip their tails really fast to escape from predators,” Guo says. “They can’t be entirely covered in a hard shell — they need these softer connections. But nobody has looked at the membrane before, which is very surprising to us.”

So he and his colleagues set about characterizing the properties of the unusual material. They cut each membrane into thin slices, each of which they ran through various experimental tests. They placed some slices in a small oven to dry, then afterward measured their weight. From these measurements, they estimated that 90 percent of the lobster’s membrane consists of water, making it a hydrogel material.

They kept other samples in saline water to mimic a natural ocean environment. With some of these samples, they performed mechanical tests, placing each membrane in a machine that stretches the sample, while precisely measuring the force applied. They observed that the membrane was initially floppy and easily stretched, until it reached about twice its initial length, at which point the material started to stiffen and became progressively tougher and more resistant to stretching.

“This is quite unique for biomaterials,” Guo notes. “For many other tough hydrogels, the more you stretch, the softer they are. This strain-stiffening behavior could allow lobsters to flexibly move, but when something bad happens, they can stiffen and protect themselves.”

As a lobster makes its way across the seafloor, it can scrape against abrasive rocks and sand. The researchers wondered how resilient the lobster’s membrane would be to such small scrapes and cuts. They used a small scalpel to scratch the membrane samples, then stretched them in the same way as the intact membranes.

“We made scratches to mimic what might happen when they’re moving through sand, for example,” Guo explains. “We even cut through half the thickness of the membrane and found it could still be stretched equally far. If you did this with rubber composites, they would break.”

The researchers then zoomed in on the membrane’s microstructure using electron microscopy. What they observed was a structure very similar to plywood. Each membrane, measuring about a quarter of a millimeter thick, is composed of tens of thousands of layers. A single layer contains untold numbers of chitin fibers, resembling filaments of straw, all oriented at the same angle, precisely 36 degrees offset from the layer of fibers above. Similarly, plywood is typically made of three or more thin layers of wood, the grain of each layer oriented at right angles to the layers above and below.

“When you rotate the angle of fibers, layer by layer, you have good strength in all directions,” Guo says. “People have been using this structure in dry materials for defect tolerance. But this is the first time it’s been seen in a natural hydrogel.”

Led by Qin, the team also carried out simulations to see how a lobster membrane would react to a simple cut if its chitin fibers were aligned like plywood, versus in completely random orientations. To do this, they first simulated a single chitin fiber and assigned it certain mechanical properties, such as strength and stiffness. They then reproduced millions of these fibers and assembled them into a membrane structure composed of either completely random fibers or layers of precisely oriented fibers, similar to the actual lobster membrane.

“It is amazing to have a platform that allows us to directly test and show how identical chitin fibers yield very different mechanical properties once they are built into various architectures” Qin says.

Finally, the researchers created a small notch through both the random and layered membranes, and programmed forces to stretch each membrane. The simulation visualized the stress throughout each membrane.

“In the random membrane, the stress was all equal, and when you stretched it, it quickly fractured,” Guo says. “And we found the layered structure stretched more without breaking.”

“One mystery is how the chitin fibers can be guided to assemble into such a unique layered architecture to form the lobster membrane,” Qin says. “We are working toward understanding this mechanism, and believe that such knowledge can be useful to develop innovative ways of managing the microstructure for material synthesis.”

In addition to flexible body armor, Guo says materials designed to mimic lobster membranes could be useful in soft robotics, as well as tissue engineering. If anything, the results shed new light on the survival of one of nature’s most resilient creatures.

“We think this membrane structure could be a very important reason for why lobsters have been living for more than 100 million years on Earth,” Guo says. “Somehow, this fracture tolerance has really helped them in their evolution.”