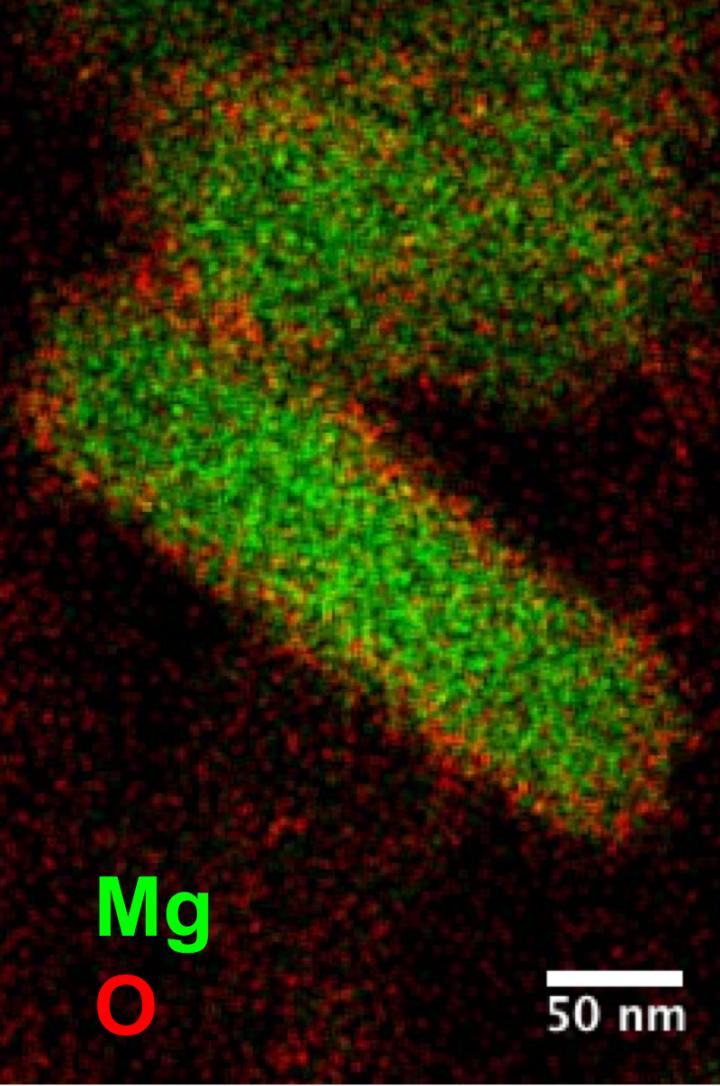 Rice University researchers have synthesized and isolated plasmonic magnesium nanoparticles that show all the promise of their gold, silver and aluminum cousins with none of the drawbacks.

The Rice lab of materials scientist Emilie Ringe produced the particles to test their ability to emit plasmons, the ghostly electron bands that, when triggered by energy from outside, ripple across the surface of certain metals.

Plasmonic materials are valuable because they can concentrate light and squeeze its power in nanoscale volumes, a useful property for chemical and biological sensors. They can also be used as photocatalysts and for medical applications in which they can, for instance, target cancer cells and be triggered to emit heat to destroy them.

But gold and silver are expensive. “They’re just not affordable if you’re trying to do cheap things on a very large scale, like industrial catalysis,” said Ringe, an assistant professor of materials science and nanoengineering and of chemistry at Rice.

“We’ve been really excited about aluminum, because it’s one of the only Earth-abundant plasmonic materials, but it has a critical flaw,” she said. “Its intrinsic properties mean it is a good plasmonic in the ultraviolet range, but not as good in the visible and poor in the infrared. That’s not so great it you want to do photocatalysis with the sun.”

Those limitations set the stage for the Ringe lab’s investigation of also-abundant magnesium. “It can resonate across the infrared, visible and ultraviolet ranges,” she said. “People have been talking about it, but no one’s really been able to make and look at the optical properties of single crystals of magnesium.”

Attempts by other labs to fabricate magnesium structures proved difficult and produced nanoparticles with poor crystallinity, so Ringe and co-authors John Biggins of the University of Cambridge, England, and Rice postdoctoral fellow Sadegh Yazdi combined their talents in chemistry, spectroscopy and theory to synthesize nanocrystals in liquid and analyze them with Rice’s powerful electron microscope.

What they produced were nanoscale crystals that perfectly reflected the hexagonal nature of their underlying lattice. “This gives us an opportunity,” she said. “Silver, gold and aluminum, all the metals we’re used to working with at the nanoscale, are face-centered cubic materials. You can make cubes and rods and things that have the symmetry of the underlying structure.

“But magnesium has a hexagonal lattice,” Ringe said. “The atoms are packed differently, so we’re able to make shapes we physically cannot make with a face-centered cubic metal. We’re really excited about the possibilities because it means we can make new shapes – or at least shapes that are not typical of nanoparticles. And new shapes mean new properties.”

The particles proved to be unexpectedly robust, she said. The lab began by mixing a magnesium precursor with lithium and naphthalene, creating a powerful free radical that could reduce an organometallic magnesium precursor to magnesium metal. The resulting particles were hexagonal plates that ranged in size from 100 to 300 nanometers with a thickness between 30 and 60 nanometers.

Like bulk magnesium, they found that a self-limiting oxide layer formed around the magnesium that protected it from further oxidation without changing the material’s plasmonic properties. That helped preserve the particles’ characteristic shape, which remained stable even three months after synthesis and several weeks in air, Ringe said.

“It’s formidably air-stable,” she said. “At the start, we took all the precautions we could, using a glove box for every transfer of sample, and at the end of the day we decided to just leave a sample out in the air, just to see. We tested it after two weeks, and it was still the same.

“We tried that a bit too late, to be honest,” Ringe said. “We could have saved time if we’d just started with that!”

The next step will be to enhance the particles with binding molecules that will help them change their shapes, which also tunes their plasmonic response. She expects that will take another year of work.

“The key point is that this is going to be a tool in the plasmonics toolbox that can do things none of the other metals can do,” Ringe said. “No other metal is cheap and can resonate across the entire spectrum. And it can be made, essentially, in a beaker.”