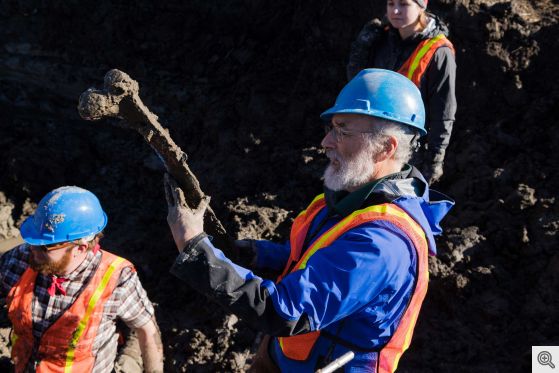 Researchers have found additional bones of a mammoth on the same site they found skeletal remains of the Ice Age-era animal in 2015.

Paleontologists from the University of Michigan have found 40 bones and bone fragments from a Mammoth at the J. Bristle Farm in Manchester, Michigan, just two years after they found a skull, tusks and dozens of intact bones at the same farm.

“This return to the Bristle site was absolutely a success,” Michigan paleontologist Daniel Fisher, who led both Bristle digs and is overseeing the analysis of the bones and the environmental samples, said in a statement. “We got the kind of information that we need to do the science right and we were also able to recover an impressive amount of additional material from this animal.

“So I’m confident that as a result of this second excavation, we’ll have more insight into what happened here,” he added.

The researchers returned to the farm because a single radiocarbon date from one of the 2015 bones showed that the mammoth, which is believed to weight almost nine tons, was more than 15,000 years old and several lines of evidence point to human processing of the mammoth carcass for food.

With additional studies, they may prove that the Bristle Mammoth would represent the earliest instance of human interaction with a mammoth in the eastern Great Lakes basin.

The 40 bones found include several vertebrae, skull fragments, an intact rib, part of a shoulder blade, a piece of the pelvis and what appears to be part of the mandible. However, the researchers were unable to uncover the limb and foot bones and the tail vertebrae.

The bones were discovered about 10 feet below the current land surface, in fine-grained clays and marls from the bottom of a pond that no longer exists.

The oldest well-documented, published evidence for humans in Michigan is about 13,000 years ago, the age of the spear-wielding Clovis hunters.

The first mammoth bones were discovered while farmer James Bristle was installing a drainage system at a low spot in one of his fields. For the first dig, Bristle gave the researchers only one day to recover whatever remains they could find. The first dig resulted in 55-to-60 nearly complete mammoth bones, accounting for 30-to-40 percent of the animal’s skeletal mass.