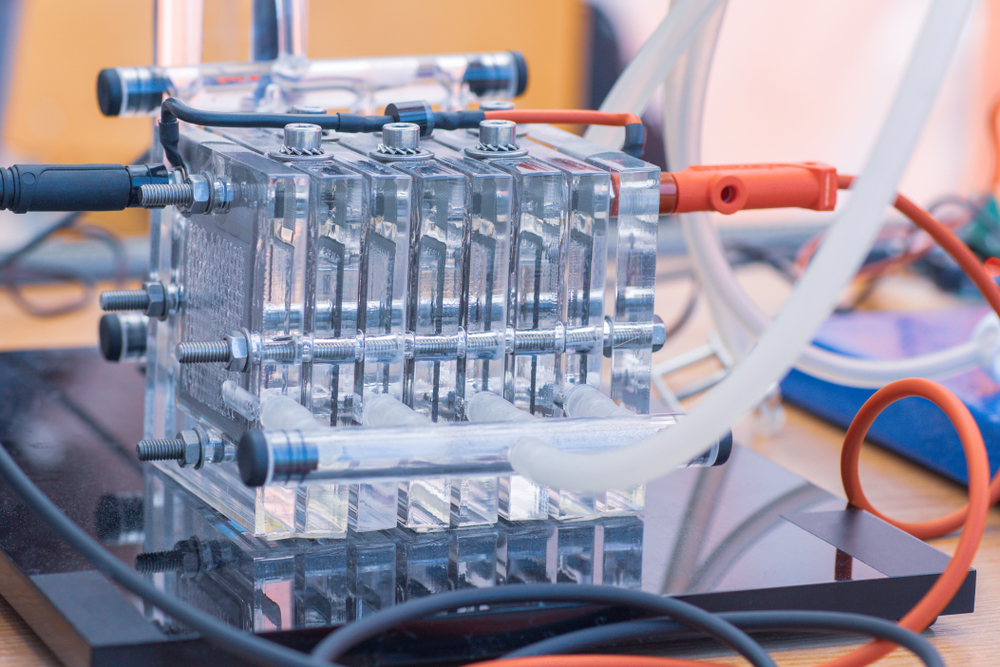 Researchers from the University of Wisconsin-Madison have created a new, cheaper fuel cell that utilizes an organic compound to shuttle electrons and protons.

To overcome the expense and performance issues associated with producing fuel cells, the researchers packed cobalt into a reactor that will perform despite large quantities of materials. They then used a new technique to shuttle the electrons and protons back and forth from the reactor to the fuel cell using an organic compound called quinone.

Quinone is able to carry a pair of electrons and protons at a time, picking up the particles at the fuel cell electrode and transporting them to a reactor. The compounds then returns to the fuel cell to pick up more protons and electrons.

While quinone compounds tend to degrade into a tar-like substance after only a few round trips, the researchers developed a new, stable quinone derivate that slows down the compounds deterioration significantly. The modified compounds lasted up to 5,000 hours—more than a 100-fold increase compared to other quinone structures.

“While it isn’t the final solution, our concept introduces a new approach to address the problems in this field,” Shannon Stahl, the UW-Madison professor of chemistry who led the study in collaboration with Thatcher Root, a professor of chemical and biological engineering, said in a statement.

The new system is about 100 times more effective than biofuel cells that use related organic shuttles, but its output produces about 20 percent of what is possible in the hydrogen fuel cells currently on the market.

In traditional fuel cells, hydrogen electrons and protons are transported from one electrode to another, where they react with oxygen to produce water and convert chemical energy into electricity.

However, this process requires a catalyst to accelerate the reactions and produce enough of a charge in a short enough period of time. Currently, the best catalyst for fuel cells is the expensive metal platinum.

While it makes sense to use less expensive metals, large quantities would be required, leading to performance issues.

“The problem is, when you attach too much of a catalyst to an electrode, the material becomes less effective, leading to a loss of energy efficiency,” Stahl said.

The researchers next plan to increase the performance and allow the quinone mediators to shuttle electrons more effectively and produce more power.

“The ultimate goal for this project is to give industry carbon-free options for creating electricity,” Colin Anson, a postdoctoral researcher in the Stahl lab and publication co-author, said in a statement. “The objective is to find out what industry needs and create a fuel cell that fills that hole.”