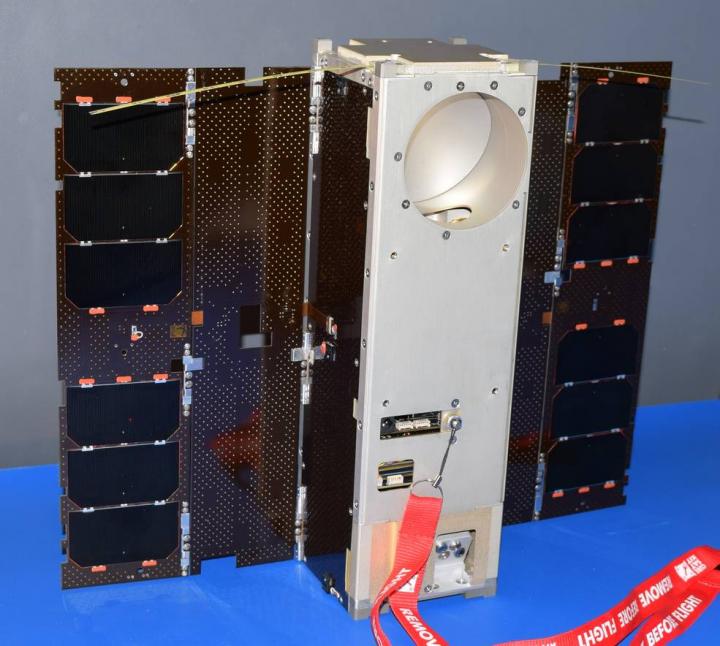 The Microwave Radiometer Technology Acceleration (MiRaTA) satellite, a 3U CubeSat, is shown with solar panels fully deployed, flanking the body of the spacecraft, which has a circular aperture at the top for the microwave radiometer antenna, used for atmospheric science measurements. There are also two small, thin tape-measure antennas on the top, used for UHF radio communication with the ground station. Credit: MIT Lincoln Laboratory

Behind every weather forecast--from your local, five-day prediction to a late-breaking hurricane track update--are the satellites that make them possible. Government agencies depend on observations from weather satellites to inform forecast models that help us prepare for approaching storms and identify areas that need evacuating or emergency first responders.

Weather satellites have traditionally been large, both in the effort needed to build them and in actual size. They can take several years to build and can be as big as a small school bus. But all of that could change in the future with the help of a shoebox-sized satellite that will start orbiting Earth later this month.

The NASA-funded CubeSat, called Microwave Radiometer Technology Acceleration (MiRaTA), will be launched into Earth's orbit from the rocket carrying the next big U.S. weather satellite (NOAA's JPSS-1) into space. MiRaTA is designed to demonstrate that a small satellite can carry instrument technology that's capable of reducing the cost and size of future weather satellites and has the potential to routinely collect reliable weather data.

Microwave radiometers are one of the workhorse instruments aboard today's weather satellites. These sensitive instruments measure radio frequency signals related to the thermal radiation emitted by atmospheric gases, such as molecular oxygen and water vapor, and also detect particles such as cloud ice. These data are key inputs for models that track storms and other weather events. Calibrating these radiometers is important for keeping them from drifting so their data can be used for accurate weather and climate models. Therefore, a calibration target is usually included in the satellite to help the radiometer maintain its accuracy.

Miniaturizing microwave radiometer instruments to fit on a CubeSat leads to the challenge of finding a calibration instrument that is not only accurate but also compact, said Kerri Cahoy, principal investigator for MiRaTA and an associate professor in the Department of Aeronautics and Astronautics at the Massachusetts Institute of Technology. "You don't have room for the bulky calibration targets that you would normally use on larger satellites," Cahoy said. "Microwave radiometer calibration targets on larger satellites can be the size of a toaster, but for CubeSats, it would have to be the size of a deck of cards."

Cahoy and her colleague William Blackwell, the microwave radiometer instrument lead at MIT Lincoln Laboratory, have come up with a solution based on a technique she studied in graduate school called radio occultation (RO), whereby radio signals received from GPS satellites in a higher orbit are used to measure the temperature of the same volume of atmosphere that the radiometer is viewing. The GPS-RO temperature measurement can then be used for calibrating the radiometer.

"In physics class, you learn that a pencil submerged in water looks like it's broken in half because light bends differently in the water than in the air," Cahoy said. "Radio waves are like light in that they refract when they go through changing densities of air, and we can use the magnitude of the refraction to calculate the temperature of the surrounding atmosphere with near-perfect accuracy and use this to calibrate a radiometer."

In 2012 NASA's In-Space Validation of Earth Science Technologies (InVEST) program issued a request for technology demonstration proposals, which prompted Blackwell and Cahoy, who was then teaching at MIT, put their theory to the test by offering a project to Cahoy's students in her sensors and instrumentation class to determine if the idea was feasible. When two students demonstrated through computer modeling that radio occultation could indeed function for radiometer calibration, Cahoy and Blackwell asked The Aerospace Corporation's Rebecca Bishop, who has developed GPS-RO receivers for CubeSats, to join the team. They then submitted a full proposal for MiRaTA to NASA, which gave the greenlight for funding in the spring of 2013.

Building MiRaTA was a team effort. Bishop modified an off-the-shelf, low-cost GPS receiver to make the radio occultation measurements for calibration; MIT Lincoln Laboratory and University of Massachusetts Amherst applied their engineering skills to further miniaturize the microwave radiometer; and Cahoy and her student team, guided by expert mentors at MIT Lincoln, built the satellite that would house everything.

"Building a CubeSat can be hard because you have to put batteries, a radio, a computer, your instruments, wheels that you spin to tip and turn your satellite, and folded solar panels and antennas all into a very small space," Cahoy said. "And you're using the space equivalent of scotch tape and super glue to constrain this mess of wires and connectors and get it into its housing.

"But," Cahoy added, "the hard work will really pay off in great science data if it all goes as planned."

In the best-case scenario, three weeks after launch MiRaTA will be fully operational, and within three months the team will have obtained validation data from both the radiometer and the GPS receiver. The big goal for the mission--declaring the technology demonstration a success--would be confirmed a bit farther down the road, at least half a year away, following the data analysis.

If MiRaTA's technology validation is successful, Cahoy said she envisions an eventual constellation of these CubeSats orbiting the entire Earth, taking snapshots of the state of the atmosphere and weather every 15 minutes--frequent enough to track storms, from blizzards to hurricanes, in real time. "Our goal is to have our radiometers perform just as well as those on current weather satellites and be able to provide the kind of data that helps agencies and people in the path of a natural disaster prepare early and wisely," she said.

"This is a very exciting mission as it will be the first on-orbit demonstration of an all-weather, three-frequency radiometer CubeSat using atmospheric GPS-RO-based calibration," said NASA Jet Propulsion Laboratory's Charles Norton, a program associate in NASA's Earth Science Technology Office (ESTO) and the task manager for MiRaTA. "It's a true testament to the creativity and innovation of the teams involved that they're advancing measurement technologies for future small satellite constellation missions," he said, while adding that Utah State University's Space Dynamics Laboratory and NASA Wallops Flight Facility are supporting ground station and mission operations for the CubeSat.

MiRaTA and other Earth science InVEST missions are funded and managed by NASA's ESTO program in NASA's Earth Science Division. ESTO supports technologists at NASA centers, industry and academia to develop, refine and demonstrate new methods for observing Earth from space, from information systems to new components and instruments.