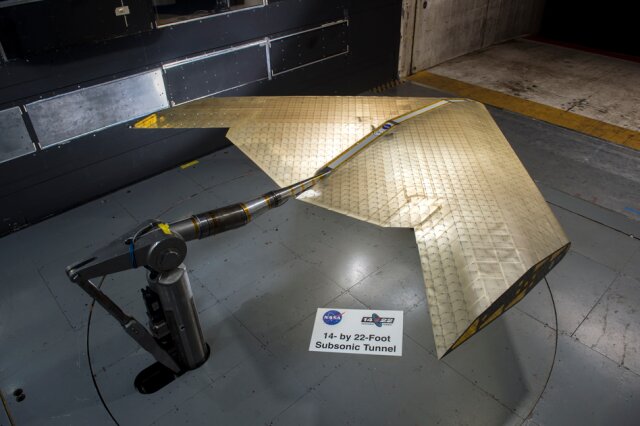 A Massachusetts Institute of Technology (MIT) and NASA research team has developed a new kind of airplane wing that is assembled with hundreds of tiny identical pieces that enable it to change shape and control flight.

Rather than piecing together separate movable surfaces like ailerons to control the roll and pitch of the plane, the new assembly incorporates a mix of stiff and flexible components in its structure, making it possible to deform the entire wing or specific parts of it.

The tiny subassemblies are bolted together to form an open, lightweight lattice framework that is then covered with a thin layer of similar polymer material as the framework of a lightweight and more efficient wing.

The structure is comprised of thousands of tiny triangles of matchstick-like struts, comprised mostly of empty space, to form a mechanical metamaterial that combines the structural stiffness of a rubber-like polymer and the lightweight and low density of an aerogel.

Each phase of flight, including the takeoff and landing, cruising and maneuvering, has its own, different set of optimal wing parameters.

A conventional wing is not optimized for any particular phase, which reduces efficiency. However, the new wing, which is constantly deformable, could yield a better approximation of the best configuration of each stage of flight.

While possible to include motors and cables that produce the forces required to deform wings, the researchers designed a system that will automatically respond to changes in its aerodynamic loading conditions by shifting its shape.

“We're able to gain efficiency by matching the shape to the loads at different angles of attack,” research engineer Nicholas Cramer at NASA Ames in California and the paper's lead author, said in a statement. “We're able to produce the exact same behavior you would do actively, but we did it passively.”

To enable the passive behavior, the new design entails the careful design of the relative positions of struts with different amounts of flexibility or stiffness so that the wing or sections of it will bend in specific ways in response to particular kinds of stress.

Previously the researchers were able to develop a meter-long wing and in the new study, they created a five-meter long wing that is comparable to the wing of a single-seater plane.

To make the new wing, the researchers used injection molding with polyethylene resin in a complex 3D mold. They can produce each part in just 17 seconds, resulting in a lattice that has a density of just 5.6 kilograms per cubic meter, significantly less than the density of rubber.

“They have the same stiffness, but ours has less than roughly one-thousandth of the density,” Benjamin Jenett, a graduate student in MIT's Center for Bits and Atoms, said in a statement.

The new wing was designed to be large enough to accommodate NASA’s high-speed wind tunnel at the Langley Research Center.

Jenett explained that the same approach could also be used to produce other structures, such as the wing-like blades of wind turbines where the ability to assemble on-site could reduce the problems associated with transporting the blades to the site. This could also be beneficial for bridges and other high performance structures.