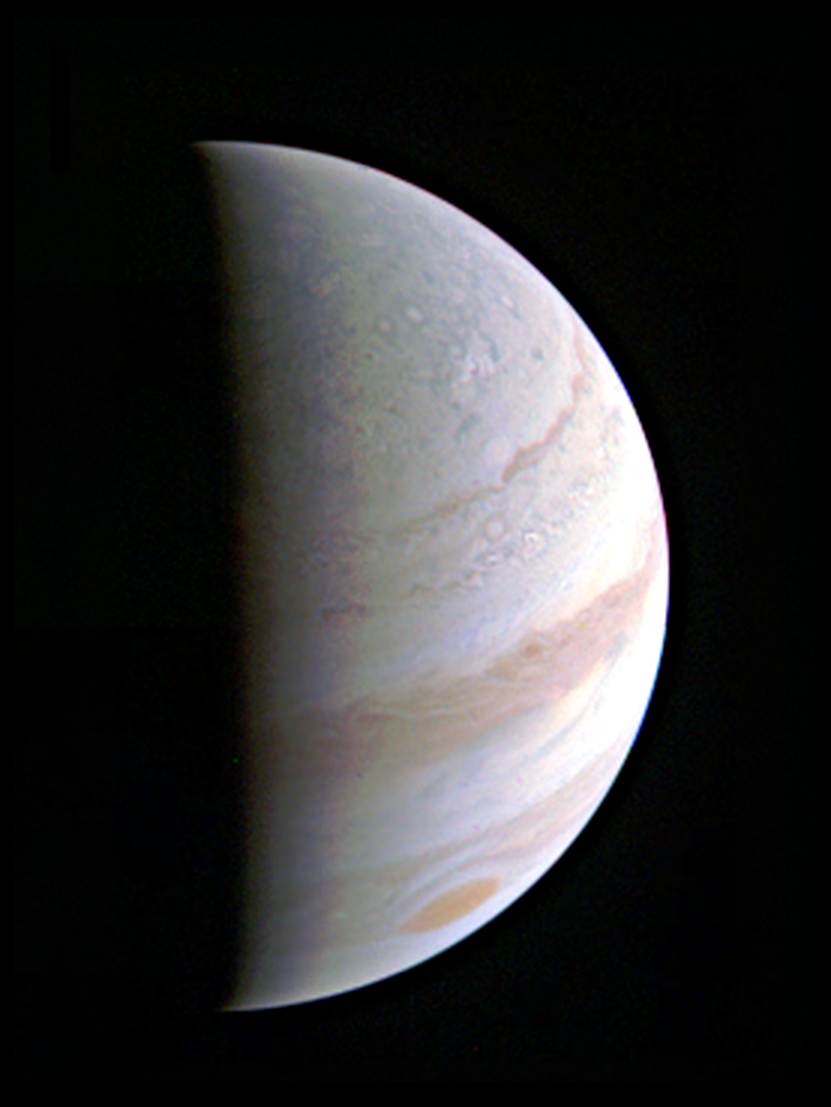 Jupiter’s north polar region is coming into view as NASA’s Juno spacecraft approaches the giant planet. This view of Jupiter was taken on August 27, when Juno was 437,000 miles (703,000 kilometers) away. Credits: NASA/JPL-Caltech/SwRI/MSSS

NASA’s Juno mission successfully executed its first of 36 orbital flybys of Jupiter today. The time of closest approach with the gas-giant world was 6:44 a.m. PDT (9:44 a.m. EDT, 13:44 UTC) when Juno passed about 2,600 miles (4,200 kilometers) above Jupiter’s swirling clouds. At the time, Juno was traveling at 130,000 mph (208,000 kilometers per hour) with respect to the planet. This flyby was the closest Juno will get to Jupiter during its prime mission.

“Early post-flyby telemetry indicates that everything worked as planned and Juno is firing on all cylinders,” said Rick Nybakken, Juno project manager at NASA’s Jet Propulsion Laboratory in Pasadena, California.

There are 35 more close flybys of Jupiter planned during Juno’s mission (scheduled to end in February 2018). The August 27 flyby was the first time Juno had its entire suite of science instruments activated and looking at the giant planet as the spacecraft zoomed past.

“We are getting some intriguing early data returns as we speak,” said Scott Bolton, principal investigator of Juno from the Southwest Research Institute in San Antonio. “It will take days for all the science data collected during the flyby to be downlinked and even more to begin to comprehend what Juno and Jupiter are trying to tell us.”

While results from the spacecraft’s suite of instruments will be released down the road, a handful of images from Juno’s visible light imager — JunoCam — are expected to be released the next couple of weeks. Those images will include the highest-resolution views of the Jovian atmosphere and the first glimpse of Jupiter’s north and south poles.

“We are in an orbit nobody has ever been in before, and these images give us a whole new perspective on this gas-giant world,” said Bolton.