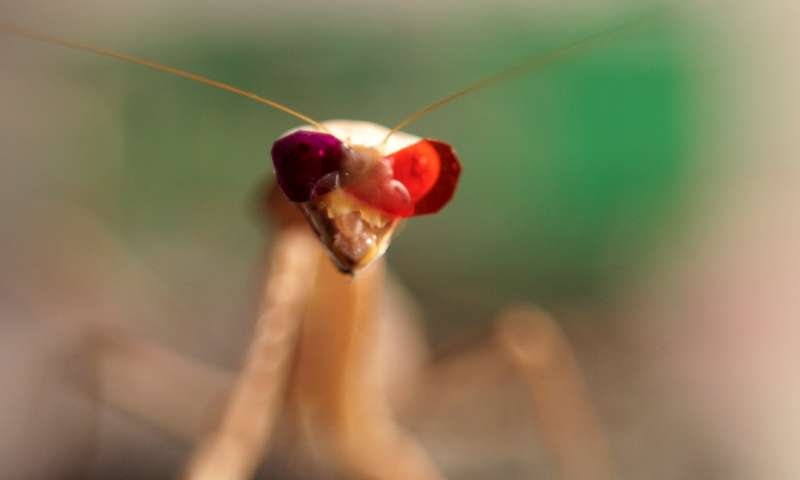 Miniature glasses have revealed a new form of 3D vision in praying mantises that could lead to simpler visual processing for robots.

Publishing their latest research in Current Biology, the team at Newcastle University, UK has discovered that mantis 3D vision works differently from all previously known forms of biological 3D vision.

3D or stereo vision helps us work out the distances to the things we see. Each of our eyes sees a slightly different view of the world. Our brains merge these two views to create a single image, while using the differences between the two views to work out how far away things are.

A team at the Institute of Neuroscience at Newcastle University funded by the Leverhulme Trust have been investigating whether praying mantis 3D vision works in the same way as humans’.

To investigate this they created special insect 3D glasses which were temporarily glued on with beeswax.

In their insect 3D cinema, they could show the mantis a movie of tasty prey, apparently hovering right in front of the mantis. The illusion is so good the mantises try to catch it.

The scientists could now show the mantises not only simple movies of bugs, but the complex dot-patterns used to investigate human 3D vision. This enabled them to compare human and insect 3D vision for the first time.

This makes mantis 3D vision very robust. Even if the scientists made the two eyes’ images completely different, mantises can still match up the places where things are changing. They did so even when humans couldn’t.

“This is a completely new form of 3D vision as it is based on change over time instead of static images,” said behavioural ecologist, Dr Vivek Nityananda at Newcastle University. “In mantises it is probably designed to answer the question ‘is there prey at the right distance for me to catch?'”

As part of the wider research, a Newcastle University engineering student developed an electronic mantis arm which mimics the distinct striking action of the insect.

Fellow team-member from the School of Engineering, Dr Ghaith Tarawneh adds, “Many robots use stereo vision to help them navigate, but this is usually based on complex human stereo. Since insect brains are so tiny, their form of stereo vision can’t require much computer processing. This means it could find useful applications in low-power autonomous robots.”