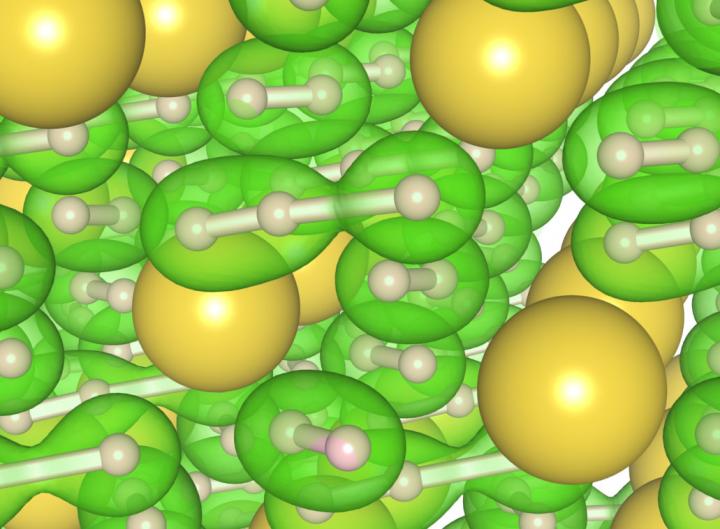 At center, in green, is the new three-atom hydrogen ‘chain.’ It is surrounded by several ‘normal’ two-atom molecules of hydrogen, also in green. The new chain configuration appears in the new material NaH7, which was produced under high pressure and high temperature conditions. The new material could change the superconductivity landscape and be useful for hydrogen storage in hydrogen fuel cells.. Source: Image courtesy Duck Young Kim

Scientists have looked for different ways to force hydrogen into a metallic state for decades. A metallic state of hydrogen is a holy grail for materials science because it could be used for superconductors, materials that have no resistance to the flow of electrons, which increases electricity transfer efficiency many times over. For the first time researchers, led by Carnegie’s Viktor Struzhkin, have experimentally produced a new class of materials blending hydrogen with sodium that could alter the superconductivity landscape and could be used for hydrogen-fuel cell storage. The research is published in Nature Communications.

It had been predicted that certain hydrogen-rich compounds consisting of multiple atoms of hydrogen with so-called alkali metals like lithium, potassium or sodium, could provide a new chemical means to alter the compound’s electronic structure. This, in turn, may lead the way to metallic high-temperature superconductors.

“The challenge is temperature,” explained Struzhkin. “The only superconductors that have been produced can only exist at impractically cold temperatures. In recent years, there have been predictions of compounds with several atoms of hydrogen coupled with alkali metals that could exist at more practical temperatures. They are theorized to have unique properties useful to superconductivity.”

The team used theory to guide their experiments and measured the samples using both a method that reveals the atomic structure (X-ray diffraction) and a method that identifies molecules by characteristics such as their minute vibrations and rotations (Raman spectroscopy). Theoretically, the sodium/hydrogen material would be stable under pressure, have metallic characteristics and unique structures, and show superconducting properties.

The team conducted high-pressure/high-temperature experiments. Matter under these extreme conditions can morph into new structures with new properties. They squeezed lithium and sodium samples in a diamond anvil cell to enormous pressures while heating the samples using a laser. At pressures between 300,000 and 400,000 atmospheres (30-40 gigapascals, or GPa) and temperatures of about 3100°F (2000 kelvin), they observed, for the first time, structures of “polyhydrides,” sodium with 3 hydrogen atoms (NaH3) and NaH7–sodium with seven atoms of hydrogen–in very unusual configurations. Three negative charged hydrogen atoms in the NaH7 material lined up and looked like one-dimensional hydrogen chains, which is a new phase that is very different from pure hydrogen.

“This configuration was originally predicted to exist in 1972, more than 40 years ago,” remarked Duck Young Kim. “It turns out that our experiments are in complete agreement with the theory, which predicted the existence of NaH3. The bonus is that we also observed the compound with seven hydrogen atoms.”

Struzhkin reflected, “Further work needs to be done to see if materials in this class can be produced at lower temperatures and pressures. But this new class of matter opens up a whole new world of possibilities.”