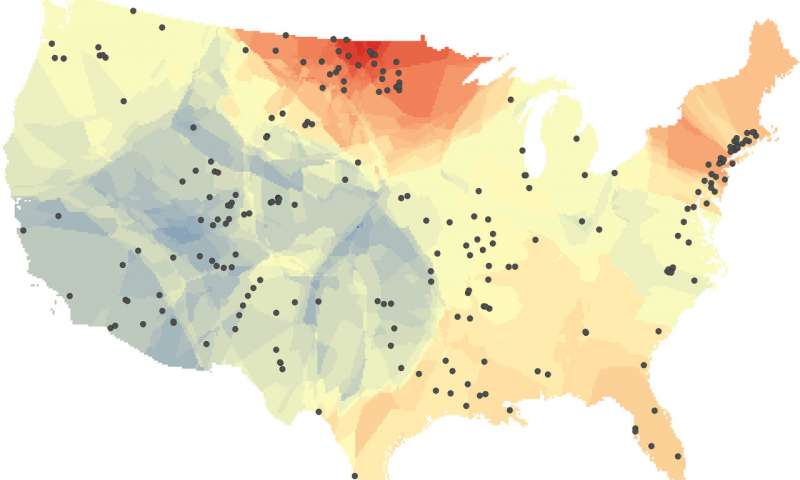 This map shows changes in the salt content of fresh water in rivers and streams across the United States over the past half century. Warmer colors indicate increasing salinity while cooler colors indicate decreasing salinity. The black dots represent the 232 US Geological Survey monitoring sites that provided the data for the study. Credit: Ryan Utz/Chatham University

Across North America, streams and rivers are becoming saltier, thanks to road deicers, fertilizers and other salty compounds that humans indirectly release into waterways. At the same time, freshwater supplies are becoming more alkaline.

A new study led by University of Maryland researchers is the first to assess long-term changes in freshwater salinity and pH at the continental scale. Drawn from data recorded at 232 U.S. Geological Survey monitoring sites across the country over the past 50 years, the analysis shows significant increases in both salinization and alkalinization. The study results also suggest a close link between the two properties, with different salt compounds combining to do more damage than any one salt on its own.

The analysis, which has implications for freshwater management and salt regulation strategies in the United States, Canada and beyond, was published in the January 8, 2018 Early Edition of the Proceedings of the National Academy of Sciences. Researchers at the Cary Institute of Ecosystem Studies, the University of Connecticut, the University of Virginia and Chatham University co-authored the study.

“We created the name ‘Freshwater Salinization Syndrome’ because we realized it’s a suite of effects on water quality, with many different salt ions linked together. We didn’t know that before,” said Sujay Kaushal, a professor of geology at UMD and lead author of the study. “Many people assume that when you apply salt to the landscape it just gets washed away and disappears. But salt accumulates in soils and groundwater and takes decades to get flushed out.”

The researchers documented sharp chemical changes in many of the country’s major rivers, including the Mississippi, Hudson, Potomac, Neuse, Canadian and Chattahoochee Rivers. Many of these rivers supply drinking water for nearby cities and towns, including some of the most densely populated urban centers along the Eastern Seaboard.

According to Kaushal, most freshwater salinization research has focused on sodium chloride, better known as table salt, which is also the dominant chemical in road deicers. But in terms of chemistry, salt has a much broader definition, encompassing any combination of positively and negatively charged ions that dissociate in water. Some of the most common positive ions found in salts—including sodium, calcium, magnesium and potassium—can have damaging effects on freshwater at higher concentrations.

“These ‘cocktails’ of salts can be more toxic than just one salt, as some ions can displace and release other ions from soils and rocks, compounding the problem,” said Kaushal, who also has an appointment in UMD’s Earth System Science Interdisciplinary Center. “Ecotoxicologists are just now beginning to understand this.”

The current study is the first to simultaneously account for multiple salt ions in freshwater across the United States and southern Canada. The results suggest that salt ions, damaging in their own right, are driving up the pH of freshwater as well, making it more alkaline. Over the time period covered by the study, the researchers concluded that 37 percent of the drainage area of the contiguous United States experienced a significant increase in salinity. Alkalinization, which is influenced by a number of different factors in addition to salinity, increased by 90 percent.

“Our study is the first to document a link between increased salinization and alkalinization at the continental scale. Until now, we didn’t fully appreciate the role that different salts play in altering the pH of streams and rivers of our country,” said study co-author Gene Likens, president emeritus of the Cary Institute of Ecosystem Studies and a distinguished research professor at the University of Connecticut. “Salt content and pH are fundamental aspects of water chemistry, so these are major changes to the properties of freshwater.”

The root causes of increased salt in waterways vary from region to region, Kaushal said. In the snowy Mid-Atlantic and New England, road salt applied to maintain roadways in winter is a primary culprit. In the heavily agricultural Midwest, fertilizers—particularly those with high potassium content—also make major contributions. In other regions, mining waste and weathering of concrete, rocks and soils releases salts into adjacent waterways.

“We found that the pH of some rivers started increasing in the 1950s and ’60s—decades before the implementation of acid rain regulations,” said Michael Pace, a professor of environmental sciences at the University of Virginia and a co-author of the study. “We also observed increased salt concentrations in the Southeast, where they don’t apply road salts. These surprising trends presented a puzzle that our team worked together to solve.”

In the water-starved desert Southwest, where salt concentrations have historically been very high, Kaushal and his colleagues documented an overall decrease in salinity over time. The researchers attribute this decrease to a variety of factors, including changes in land and water use, coupled with an effort on the part of Western state and local governments to reduce salt inputs and improve water resource management strategies. For example, in 1973, the seven Western states included in the Colorado River Basin created the Colorado River Basin Salinity Control Forum to support salinity control efforts.

Kaushal noted that many strategies for managing salt pollution already exist. Evidence suggests that brines can be more efficient than granulated salt for deicing roads, yielding the same effect with less overall salt input. Pre-salting before a major snow event can also improve results. Kaushal also said that many Mid-Atlantic and northeastern cities and states have outdated and inefficient salt-spreading equipment that is long overdue for an upgrade.

“Also, not all salts are created equally in terms of their ability to melt ice at certain temperatures,” Kaushal added. “Choosing the right salt compounds for the right conditions can help melt snow and ice more efficiently with less salt input, which would go a long way toward solving the problem.”

Kaushal and his colleagues note similar issues with the application of fertilizers in agricultural settings. In many cases, applying the right amount of fertilizer at the right time of the season can help reduce the overall output of salts into nearby streams and rivers. The researchers also note that more careful urban development strategies—primarily building further from waterways and designing more effective stormwater drainage systems—can help reduce the amount of salt washed away from weathered concrete.

“As a society, we’re addressing the water quality issues of sewage, wastewater and nutrient loading,” said Tom Torgersen, director of the National Science Foundation’s Water Sustainability and Climate program, which funded the research. “But our impact on water quality remains significant as a result of our increasing population, the size of our built infrastructure and other factors. Management of water quality impacts remains a challenge.”

The researchers also note the need to monitor and replace aging water pipes throughout the country that have been impacted by corrosion and scaling, or the buildup of mineral deposits and microbial films. Such pipes are particularly vulnerable to saltier, more alkaline water, which can exacerbate the release of toxic metals and other contaminants.

“The trends we are seeing in the data all suggest that we need to consider the issue of salt pollution and begin to take it seriously,” Kaushal said. “The Environmental Protection Agency does not regulate salts as primary contaminants in drinking water at the federal level, and there is inconsistency in managing salt pollution at the local level. These factors are something communities need to address to provide safe water now and for future generations.”

The research paper, “The Freshwater Salinization Syndrome on a Continental Scale,” Sujay Kaushal, Gene Likens, Michael Pace, Ryan Utz, Shahan Haq, Julia Gorman and Melissa Grese, was published in the January 8, 2018 Early Edition of the Proceedings of the National Academy of Sciences.